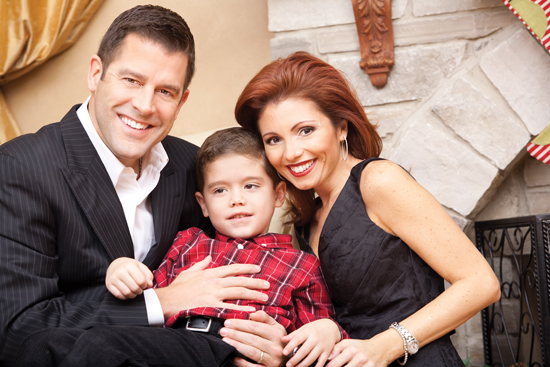 I sat down with the Johnsons in their Hinsdale home to get a glimpse into your local celebrity’s home life with wife Stacy and son Jaden. Stacy greeted me at the door in her black holiday cocktail dress and fabulous Brian Atwood glitter shoes, laughing, “I always dress like this on Monday morning!” Rob sauntered up wearing a suit, red tie in hand, as if to go on air any minute. And Jaden bounded up full of energy and curiosity. I felt like an old friend.

A Little Aspen Without the Mountains

Stacy grew up in Texas and Rob in Arkansas. They met in Houston, where Rob worked with the NBC station, and married in Aspen. After living in the Lakeview area of Chicago for five years while Rob was at ABC 7, the couple decided it was time to move out of the city to start a family. They fell in love with Hinsdale.

“It was a little Aspen without the mountains,” says Stacy. They purchased their home when it was nearly built, adding their own finishing touches, including a finished basement with wine cellar for Rob and decorating a là Stacy herself—she made the window treatments and re-upholstered the chairs. Jaden came along not too long after, and the tight-knit family of three love life here.

The Johnsons can often be found at Elm School’s park, where Jaden plays AYSO Soccer. (Rob and Stacy co-coached his team last year.) In seasonal months, the Johnsons swim, play tennis and golf, and have lunch at Ruth Lake Country Club, where they are members. And, they treasure any time they can get with just the three of them at home.

Christmas Memories and the Elf on the Shelf

Like most of us, the Johnsons treasure their simple traditions most.

“Between Thanksgiving and Christmas Eve, the Elf on the Shelf comes out,” explains Stacy of the tradition inspired by The Elf on the Shelf book by Jackie Mims Hopkins. The pixie elf moves around the house in the middle of the night watching children and reporting to Santa at the North Pole. When Jaden wakes up each morning, he searches for his elf, named Red.

“On Christmas Eve, we go to church at Christ Church of Oak Brook and then pick up Chinese food at Jade Dragon to bring home and eat together,” says Stacy. “We put out reindeer food and cookies and chocolate milk for Santa.”

Stacy is busy planning for this year’s additions to her beloved Christmas Memories Book that is bursting with cards and mementos. “We fill it up with special memories of all the activities we do—holiday parties, visitors, gingerbread houses, dinners we cook, and the annual Hinsdale Holiday Walk,” she explains. 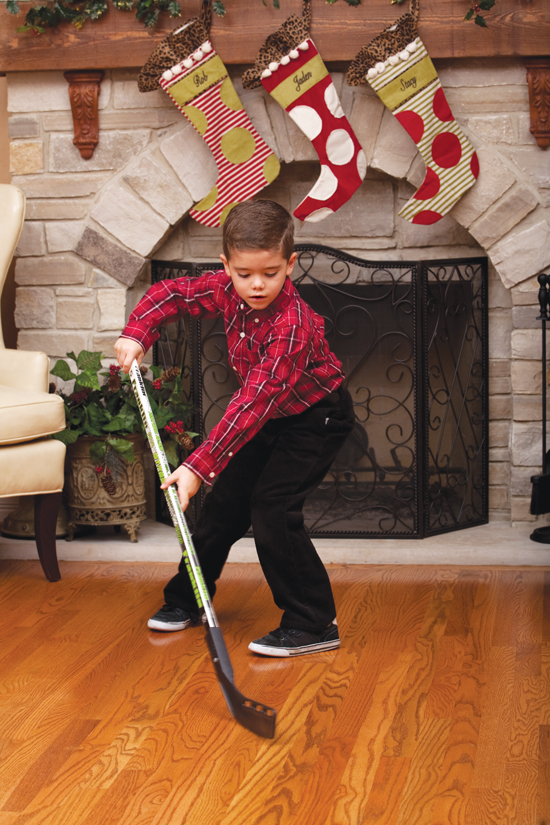 Jaden thinks it’s “kinda cool” that his dad is on TV, but he clearly likes the limelight, too. Rob was happy to let his son upstage him for this interview. The most important thing to know about Jaden is that he loves hockey—lives, plays, breathes hockey and goes to as many Blackhawks games as his parents will allow. He started playing at age 4, and at 6 is the youngest member of the Chicago Hawks travel team. He also loves school and was inspired by his favorite book, Shark vs. Train, by Chris Barton and Tom Lichtenheld, to be a writer when he grows up—stories about hockey, of course.

“Our jerseys are blue and white,” says Jaden. “My practice jersey is #91 and my real jersey is #83.” Jaden’s love for ice hockey probably stems from Rob’s own—he took up the sport as an adult.

“The three of us are really close as a unit,” says Stacy. “We do everything together. I am head room parent and photographer for Jaden’s class at Elm School. And Rob emcees the school’s annual fund-raiser.”  The Johnson “family sandwich” is not actually food, but their group hug with Jaden smashed in the center. The three treasure weekends, summers together, and lunch.

“I love Zak’s Wrap from Zak’s Place,” says Stacy, but Jaden favors “The Baking Office” (aka Einstein Bros. Bagels). No one knows why he started calling it that as a toddler, but the name stuck. “I like their blueberry muffins after hockey, and their garlic bagel,” he reports. They also frequent Nabuki and Egg Harbor Cafe in Hinsdale.

For Rob, giving back tops his list of things to do and talk about, especially helping people with disabilities. He’s known to dash off between the 5 and 10 p.m. broadcasts to emcee a benefit, and many of his and Stacy’s date nights are black-tie affairs for philanthropic organizations.

“I have a brother with Down syndrome who is turning 40 this year,” says Rob. “So we support the Brain Research Foundation (BRF).” The Johnsons recently hosted a social event in their Hinsdale home to educate friends, neighbors, and acquaintances about the important work BRF does.

This fall, Governor Pat Quinn proclaimed September 22 “Rob Johnson Day” for his work with Neumann Family Services, a Chicago organization that has been helping individuals with developmental disabilities and mental illness for 60 years. Rob Johnson was honored for his tireless advocacy for these individuals and their families.

Rob also emcees events and supports local organizations such as Hinsdale Center for the Arts, Wellness House, and the Hinsdale Humane Society. 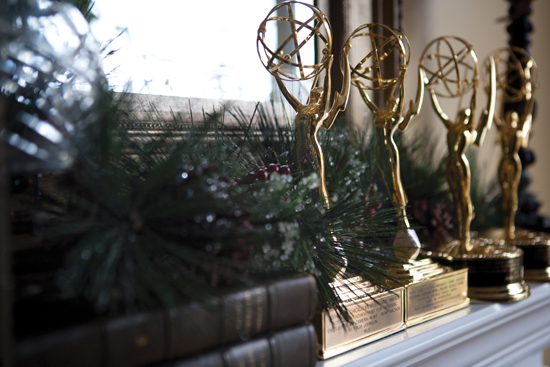 When asked about his five Emmys sitting on the desk in his home study, Rob doesn’t miss a beat, “I’m more proud of Rob Johnson Day than the awards I’ve received.”

“I’m honored by the Emmys,” says Rob. “It’s a compliment to be recognized by peers for work that you do. But the most important thing I do day in and day out is deliver consistent, quality news reporting with my CBS team. What means the most is the relationship we have with the people who watch us. We are giving a voice to to those who don’t have one.”

As to significant moments in his journalistic career, Rob replies, “Covering Hurricane Katrina was the most heart-wrenching and disturbing story—to see a place in America that was destroyed in every way. It was heartbreaking to see what it had become, but it was an important story to tell. I was honored to bring the story back to Chicago.”

Rob contrasts covering tragic events with covering the Super Bowl, “When everybody’s happy,” he smiles; “or having a front row seat to history being made when we anchored our shows in the field from wherever Barack Obama was campaigning for president.” He even sang karaoke at Davenport’s Piano Bar with the Karaoke Queen for one of his “Your Chicago” weekly segments with Kate Sullivan.

But it is clear that Rob is family man first, celebrity second. “We are entrenched in the Hinsdale and Chicago communities,” sums up Rob. “Everybody here [in Hinsdale] is pretty low-key and supportive; it’s not a big deal that I am on TV.”