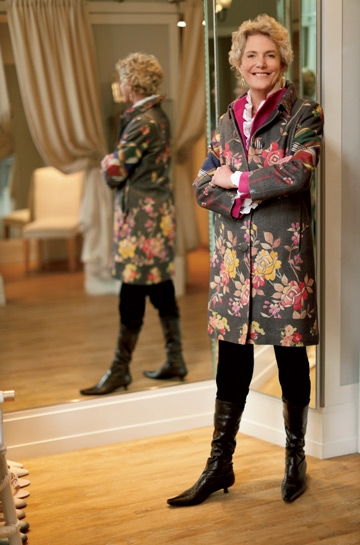 THE LAKE FOREST SHOP celebrated its 100th anniversary in dazzling fashion last September. It was an occasion for owner Ellen Stirling to thank her long-time customers, and an opportunity for the community to show its appreciation to the woman who had ushered this iconic institution into its next century.

Sadly, Stirling passed away after a lengthy illness just eight weeks following this magnificent party. She was 73.

“It still doesn’t seem real that she’s gone,” says Zaskia Herrera, a Lake Forest Shop employee who worked with Stirling for more than 25 years. “Ellen never let anything get her down. She always bounced back.”

It was just this spirit that unexpectedly thrust Stirling to the helm of The Lake Forest Shop nearly 40 years ago.

“I never knew my grandmother, but from what I hear she was a real pistol,” Stirling once said. “I wish she was a customer of ours today because she couldn’t stop shopping. She would buy closets of clothes until she finally didn’t have room for anything more. So, my grandfather suggested she open a store.”

The Lake Forest Sports Shop first hung its shingle in 1922.

In many ways, the Lake Forest Sports Shop was ahead of its time. Stirling viewed her grandmother as a visionary, bringing separates to the shop—much like her friend Coco Chanel was doing in France. 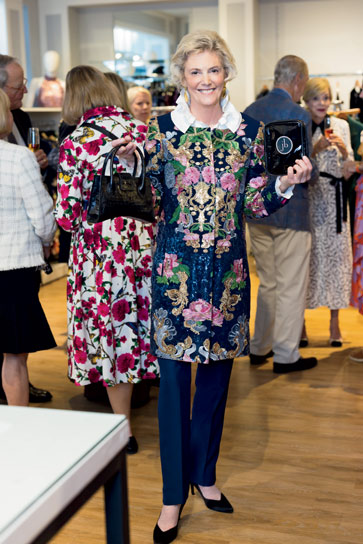 The next several decades were an exciting time for this new retailer. A wonderful woman named Millie Duncan was hired to manage the shop. The store was wildly successful, leading Foster to open a second location in Hubbard Woods.

“Condé Nast came into my grandmother’s life at a really critical time,” Stirling said in an interview of the media magnate who published titles like Vogue, Vanity Fair, and The New Yorker and who married her aunt. “He was able to introduce my grandmother to designers and clientele that helped the store thrive and connect her to the fashion world in a way that wouldn’t have been possible without him.”

Then, in the 1950s, Stirling’s parents Adair and Volney Foster took the shop over from her grandmother and launched the Lake Forest Sports Shop in Barrington and Hinsdale.

“My parents ran the shops more like a hobby than a business,” Stirling said. “And in the ’80s, the brand really began to struggle, and my father considered closing it. But I knew we had something special with our stores and I told my father that I’d be interested in taking them over.”

With no prior retail experience when she stepped in, Stirling’s first move was to close the satellite locations. She had three little girls and needed to focus her energies on the Market Square store. By 1992, she paid off the store’s debt and set the retailer on the road to success.

Stirling often said if she could go back and change one thing about her early days at the store, she would have dropped the “Sports” from the name of the store sooner. The tales were many about employees getting calls about golf clubs or tennis rackets. But it was one fateful Christmas Eve when a gentleman walked in looking for a bowling bowl when Stirling had enough. The store was immediately rebranded to “The Lake Forest Shop.”

One of the keys to the shop’s storied longevity was the autonomy she gave to each of her employees.

“Even though Ellen was the ‘boss,’ she made each of us the boss of what we did,” adds Hererra. “She believed in us before we believed in ourselves.”

Stirling’s relationships with her customers and vendors were the lifeline of the store.

“We teased her about being old school,” says Hererra. “We would tell her that everyone expects emails and texts these days, but Ellen wanted us to call our customers. She knew how powerful it was to have that connection with clients. That’s why so many of her customers—and our vendors too—have been with us for so many years.”

To an outsider, it may have appeared that Stirling ran a pretty tight ship, but her employees often saw a softer side.

“When I first started working for Ellen, my hours lined up with the times my children were in school,” says Stirling’s personal assistant, operations manager, and unofficial keeper of her many, many lists Melissa Zaprzalka. “That first year, as it got close to my children being on summer break, I was so anxious about how to juggle my job and my family responsibilities. When I finally brought this up with Ellen, she told me to stay home for the summer—that the work would still be there when my kids went back to school in the fall. She always put family first.”

“And she always made us feel as if we were her family, too,” adds Dawn Skoien, one of Stirling’s more recent hires who began at the shop in 2018. “When I first started, I was so touched to see the entire staff eat lunch together every day in the sewing room—Ellen too. It was such a nice way for us to all connect personally. Ellen loved sharing stories about her daughters and her grandchildren. Her family meant everything to her.”

Stirling’s sense of community stretched well beyond the four walls of her store and deep into the City of Lake Forest and greater Chicago area.

Stirling believed these wonderful nonprofits were the soul of Lake Forest and by highlighting them was signaling to the rest of the community that they needed to support them.

While Stirling grew up in a culture where people didn’t boast of their accomplishments, she had many. Service and philanthropy were part of her makeup.

Her work with the Rehabilitation Institute of Chicago (now the Shirley Ryan AbilityLab) and its founder, Henry Betts, M.D., along with architect and accessibility advocate Jack Catlin, formed Access Chicago, a nonprofit that addressed wheelchair accessibility for people with disabilities in 1972.

Stirling served on the Advisory Board of Lake Forest College’s Oppenheim Center for Entrepreneurship and Innovation. She was also a board member of Lake Forest Open Lands and Elawa Farm Foundation and a member of The Lake Forest Garden Club.

And finally, the History Center of Lake Forest-Lake Bluff named Stirling its Local Legend in 2016. The distinction—all previous individual awardees were men—honors someone who has contributed significantly to the community and the world.

As Stirling’s husband of 52 years, daughters, grandchildren, friends, clients, and colleagues begin to move forward without her, they do so knowing she left the world a better place.

“It’s so hard to describe Ellen,” says Lidia Schiavo, one of the shop’s talented seamstresses whose time at The Lake Forest Shop dates back to when Stirling’s mother still ran it. “Ellen was Ellen and we loved her so.”