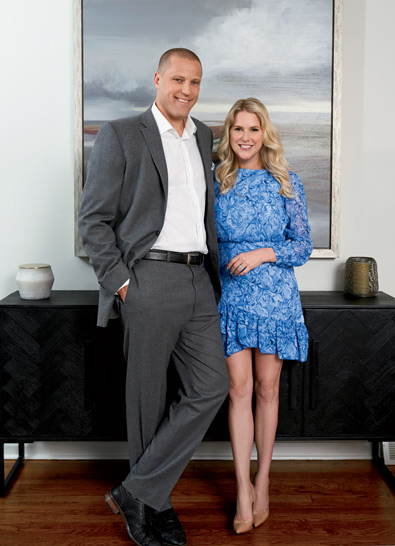 ANDY BOHNKER can’t help himself. A ride from the Lake Forest Train Station to his family’s home in west Lake Forest requires detours. He chauffeurs this writer through some of his favorite streets and scenes around town, offering knowledgeable commentary. The City of Lake Forest should hire him to be an ambassador.

Andy and his wife, Brooke, moved to Lake Forest from Chicago’s Roscoe Village neighborhood in late 2020. Like many younger families living in the city, the couple and their now two daughters, Birdie and Millie, were unsettled by the pandemic and the other challenges of urban living and sought the tranquility that can be found on the North Shore.

Andy and Brooke welcomed me into their home on a sunny morning in late September, ushering me on a tour of the house and its well-kept grounds. Looking around, it was obvious why they migrated north.

“Both of us are from smaller communities and we wanted to have that type of feel. We didn’t know what that was going to look like, but we came here and spent some time here,” Andy says. “We were never planning to stay and raise a family in the city. Nothing against doing that, but that’s not how we grew up. That’s just not what we wanted.”

Andy hails from the small farming community of Story City, Iowa (population 3,500), just north of Ames, while Brooke was raised in Culver, Indiana (population 1,300), about two hours southeast of Chicago. While both found their way to big cities after college to pursue their professional careers, Andy in New York and Brooke in Chicago, but they carry home with them.

“I grew up in a small town on a lake but surrounded by cornfields,” Brooke says. “It was super small, and I could ride my bike just about anywhere. I had a big backyard and lots of friends in the neighborhood. There was a real sense of community and that was important to us when we were looking where to move.”

Andy also grew up in a farming community.

“If you went literally a half a mile from my house in any direction you were standing in the middle of cornfields,” he says, explaining that his mother and stepfather still live on a farm where Andy grew up. When I paid my visit to them in September, Andy, Brooke, and the kids had just returned from a weekend visit to see his parents. It was obvious Andy is still emotionally attached to the rural life.

“We knew we were never going to get that kind of living in any suburb of Chicago, but we were trying to find something that felt close to that, and we fell in love with where we are now,” he says.

You’d need a Venn diagram to illustrate how Andy and Brooke got together. It’s a somewhat complicated yet serendipitous story that involves mutual friends from New York and Chicago, romantic attachments to others at the time they first met (that’d be Brooke), and other assorted adventures.

“We first met at a dinner between mutual friends, then began dating and two years later we were married,” Andy says.

Done deal. The two were married in 2017 at Culver Academy, a historic prep school in Culver, Indiana where Brooke went to school. They tied the knot in the same chapel where Brooke’s parents were married. Two years later Birdie came along. A sister for Birdie, Millie, the only Lake Forest native in the family, made her presence known last year. With both parents being employed—Andy is in Media Sales at the National Football League and Brooke works at Jameson Sotheby’s as a real estate broker—there’s no shortage of activity in the Bohnker household.

The couple had no previous ties to Lake Forest, so the move to the area was something of a roll of the dice. Their siblings are scattered across the country and the globe (Brooke’s identical twin, Brittney Rahn, currently lives in Hong Kong with her family). But they’ve found a community they can truly call home and, somewhat surprisingly, other young families they can bond with.

“It took a while to feel like home in the actual house because at the time there were supply chain issues with furniture, but our neighbors were very welcoming,” Brooke says. “There are five houses on our street and every single one of our neighbors brought us meals or flowers or wine or champagne. They really gave us that community feel that we wanted so badly.”

Andy notes that one neighbor, Eileen Looby Weber, invited he and Brooke and the kids over to socialize in their backyard when social distancing was still in effect. A Lake Forest alderman and owner of Lake Forest Flowers, Weber and her extended family, lifelong residents of Lake Forest, all live nearby the Bohnkers and quickly helped Brooke and Andy plug into the community.

“You’re moving away from close friends that live in Lakeview to a place that’s a 45-minute drive away and you definitely feel like you’re on an island for a little bit” Andy says. “But the community aspect here and how quickly neighbors welcomed us made the transition easy.”

What Andy and Brooke also found when they moved to Lake Forest are other families with young children, reflecting the trend during the pandemic of younger families moving out of the city. 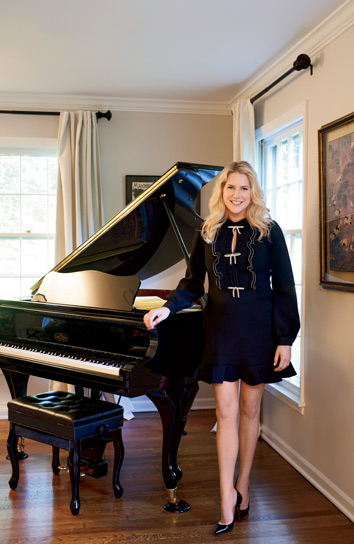 Brooke is wearing dress by Self-Portrait, available at Lillie Alexander photography by Lisa Sciascia / hair and makeup by Cathleen Healy

“I have been surprised by the number of people we have met that are literally in the same boat,” Brooke says. “They have no friends or family around here but moved here the same way we did. There’s a lot of turnover here with younger families moving in.”

During his early years in college in Minnesota, Andy met Father Paul Wierichs, who at the time was the chaplain of the FBI in New York. Andy was heavily influenced by Father Paul, and faith remains an integral part of the life he and Brooke are shaping in Lake Forest. Soon after moving, they joined Christ Church in Lake Forest.

“When we moved to Lake Forest, we knew we wanted to join a church,” Brooke says. “Growing up the church and the church community were a cornerstone of our upbringing and it’s important to us that we give our girls that foundation as well.”

My visit with Brooke and Andy ends with the couple driving this tourist back to the train station. Once again, Andy can’t help himself. We take a long route through Lake Forest neighborhoods and then a drive by Forest Park Beach.

What I hear in their conversation, what I detect in the banter, is a couple, a family, that feels very much at home.