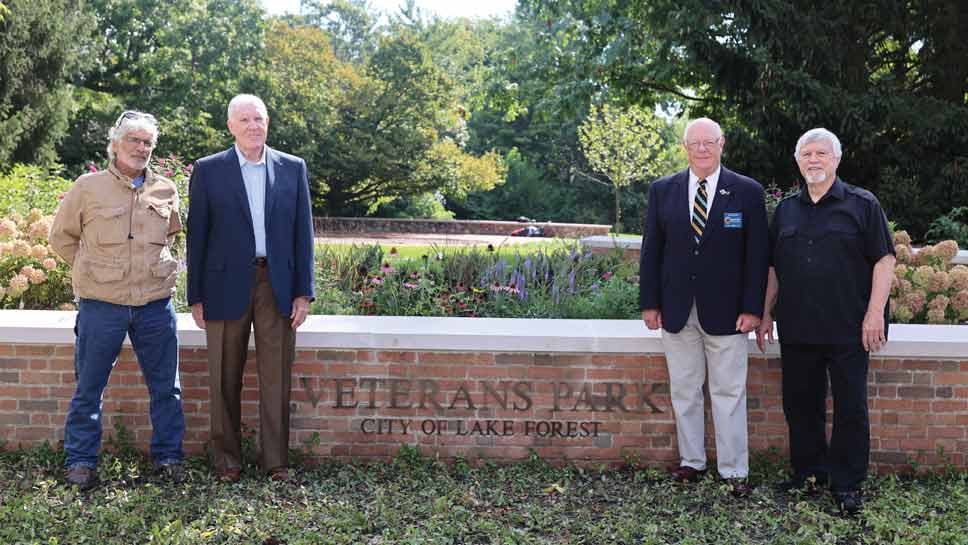 This has long been the mantra of the American Legion McKinlock Post No. 264 in Lake Forest when it came to building a monument honoring the thousands of local residents who have served in the armed forces.

“Our post has been around for more than 100 years,” explains Ed Geraghty, former commander of Post No. 264 who is now leading the legion’s efforts to create a monument in the new Veterans Park. “Last year, the city approached us and said they had a park for us. We finally had what we needed to get started.”

Sitting at the southeast corner of Green Bay Road and Deerpath, Veterans Park is the culmination of over a decade of effort by McKinlock Post. The goal of the Post has always been to provide the community with a highly visible reminder of the role the armed forces play in guaranteeing freedom and keeping the peace.

“This has been a community project from all angles,” Geraghty adds. “The American Legion really can’t take any credit—it’s been the City, Parks & Recreation, and a number of generous donors coming together to make this happen. The city gave us the land and a loan to get the designs for the monument underway. Parks and recreation have been doing the landscape design and maintaining the park. The legion has been mostly behind the scenes, just facilitators for all of this.”

“As we’ve worked through this project, it’s been really important to us to design a monument that was significant enough to adequately honor the ultimate sacrifice these veterans made,” says Tom Marks, current commander of Post No. 264 who is leading the fundraising efforts for this initiative. “We want people to stop and take note of what these people did for our country.”

Post No. 264 set out to build a world-class monument and were thrilled to discover a world-class artist to design it right in Lake Forest. The artist, Gary Tillery, is a 30-year resident of Lake Forest, a Vietnam veteran, and works with the Fine Art Studio of Rotblatt Amrany in Highwood. Tillery has many monuments to his credit, including designing the sculpture for Chicago’s Vietnam Veterans memorial in 2005.

The monument will be situated in the heart of Veterans Park. There will be a sculpted bronze eagle symbolizing the national character of the United States and its ideals set against a backdrop of a high-glaze black granite (coming from South Dakota) and stainless-steel stars and stripes. Finally, there will be separate panels listing the names of the 31 Lake Forest residents who were killed in action during all conflicts since WWI. The base of the monument will display the emblems of all six branches of the U.S. Military.

“We’re making sure to leave room to add names of future veterans who lose their lives serving our country,” Geraghty says. “There will also be a QR code on the monument that visitors can scan and submit information they may have on the veterans we’re honoring.”

The American Legion was chartered and incorporated by Congress in 1919 as a patriotic veterans’ organization, right at the end of World War I. It remains the nation’s largest wartime veterans service organization, committed to mentoring youth and sponsoring wholesome programs in our communities, advocating patriotism and honor, promoting strong national security, and continued devotion to fellow servicemembers and veterans.

Soon after the organization was founded, a group of Lake Forest veterans organized the George Alexander McKinlock Jr. Post. McKinlock, who was with a machine gun group in France, was believed to be the first Lake Forester killed in action during the First World War.

The American Legion McKinlock Post No. 264 has long served a special role in the City of Lake Forest. In addition to helping with local celebrations on Memorial Day and Veterans Day, they’re responsible for placing the American flags throughout the city on designated national holidays, they play Taps at the funerals of veterans, they mentor local scouts troops, and they host the Lake Forest Day Parade and beloved two-day carnival.

“It still surprises me how many people don’t know we’re here,” says Marks of Post No. 264. “We welcome anyone of any age who has served in the military to join us. It’s a small-time commitment and a modest financial contribution.” Annual dues are $40 and while the post meets a few times each month, members can come in and out of meetings as their schedules permit.

As the local chapter of the American Legion nears the end of this project and closes in on its $350,000 fundraising goal to cover the costs of erecting the monument, the reality of what they have created has begun to set in.

“My father served in the Navy, so when Vietnam began I thought it was my duty to join the military,” Geraghty explains. “My mom and dad were so mad when I joined the Army. But I was fortunate. The Army made me an agent and sent me to Europe during the war. When I came home, I made a vow to honor the memories of those who weren’t as lucky and gave up so much for our county. Veterans Park takes me one step closer to keeping this promise.”

To learn more about the American Legion McKinlock Post No. 264, get involved, or to make a contribution to the Veterans Park monument, visit americanlegionlakeforest.org/donate.