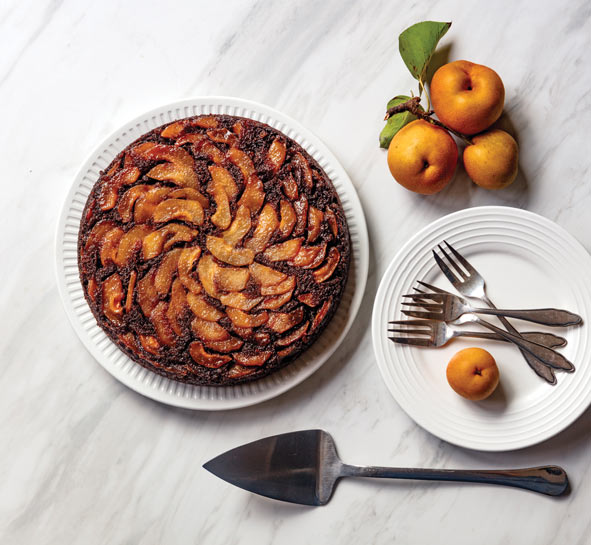 WITH THE HOLIDAYS coming and sugarplums dancing in your head, it’s a good bet the enticing smells of baking will fill your kitchen soon. In our house, gingerbread is a favorite—most recently in the form of this delicious cake with its pudding-like topper of brown-sugar butter melted into golden pears. Given a big bag of tiny golden Asian pears from a friend’s tree, I used those here, sliced two ways. For one cake, I cut the pears in round slices, removing the seeds. For the other, I sliced the pears as I would apples (peeled, cored, and quartered) and shingled the slices in a pretty spiral. I like them quartered and shingled best, but either way works—your choice. With three kinds of ginger (candied, fresh, and powdered) plus cinnamon, cloves, nutmeg, and molasses in the batter, the flavor and aroma of the gingerbread is beautifully rich, but not overpowering. Serve the cake warm, with a dollop of whipped or iced vanilla cream.

For the Ginger Pear Topping: 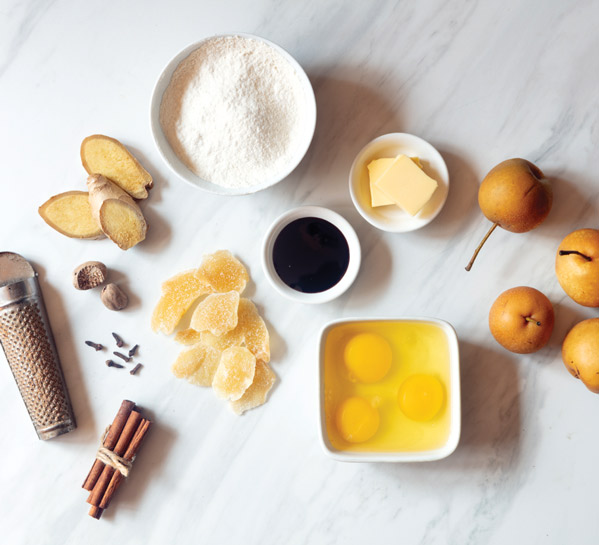 With oven rack in center position, preheat oven to 325 degrees. Generously grease bottom and sides of a 9-inch cake pan. Set aside. On cooktop, over medium heat, melt all but two of the pats of butter with the brown sugar, stirring until everything is melted. When the mixture just begins to bubble, add last two pats of butter and continue stirring until mixture boils. Remove from heat and pour mixture into the bottom of the cake pan. Starting at the center of the pan, spiral pear slices to the edge of the pan, turning pan and tucking in rows of pear slices until bottom of pan is completely covered with the pear slices. If you have extra slices, arrange those over the first layer. Set pan aside. In a small bowl, whisk spices (ground ginger, clove, cinnamon and grated nutmeg) with flour and add pinch of salt. Set aside. In the bowl of a stand mixer with paddle attachment at medium speed, beat butter until fluffy. Beat in brown sugar. Beat in eggs, then molasses and fresh-grated ginger. (The fat won’t completely mix with the eggs and molasses, but that’s okay.) Add half of the flour mixture and beat until smooth and no streaks remain, scraping down sides of mixing bowl and paddle as needed. Mix 2 Tbsp boiling water with 1 tsp baking soda and mix into batter. Add remaining flour mixture and beat until no streaks remain. Turn speed up to high for 3 seconds. Turn off mixer. Stir in minced candied ginger. Spread batter over the pears in the cake pan, smoothing to level top. Place pan in oven and bake for 50 to 55 minutes at 325 degrees until cake springs back when touched. Remove from oven. Cool for a few minutes on a rack. Slide sharp knife around edge of cake pan to loosen cake from sides of pan. Invert cake onto serving platter. Serve warm with a bowl of whipped or iced vanilla cream at table.