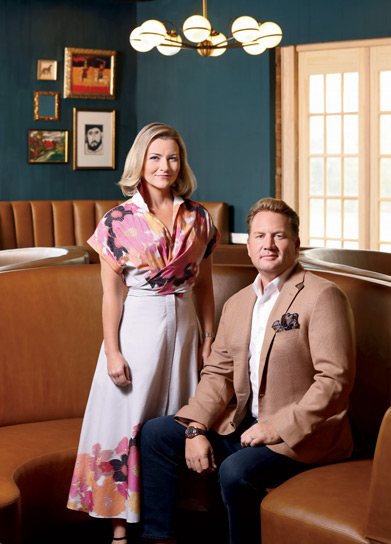 IT’S A MONDAY or a Tuesday in Lake Forest. Casually dressed diners enter Sophia Steak on Laurel Avenue at night, glance at the surroundings, and are immediately struck by the warmth of the place.

The employees’ smiles—here and there and everywhere— make it feel even toastier.

Orders are placed. A conversation commences. The steakhouse vibe kicks in.

Now everyone is beaming.

Fast forward to the following weekend. Some of the same diners return, this time dressed to the nines— maybe even to the ninety-nines.

“We want people coming straight from the golf course early in the week to enjoy Sophia Steak as much as the couple on a date or a family get-together will on a Friday or a Saturday night,” says Ryan O’Donnell, cofounder with wife Anna of Ballyhoo Hospitality, which, with the opening of Sophia Steak-Lake Forest in mid- October, now boasts eight restaurants under the enterprise’s retractable-roof-sized umbrella since its launch in 2018.

The latest high-profile entrant in Ballyhoo’s fold upped the number of its eateries along the North Shore to four, following the French café/bistro/brasserie/bar Pomeroy in Winnetka and Buck Russell’s and Sophia Steak in Wilmette.

“We’re excited to expand our footprint on the North Shore,” adds Ryan, who graduated from Loyola Academy in Wilmette in 1995 and earned a degree from Kendall College’s Culinary Hospitality School in Evanston. “I don’t just love the golf courses in Lake Forest; the history of the city is special, too.

“We’re thankful, and grateful, that we get to be a part of Lake Forest’s attractiveness, and we’re excited to show the community what we can do.”

Mr. and Mrs. O’Donnell, who have been married for 13 years and are raising three sons, moved to Wilmette in 2022 after living in Chicago for 17 years, a transition Anna described as “a drastic change but a lovely change as well.” Ballyhoo Hospitality’s Chicago spots are Gemini (Lincoln Park), Coda di Volpe (Lakeview), Old Pueblo Catina (Lincoln Park), and Andros Taverna (Logan Square). 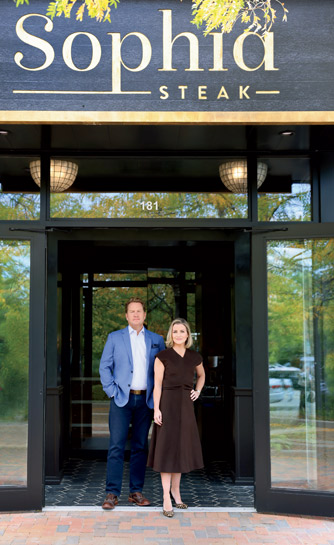 So the establishment of Sophia Steak-Lake Forest marks the first time Ballyhoo Hospitality created a second restaurant with a similar concept to one of its forerunners. Sophia Steak-Wilmette, born in 2020, is located at 1146 Wilmette Avenue.

“Both Sophia Steak restaurants have a similar feel, décor, and atmosphere,” says Anna, who got her degree in Organizational Business at the University of Illinois in Urbana-Champaign. “The big difference is the gorgeous courtyard out front in Lake Forest. Downtown Lake Forest is beautiful, and we would like nothing more than to make Sophia Steak a popular gathering place in the community.

“We want it to be a place where people go to celebrate or go to for a special date,” she adds. “But we’d be most thrilled if it becomes the place where people always run into people they know and enjoy the wonderful atmosphere together.”

Ryan and Anna got to know each other through work. Ryan was a sous chef and Anna a server when each reported to Glenn Keefer at Keefer’s Restaurant in Chicago. Glenn Keefer is to steakhouses what Boeing is to airplanes.

GIANTS in their respective industries.

“He’s such a huge resource for us,” Ryan says. “Glenn’s expertise in the steakhouse business has been first-rate for decades. But he also has a broad skill set in other fields, from insurance to HR to other administrative areas.

“It’s certainly nice to have a lifelong restaurant man like Glenn as one of Ballyhoo’s partners.”

Were Ryan to make an order right this second at Sophia Steak-Lake Forest he’d start with, well, a starter: Crispy Lobster & Shishitos. And then he’d follow that up with Steak Sophia, the restaurant’s signature entrée: a choice of a 10-ounce Prime Flat Iron or an eight-ounce Filet (peppercorn-crusted, roasted mushrooms, cognac cream).

The Weekend Specials included Fresh Dover Sole (Friday), 16-ounce Prime Rib (Saturday), and Fried Chicken (Sunday). Ballyhoo Hospitality stared the pandemic down in 2020 and survived it, in part, by hatching an incomparable To Go menu/program that continues to hum—and sate—today.

“Times changed,” Ryan says. “Restaurants had to change, or else. To-go fare became a big emphasis for us and we made sure to make it as appealing as possible. Ours became especially successful at Sophia Steak in Wilmette.”

The only thing that rivals Sophia Steak’s vast array of sumptuous offerings is the staff ’s attention to detail and smile-inducing service.

“So much of the success in the restaurant industry comes down to execution,” Ryan says. “We’re successful at what we do because our team is committed to making hospitality a high priority. You do that by putting the guest at ease before they’re treated to high-quality food and drinks.”

Sophia Steak and Lake Forest, together.

Get used to it, folks.

Sophia Steak-Lake Forest is located at 181 East Laurel Avenue in Lake Forest. For more information and a look at the menu, visit sophiasteak.com. Learn more about Ballyhoo Hospitality on the web at ballyhoohospitality.com.