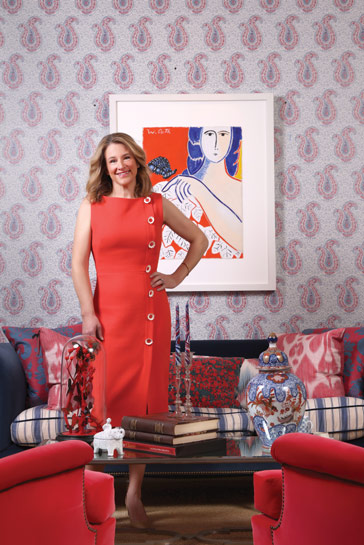 AFTER A three-and-a-half-year hiatus, The Chicago Show: Antiques & Art & Modern returns to the Merchandise Mart October 6 to 9. Co-chaired by Lake Forest resident Keevie Silvay, the weekend will include multiple events for shoppers of all ages.

Benefiting the Woman’s Board of Northwestern Memorial Hospital, The Chicago Show will feature 50 premier national and international dealers of fine antique furniture, jewelry, silver, and decorative and fine arts, dating from ancient to 20th Century designs. This annual show is the largest antique and modernism show in the Chicago area and is a favorite among collectors and designers.

A native of Colorado, Silvay, her husband, and their two daughters moved to Chicago 10 years ago by way of New York. “I had expressed to a dear friend who is on the Northwestern Woman’s Board how wonderful my personal experience had been at the hospital,” says Silvay. “Soon thereafter, she asked if I’d like to get involved and I was thrilled to be able to play a part in supporting such an incredible institution.”

Silvay’s grandfather was the founder of the Evanston Art Center in the 1940s and immersed himself in creating works of art or inspiring creative talent in others—a passion that ignited her appreciation for art and design from an early age and ultimately influenced her decision to chair this year’s event.

She’s especially excited to be bringing in famed interior designer and ambassador of antiques, Alessandra Branca, to be the honorary chair, and Branca’s friend, Bronson van Wyck, one of the world’s leading authorities on hospitality and entertaining, to serve as the Master of Celebrations. Both luminaries will oversee creative direction for the opening night party on October 6, which offers the opportunity for VIP ticket holders to be the first to shop the show alongside them that afternoon.

“Also new this year is the Young Collector’s reduced-price ticket and after party as well as a lecture and luncheon with Branca and van Wyck on October 7,” says Silvay, adding: “On a personal note, we recently moved and I’m looking forward to seeing all the art and decorative objects.”

She advises first-time showgoers to arrive early so they don’t miss a one-of-a-kind curated selection of art and collectibles—and to attend the Thursday night opening party for a first look, of course.

Funds raised for The Chicago Show support the Woman’s Board of Northwestern Memorial Hospital. For more information, visit wbnorthwestern.org.