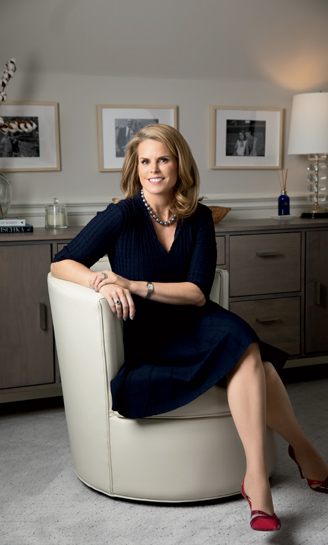 WHEN LAKE FOREST psychologist and concierge life coach Dr. Elizabeth Lombardo founded her EleVive business 2019, she was already famous. Celebrity testimonials on her company website sing praises of her transformational approach to therapy, including one from none other than NBA great Shaquille O’Neal that dubs Lombardo as his “Head Coach for happiness.”

Her career as a best-selling author, keynote speaker, and media guest have made her one of the most sought-after experts in the world for those who seek to harness the power of mindset.

The only difference now is, she’s taking that training to a population that needs it most—teens and their parents.

“I started EleVive right before the pandemic because I began to see a real need to bring adolescents and their parents the same life skills I’d been teaching executives and professional athletes for years,” says Lombardo, who is often referred to in the media as “Dr. E.” “Stress and mental health issues were skyrocketing in our young people. They were getting the medication but not the skills and training necessary to rewire their brain.”

Young people suffering from anxiety or depression often share one common denominator— their thoughts and internal dialogue are almost always negative self-talk, reinforcing messages about what’s “wrong” with them instead of reimagining all that could be “right.”

“My coaches and I provide the life skills training needed to overcome those obstacles and develop habits that enhance emotional intelligence and optimize performance,” says Dr. E, explaining how her patented Neuro-Regenerative Training™ (NRT) uses cutting edge neuroscientific principles to rewire the brain and enhance success. “Today I’m a professional speaker and do a lot of media, but there was a time when I was scared to death to talk to more than three people. When my first book was published, getting the message out there meant being on stages and being on TV. I did a lot of internal work to change my fear-based thinking and get out of my own way.”

One of her fastest growing sub-specialties is in the area of sports psychology and working with young student athletes to do just that.

“Most athletes spend a lot of time focusing on their bodies and yet, it’s our minds that allow our bodies to perform optimally,” she says. “Optimizing mindset and what we are saying to ourselves inside is pivotal to any kind of peak performance, especially in sports. It’s what I would call a secret advantage.”

Dr. E began working with clients who were injured and doubting whether they’d ever return to peak performance. Teaching them to shift their mindset became her secret weapon.

“I had a young client looking to go pro and was having a real mind obstacle. He was performing well in practice but during competitions would not play up to his ability,” she explains, careful to protect the identity of the student athlete. “So, we did a really cool technique and created a memory of his success in winning the ultimate game at the entire competition … it was extremely powerful, rewiring his brain.”

As a result, the young man performed better than he ever thought possible. Another one of her clients was a young high school golfer who was having issues with his putting. He and his parents received Dr. E’s training to overcome a fear of failure on the golf course when all of a sudden, a light bulb went off.

“He said ‘wait a minute, can I use this when I’m stressed out about a test, too?’” she says. “When you’re focused on failure, your subconscious, which controls your body, will impact the performance you’re going to have.”

The concept itself is brilliant in its simplicity. If you could stick a microphone in your brain, what do you hear yourself say? Once a client has that breakthrough, Dr. E says it’s like putting broccoli on marinara.

“They come in for sports, and learn skills to perform better, but they also learn these same skills to help with in all kinds of situations, from academic stress to social stress,” explains Dr. E, who is often enlisted to help “coach” student athletes who are hoping to play their sport in college. “EleVive is for teens and parents of teens and our tagline is to that when you elevate your mindset, you thrive in life.”

With her third book, Get Out of the Red Zone: Transform Your Stress and Optimize True Success, already garnering rave reviews, Dr. E says she will continue to spread her “secret ingredient” to all who need it. And among her Elevive clients, that includes parents.

“These are not skills we’re teaching in schools but when you look at what predicts success, it’s emotional intelligence, stress management, and grit. We provide our teams with these skills and I work with parents to help them help their children,” she adds. “This is a different generation and there are different approaches for us to be better parents for our children. Once they have these skills and resilience, they’ll have them for life.”