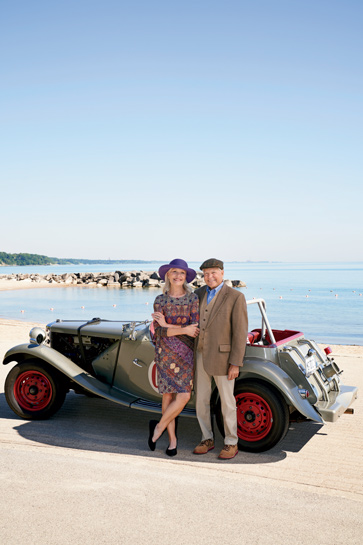 AMERICANS have been obsessed with automobiles for over a century now, each decade ushering in one nifty innovation after another. And while there are always those people (you know who you are) who view vehicles as merely a utilitarian mode of transport, most of us have a romanticized tale (or three) about the cars of our lives and what they mean to us.

Edmond “Ed” Russ and his wife, Tena, have enough of those stories to fill a best-selling novel.

Take the 1953 MG TD/C that the Lake Forest couple brought to this month’s Lake Forest/Lake Bluff Chamber of Commerce “Then & Now” auto showcase. That limited-edition model came straight from the original family that bought it nearly 70 years ago.

Ed says he found the vintage gem online in 2017, and quickly learned it was more than just another MG. This particular automobile was one of only 50 specialty cars that had been tweaked for friends of British Motorcars on the assembly line. Twenty-five of them stayed in England; the other 25 were imported to Norfolk, Virginia.

“All of them were painted Silver Streak Grey, all of them had red wheels, and all of them had a red radiator and red interior,” says Ed, an auto show committee member who has been participating every year since its inception. “The frame is ash, still intact, and it’s really in excellent condition. The only major modification is the addition of a roll bar and sway bar and a little tweaking to the engine. That’s why it’s such a special car.”

But that was just one of many magnificent automobiles on display at the October 2 “Then & Now” showcase, held at West Lake Forest Train Station.

Organized by the Lake Forest/Lake Bluff Chamber of Commerce, the City of Lake Forest, and an advisory committee of auto enthusiasts representing a wide range of cars from exotic and classic to pre- and postwar, vintage European, Rolls Royce/Bentley, and modern luxury speedsters, this year’s “Then & Now” show rolled though for a display of what Ed calls a century’s worth of “driveable art.” 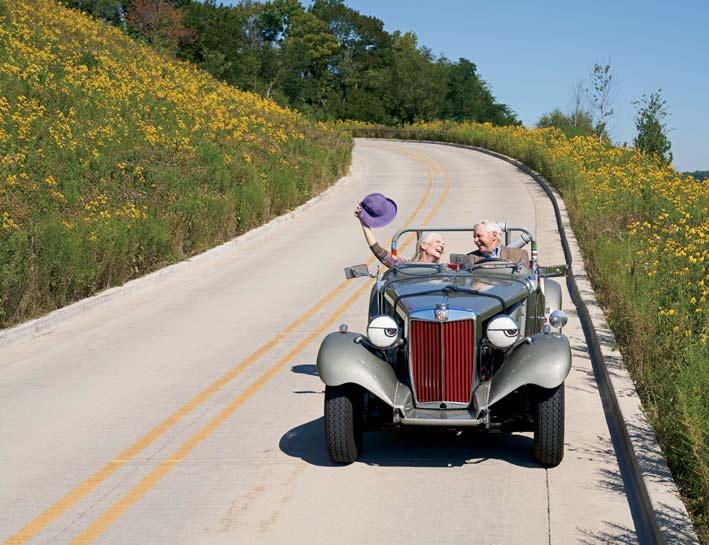 “The auto show is a ‘then and now’ showcase so I brought an almost new Porsche as the new one and the MG as the old one,” says Ed, explaining that the whole reason he bought the 1953 MG TD/C was to replace a Porsche 356 he used to race at Road America in Elkhart Lake. “I have been instructing there since the 1970s. The cars are just so magnificent. You see a million-dollar car on the racetrack and it’s like ‘wow’.”

Interestingly enough, the friend who convinced him and Tena to move to Lake Forest many years ago is the same fellow car enthusiast who got them involved in the showcase— Jim Opsitnik, past president of the Lake Forest Preservation Society.

“Joanna Rolek from the Chamber contacted Elaine and Jim and said ‘we’d like to have an event in West Lake Forest and we were thinking about a different type of car show,” Ed recalls.

It didn’t take long before Opsitnik, Maxson, and Ed began rallying people to get involved and the inaugural “Then & Now” showcase was unveiled in 2019.

“I love the variety of it,” says Tena, who is coming up on her 40th wedding anniversary with Ed, sharing his passion for cars through the decades. “Everybody comes out and it’s just an incredible parade of cars you just don’t see. It’s very special to have some of them there.”

At home, the Russes have a coach house where among the vehicles you’ll find parked there at any given time (aside from the MG) are a 2022 Porsche Macan GTS, 2019 Boxster Porsche GTS, and a 1964 Porsche 356 SC.

“Ed is a fabulous driver and instructor and people come to him for advice and help all the time,” she continues. “We can fit five cars in that coach house so it’s not uncommon to see Ed out there with the hood up and a group of friends.

Tena, who hasn’t driven an automatic in decades (she “got religion” when she met Ed and went back to driving stick), says she loves Road America as much as her husband.

“I never saw as many race cars or Porsches as I saw at Road America. My first trip up there, I came back with a whole lot of photographs, but they weren’t of him or his cars. They were of Mini Coopers,” she laughs. “So, as a result, I’m on my third Mini Cooper now and you can’t pry that out of my hands.”

Ed, on the other hand, has no favorites. He just loves them all.

“Although, there are some unusual cars I like a lot,” he says, noting Bill Knauz’s World War II Jeep and a 1941 Packard, four-door convertible they once owned. 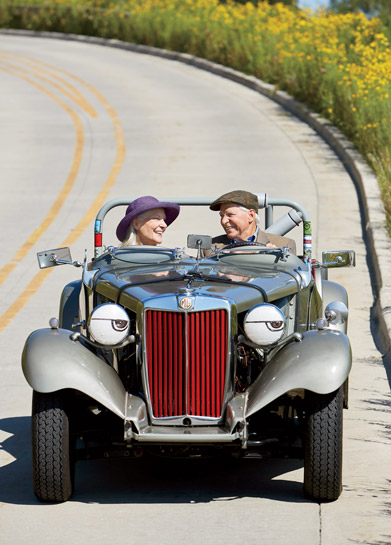 “There’s no way this show could happen without Joanna,” Ed continues, giving props to Rolek and the Lake Forest/Lake Bluff Chamber of Commerce committee. “I like to drive Porsches, race the MG, but so many cars are just fun to look at. Wish I could fit them all in the garage.”

To which, Tena had five words for him: “No room at the inn.”

For more information about next year’s car show or other upcoming events, visit Lake Forest/Lake Bluff Chamber of Commerce at lflbchamber.com.