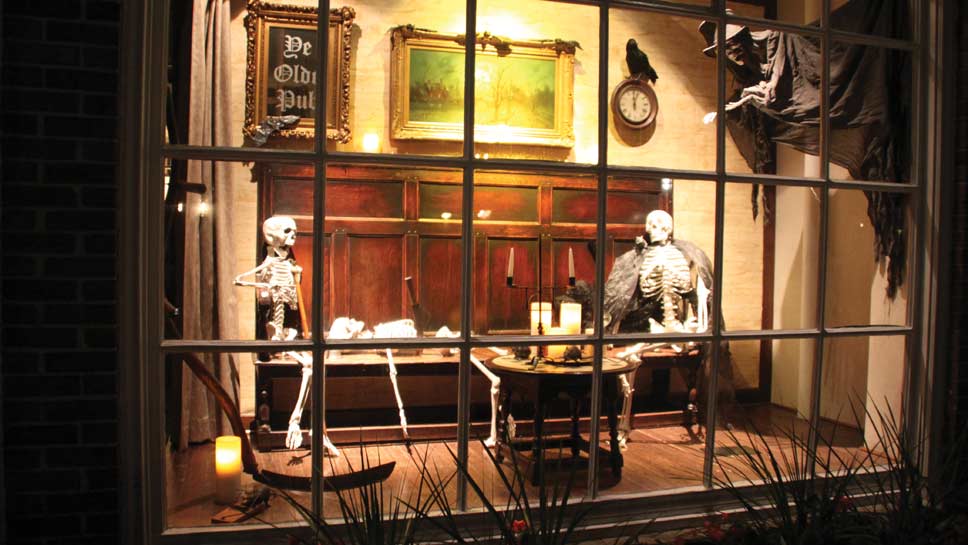 Lake Bluff”s Lawrence Interiors gets in on the act by ghoulishly decorating its storefront windows with a wickedly clever Ghost Walk theme. photography provided by The Lake Bluff History Museum

ON THE EVENING of October 30, 1928, Elfrieda Knaack was found severely burned in the furnace of Lake Bluff Village Hall. She would die in the hospital three days later. The rest of the story is a mystery. Knaack, a local schoolteacher, refused to tell authorities how she might have ended up in the furnace, and who might have put her there.

Theories are tossed about to this day that it could have been a Lake Bluff police officer (back then Village Hall doubled as a police station at night), but a perpetrator was never identified. As a result, there are those who believe Lake Bluff Village Hall is haunted with the ghost of the unfortunate Ms. Knaack.

Knaack’s ghost story is just one of several tales included in the Lake Bluff History Museum’s upcoming Ghost Walk, which will take place on October 21 and 22. The walk is returning after a few years off due to the COVID-19 pandemic, and is the brainchild of Catherine McKechney, a scary story enthusiast who started the tradition in 1997.

“I’m a ghost story fan and I love Halloween and I live in a scary, Victorian house,” says McKechney, a Lake Bluff resident. “I was on the History Museum board, and I went to York, Maine, with my children and saw this sign up for a ghost walk. We went on this walk, and they told random stories you might hear at a Girl Scout camp.”

McKechney says what she really wanted to know was more about the history of the town and ghost stories about real people. When she got back to Lake Bluff the idea for a local Ghost Walk took hold. 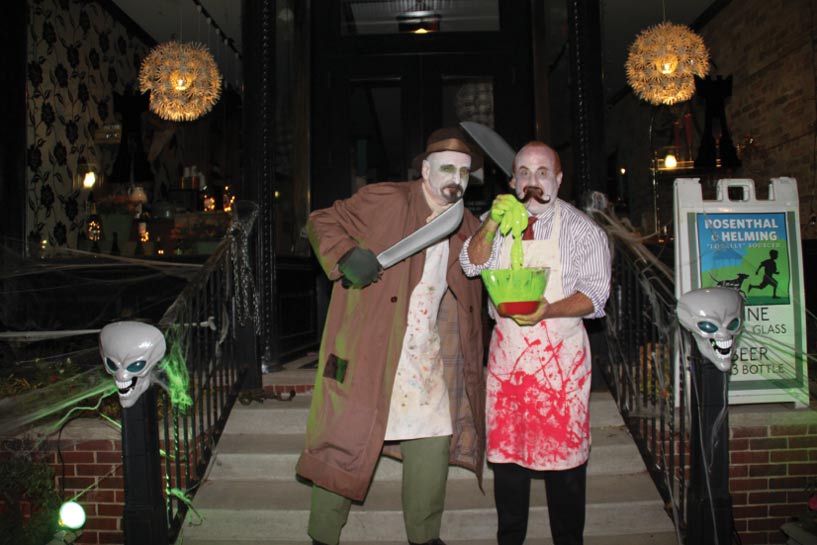 “I thought, ‘Why don’t we do a ghost walk but we will tell the real stories that happened in town. Some of them are very scary and I think people will be interested and they’ll learn history at the same time.’” In past years, the Ghost Walk has been based on a theme, including “The Twilight Zone” and “Alien Invasion”, and this year’s theme will be “Stranger Things” and the upside-down village that featured in one season.

“As you know, our world is pretty upside down these days, especially following the pandemic, and we just thought it would be interesting to do a parody of some of the pieces of that show,” McKechney says.

The walk starts at the Lake Bluff History Museum and then makes nine stops in different locations in town, including the Lake Bluff Library and local businesses.

“Our local businesses are always so generous. Oftentimes they just give us the keys to their building; it’s that kind of a community,” McKechney says. “They let us use their space for the weekend for the show.” 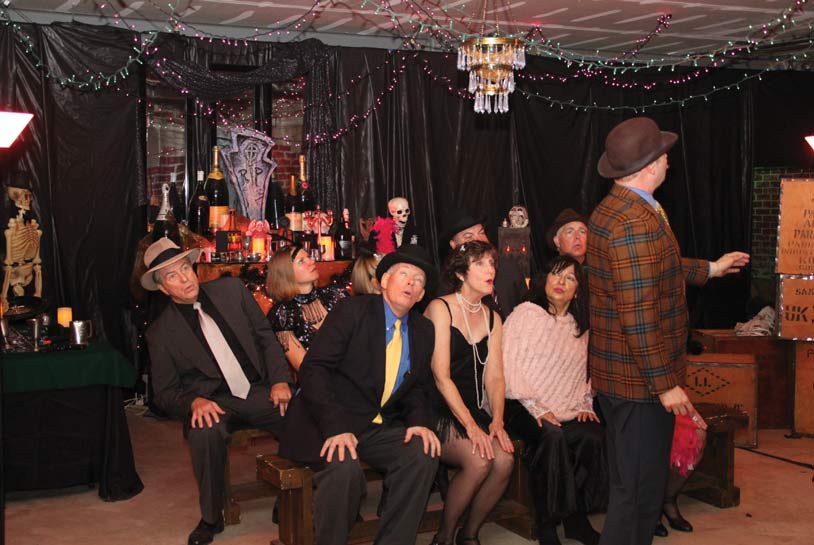 The cast from a speakeasy scene, including Walt Sloane as gangster Al Capone, does a Ghost Walk-themed rendition of “Sit down you’re rocking the boat” from Guys and Dolls.

And a show it is. Each stop on the walk includes a full-on production, sometimes a parody, of ghost stories that walkers may or may not be familiar with. Local talent participates in the production, including Regis Chalot, President of the Village of Lake Bluff.

“It’s more Saturday Night Live than real theatrical performance, just because we have to be very flexible,” she says. “We use some very good actors and non-actors and there’s a hundred of them and sometimes things change.”

Most of all, the event brings the community together.

“One of the things I love is that people will be in a scene together and they start off as strangers and after they’ve done this 13 times over two nights they become really good friends,” she says.

The Lake Bluff History Museum Ghost Walk will be held on October 21 and 22. Walks commence ever 15 minutes between 6 and 9 p.m., and tickets are $25. For more information or to purchase tickets, visit lakebluffhistory.org.