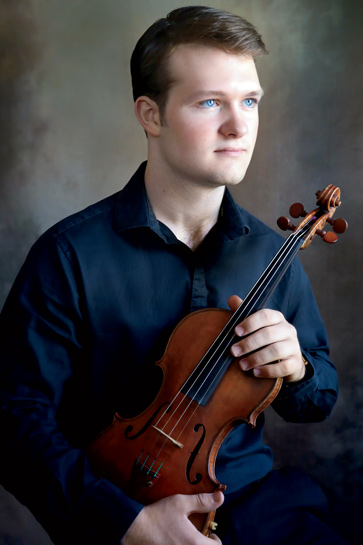 AIDAN WATTS, a rising junior at Lake Forest High School, already has 14 years under his belt playing the violin. Now 17, the math is pretty easy; he started playing the violin when he was 3. While Watts is currently a member of his high school’s symphony orchestra, he’s looking forward to his next gig.

Watts and a number of other area high school students have been selected to play as soloists for the Lake Forest Civic Orchestra’s (LFCO) upcoming 2022-2023 season, its 34th, which kicks off on October 9 at the Gorton Center’s John and Nancy Hughes Theater.

“I feel very honored to be offered the chance. It’s not every day that you have the opportunity to perform as a soloist with an orchestra and it’s an incredible experience,” Watts says. “These programs really benefit young musicians by giving them more ways to share their talent and passion for music with the community.”

Watts will be a featured soloist at the October 9 concert and will be playing “Vin Concerto No. 1, Mvt. 1,” by the German Romantic Composer Max Bruch, his most well-known work.

“I can definitely relate to the piece. On his gravestone, Bruch had carved, ‘Music is the language of God,’ and I think that’s just such a wonderful phrase,” says Watts. “Music is very powerful and no matter what language you speak, everyone can come and connect through music and that’s something I think is very special.”

On a more personal note, Watts says one of his private teachers, Charlie Pikler, wrote an addition to the first concerto the orchestra will perform on October 9. Watts says Pichler first wrote the piece for him and he initially played it on piano but this will be the first time the piece will be played with a full orchestra.

The reason the orchestra began involving student soloists in its performances was to boost community involvement. Having local students and up-and-coming soloists, Ramaekers says, is the best and most effective way to continue to represent the Lake Forest community.

While most of the players in the orchestra are volunteers (section leaders and some administrative staff are paid employees), it’s the music it produces and plays reflects its players’ collective passion for the works it undertakes, some audiences might not be familiar with.

“The first thing for me it’s a really great group of people and it’s great how everybody is really committed to this mission of representing and serving the Lake Forest community,” he adds. “Orchestras run the risk of becoming stale and easily falling into set patterns. What I really enjoy about working with LFCO is they’re willing to go with newer ideas.”

“For example, the first concert we have this year we’re performing a piece by Stacy Garrop called ‘Becoming Medusa’,” Ramaekers says. “Garrop lives in Evanston and for a long time was a professor in Roosevelt University’s Music Department.”

On the spring 2023 calendar is a performance of “D’un matin de Printemps” by Lili Boulanger, a French composer who died quite young in the early 20th Century. Ramaekers says her music isn’t played nearly as often as it should be, and alongside side it the orchestra is playing works from more well-known composers such as Tchaikovsky and Mozart.

Howard Martino grew up in Lake Forest and played a few concerts with orchestra in its early days but took an extended hiatus before joining up again about 12 years ago. He’s now President of the organization’s Board of Directors. Like others involved in the organization, it’s the community aspect of the orchestra that motivates him.

“I think it comes back to community and the need to give back to the community. Music in Lake Forest has done a lot for me and so it just made sense for me to come back,” Martino says. “Then, at some point we needed a change in direction with a music director and I kind of stepped up to the plate and started working on the board.”

While volunteers now pay a fee to participate in the orchestra, there’s a payoff—being able to learn from the professionals hired by the orchestra and enhance their musical skills.

“We hire section leaders who are pros to come in and help teach and drive the sections, at least the string sections,” he says. “The volunteer players get some benefit because they have the opportunity to become better even though they are talented already.”

Martino says he gets special satisfaction from the orchestra’s program to bring in guest high school soloists like Watts. The program is offering opportunities to students who were impacted by the shutdown during the pandemic and weren’t able to play with their high school orchestras.

“We look forward every year to providing rising musicians in the community the opportunity to play with us,” Martino says. “We Initially brought four of them in for one concert and I just remember not really being able to see my music because my eyes were tearing up seeing that they were finally able to feel that experience.”

Melinda Vajnic is a Principal Flautist with the Lake Forest Civic Orchestra, and she says she plays with the orchestra because of her love of making music and being able to participate at a community level.

“People join it for the love of making music and we are truly unique in the sense that we have received so much support from the community and from our members who play for the love of it,” she says. “Over the years we’ve created a space for people in this hectic world, whether you’re an orchestra member or an audience member, to come and find a space where you can escape for a little while into something deeper and beautiful.

“It’s a lovely thing and it’s not easy to make a community orchestra work, and these days we couldn’t do it without the community.”