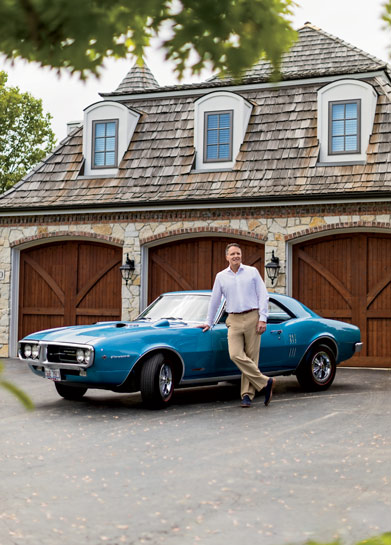 ROB ROURKE would spray perfume and deliver immediate compliments to his suddenly aromatic customers as a fragrance counter salesman in his college summer days along the East Coast. Rourke—now 54 years old, a Lake Forest resident since 2006, a father of three sons, and in his 26th year with L.E.K. Consulting—got paid to flash a blinding smile above his resplendent threads and make shoppers feel, and smell, like a million bucks.

Rourke, these days, regularly finds himself on the receiving end of compliments, thanks in part to his immaculate, head-yanking, bright-blue car, a 1967 Firebird/ Royal Bobcat, a vehicle he’d bought for $2,600 at the age of … 13.

It has been restored twice, the second time professionally, and it has rolled for 79,000-plus miles.

“I was returning to my car after shopping at Heinen’s Grocery Store in Lake Bluff one day, when I noticed a note on my Firebird’s windshield,” Rourke recalls. “It said, ‘This is the nicest old car I’ve ever seen. I would like to buy it. Please call me at this phone number when you are ready to sell it.’ ”

Rourke hasn’t called the scribbler yet.

Will never call the scribbler.

You don’t part ways with a 55-year-old asset that brings you joy, daily. Simple as that.

“Cars have always fascinated me, especially the design element of them,” Rourke says, adding his father, Lake Bluff resident and 80-year-old Norm, was a “car guy” in Rob’s youth and loaned his son $1,300 to help pay for the Firebird (Rob paid his father back in two years, with a smidge of interest).

“The look of a car, in the year it was introduced,” he continues, “often reflects the era. You can look at a car and get a pretty good feel for what was going on in society at the time. I love that connection, that history aspect. Cars change so much, don’t they? My Firebird was made right in the middle of the muscle car wars (1960s-early 1970s). It has a bigger engine than the one the manufacturer put in most of its cars in the ’60s. Its engine is tricked-up; it’s a drag racer, essentially.” 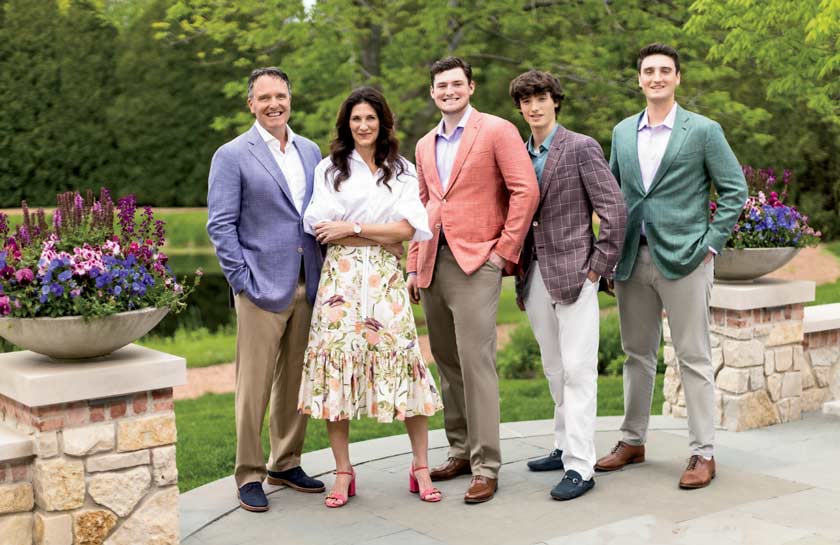 Rob Rourke along with his wife, Christina and three boys Andrew, William and Michael

Rourke, a year away from competing as a long jumper and 440-yard sprinter for Chelmsford (Massachusetts) High School’s track and field team, and his father were driving to visit Norm’s sister when they spotted a car for sale on the side of a road in New Hampshire.

They stopped, got out, and checked out every inch of the ’67 Firebird.

“It needed work,” says Rourke, who owns three other classic cars and has displayed his Firebird at “Then & Now” auto shows staged by the Lake Forest/Lake Bluff Chamber of Commerce. “But, right away, I thought it looked cool.

“I still think it looks cool.”

But Rourke’s love of vintage cars takes a back seat— make that, a trunk seat—to his love for his family. He met this future wife, Christina, on a blind date and proposed to her in a cave in Napa, California, after having arranged for an array of candles to soup-up the moment and for their guide to halt guiding and disappear for a while.

William attends Syracuse University, where Rob earned a degree in business and, during summers, “minored” in spritzing.

“I absolutely love spending time with my family,” Rourke says. “My wife keeps me on my toes and has been incredibly supportive of the demands of my career, and what excites me most about our kids is the variety of their interests.”

Michael achieved Eagle Scout status four years ago. He built a 60-foot bridge for walkers in Middlefork Farms in Lake Forest for his Eagle Scout project, because walking paths would get flooded every spring. Michael consulted contractors and other professionals before tackling the endeavor. Michael’s proudest, loudest cheerleader in Lake County? Rob Rourke, by a few country miles.

William focuses on athletics, has an interest in hunting, and, like his father back in the day, is entrepreneurial. (Rob, while growing up outside Boston, was a paperboy, an employee in a regional distribution office of The Boston Globe, a pizza man, and a floral delivery boy, before getting deployed behind that perfume counter).

Andrew is into academics and fitness. He also had a lot to do with triggering a family holiday tradition 10 years ago. Rob, an avid cook, made a bouillabaisse for the Rourkes on Christmas Eve in 2011. A five-year-old Andrew couldn’t consume enough of it and probably considered leaving a small bowl of it for Santa before changing his mind seconds later.

Since then, usually around the day after Thanksgiving, Andrew starts to look forward to inhaling the hearty stew on Christmas Eve.

Rob Rourke kicked off his consulting career with a position at Andersen Consulting in Hartford, Connecticut; he also worked for Andersen at its Boston office, before leaving the firm to complete the one-year program at Northwestern University’s Kellogg School of Management in 1996.

L.E.K. Consulting—an international consulting firm, which was founded in London in 1983 and opened its Chicago office in 1993, focuses primarily on growth strategy and mergers and acquisitions—hired Rourke as a consultant in 1996. He served as an L.E.K. manager in Chicago from 1998-2001, and has been a Partner since 2002. He is currently Vice Chairman of the firm’s Global Industrials Practice an previously served as the President of L.E.K.’s Americas Region.

“I get to work with unbelievably smart and talented people,” says a grateful Rourke, who, for 15 years, was a board member of the world-renowned social service organization Chicago Lighthouse. “Our firm’s culture is such a positive one, filled with highly capable, high-energy, down-to-earth people. My colleagues are never, ever satisfied, because they’re trying to do better, always. We’re devoted to better—that’s our mission. Our fantastic team wants to advance things.

“It’s rewarding to me, helping companies grow and compete. And it’s an honor to help companies achieve their ideal outcomes.”

Owning a ’67 Firebird is an honor, too. Honk your car horn, smile, and wave if you’re at a stoplight and you happen to see Rob Rourke behind the wheel of his beloved set of wheels.