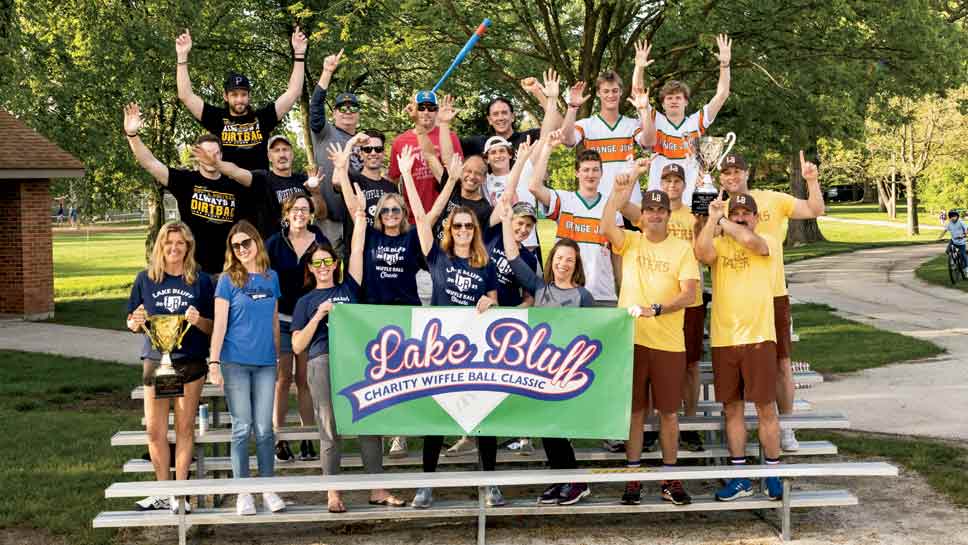 WIFFLE BALL PITCHES have defied physics, confounded and tantalized and frozen batters, and often elicited bouts of laughter from all but the bewildered one wielding a plastic bat at the time.

But there are three other components of the Lake Bluff Charity Wiffle Ball Classic that supersede the significance of unleashing perplexing pitches: philanthropy, community, and camaraderie.

All three will again be integral facets at the 10th Annual Classic on September 10. The top two teams in each of the men’s and women’s divisions last year split $24,000 and donated the portion (winners gave $8,000, runners-up $4,000) to the charity of their choice.

“The Wiffle Ball Classic embodies everything that is Lake Bluff—a grassroots event that grows year by year because folks keep talking about how fun and wonderful it is,” says Lake Bluff Village Administrator Drew Irvin, a regular participant of a happening that drew five teams in Year 1 and 29 teams and nearly 200 competitors last summer.

“Lake Bluff people are remarkable,” adds Irvin, village administrator since 2008. “They love having an excuse to get together for something that will support and build our community. They put their heart into events, especially one that shines a light on great causes like this one does, and it shows.”

McKendry and her Bluffers teammates topped Pitches Be Crazy in the Women’s Division final last year and then relayed $8,000 to House of Peace, which provides a secure, temporary residence for Latina women and children suffering from domestic violence.

“House of Peace was the only shelter of its kind to stay open during the pandemic,” says McKendry, who first heard about the Lake County shelter from LFHS Varsity Girls’ Tennis Coach Denise Murphy, whose netters often serve as volunteers there. “I called the shelter right after we won the championship game and told the woman who answered how much money they’d receive.

Another moving moment in the Classic’s history occurred because of a glitch in a sound system on September 11, 2021, the 20th anniversary of the 9-11 attacks. The national anthem was supposed to blare before the Classic’s first pitch.

But players and spectators heard … nothing.

Until an alert, fearless Tim Moore started to sing “The Star-Spangled Banner,” a cappella.

A few others joined in, followed by many others. Goosebumps surfaced.

“Such a heartwarming, amazing moment,” Leslie Leonardi recalls. “And so Lake Bluff. Anybody who experienced that would tell you, ‘That’s what Lake Bluff is all about.’ I loved how quickly everybody rallied and came together. People who live in Lake Bluff like to have fun and promote community.”

Jacopo Leonardi, who was born in Florence, Italy, grew up in Queens, New York, and had a blast each time he played Wiffle ball with friends. Reaching adulthood failed to abate his love for the variation of baseball featuring a perforated, plastic ball and a yellow, plastic bat.

Mr. Leonardi and co-founder Monk won the first three Lake Bluff Charity Wiffle Ball Classic men’s titles as members of the team 3 Paisans and a Monk. Boys (sixth-grade and older) later formed teams and became tourney darlings, none more so than the Texas Y’Alls, a squad comprised of Lake Bluff Youth Baseball Association players that made its Classic debut in 2019 and paved the way for more boys teams by stealing the hearts of the crowd.

The Texas Y’Alls made it all the way to the men’s final last summer, shortly after returning from their trip to Cooperstown.

“Usually at least one player on a team has a connection, in one way or another, to the organization that the team had designated as the charity it would assist with a top-two finish,” says Leslie Leonardi, who no longer competes in the tournament but plays a vital role in organizing the Classic each year.

The fee for each team (five to eight players) this summer is $550, with registration opening on August 10 and ending on September 8. A free lunch—catered by Puck’s Pub—and T-shirt will be provided for each player. All teams will play at least four games. Teams consisting of players from other towns are allowed to register; Lake Forest residents have battled in Classics, as has a team (Dirtbags) from Libertyville that fielded four brothers who double as nephews of Leslie and Jacopo.

“We see other communities taking what we’ve done and producing their own charitable tournament,” says Leslie, who grew up in Barrington and attended Knox College in Galesburg. “I’d love to help facilitate that if anyone is interested. We are happy to pass on whatever knowledge and assistance we can to get that started.

“Organizing this can be challenging, a bit like wrangling cats, but I love putting it together,” she adds. “There’s no way I could do this alone.”

So is the Lake Bluff Charity Wiffle Ball Classic.

“There’s nothing like the vibe of that day at Artesian Park,” says McKendry, who graduated from Carmel Catholic High School in Mundelein and played a slew of sports while growing up in Waukegan. “After I first played Wiffle ball there, I recruited many of my softball teammates to join me. They loved it right away and loved it even more when they realized success would result in a donation to our chosen charity.

“I remember thinking, as I looked around during a game one year, ‘This is so Lake Bluffy.’ It ranks right up there with Lake Bluff ’s other fun happenings, like our block parties and parades.”

Adds Drew Irvin: “Hats off to Jac and Leslie for what they do to make this the special event it is each year. People, every year, walk by the park, discover all these Wiffle games being played simultaneously and ask, ‘What’s going on here?’ Then they say, ‘This is awesome!’ and sign up to play the next year.

“We’re a small town, with a Village Board that finds a way to get behind any event that’s fun and strengthens our community at the same time. There’s no question that our annual Charity Wiffle Ball Classic is a shining example of such an event.”

More information about the 10th Annual Lake Bluff Charity Wiffle Classic can be found on Facebook and on Instagram: @lbwiffleball.