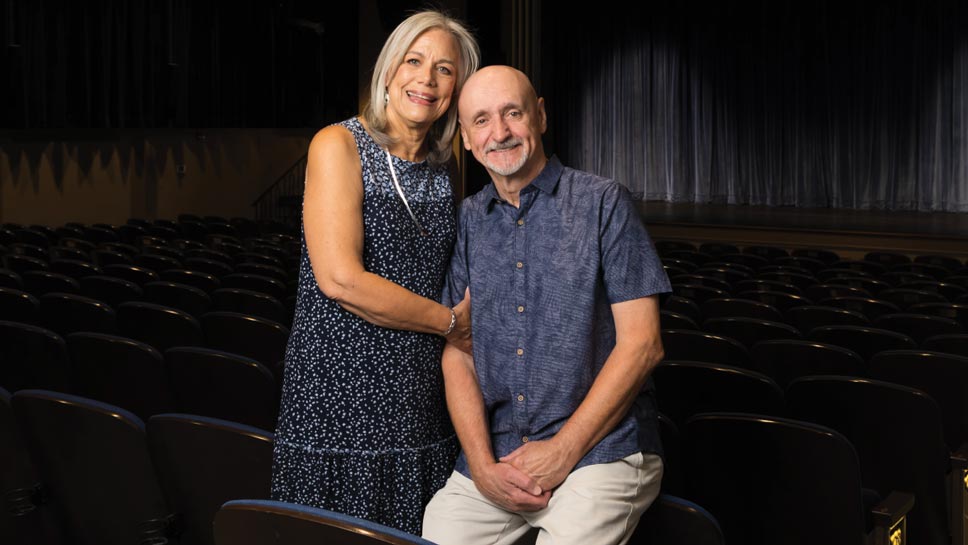 IF YOU’RE A LOCAL who has had a child in the last 20 years, you’ve likely been lucky enough to cross paths with Tom and Susie Beck, the duo behind a childhood favorite—PASTA— the Performing Arts Summer Theatre Academy at Gorton Community Center. PASTA has evolved over time to offer programming year-round and has become a favorite among the t’ween and teen set who’ve dreamed about being on stage. This summer, at the close of PASTA’s final performance of Alice in Wonderland on Sunday, July 10, the Becks will officially retire.

“It’s time,” says Tom in his quiet way, a tone that has been undoubtedly shaped by his decades of working with children, having gotten his start at Lake Bluff Elementary School. “We love this program and working with the kids, but it’s time for a new adventure.”

The Becks established themselves as an extracurricular juggernaut for parents. Typically, after a child had a taste of being in a Beck production, they returned season after season for a chance to perform. The Becks made Jungle Book, Joseph and the Amazing Technicolor Dream Coat, Wizard of Oz, Lion King, Seussical, and many, many other shows classics among the young theater set.

“We often remember the kids by the characters they played,” Tom says. “Auditioning is so personal and I admire the kids who try out for specific roles. You don’t audition without hopes of getting something you want.”

Such care goes into each performance, from casting, to set creation, to costuming, to choreography, and to overseeing the interns who are always graduates of the PASTA program. All of this was done by the Becks.

“Tom and I talk a lot, a lot about each show,” Susie says. “There’s very little stress unless I tell him how to build a set or he tells me how to make a costume. I have this ability to see an entire show in a line, where Tom sees it in little pieces. We really work very well together.”

Tom adds that the two of them are best at casting the show. “We absolutely do this together,” he says. “We each make a list of who we should think should have each part, we compare notes, and then we sleep on it. Sometimes, Susie will get up in the middle of the night to make some changes, but we always agree on who is doing what before we tell the kids. It just works.”

Over the years, PASTA has taught many life lessons in addition to theater skills. One summer, there was a computer glitch and when PASTA reached its maximum number of students, it failed to shut off.

“We ended up with 62 kids that summer for the Wizard of Oz,” Tom says, explaining 40 students is usually the sweet spot for the number of campers. “On the first day of camp, I asked for a show of hands how many kids wanted to be Dorothy. Every girl and a handful of smart-aleck boys—who I got along with very well by the way—raised their hands. That’s when we had to have the talk that not everyone can be Dorothy and there’s a lot that goes into choosing the right person for the right show. We always want the kids to understand what goes into making that decision.”

The Becks begin planning for their programs a year in advance. And last year, after navigating PASTA through Covid protocols, they knew that this year would be their last.

“I started going through our storage locker last summer knowing that we would never be doing certain shows again,” says Susie. Susie, a retired art teacher from the Glenbrook School system, is looking forward to getting back in the classroom as a student.

As for Tom, he is hoping to find himself doing more theater himself, as well as coaching future thespians. And both are looking forward to pursuing some of these dreams from a new home they purchased in Arizona.

The Becks will close out their time at Gorton in the same way it began—with the musical production of Alice in Wonderland. They hope many of their alums will pack the house.

“This is an exciting time as PASTA retires with us,” Tom says. “But we know this program will be back in some form, some day. Susie and I look forward to being in the audience.”

The Gorton Drama Studio is currently offering camps and classes in acting at Gorton. To learn more, sign up for remaining spots in PASTA, or purchase tickets to PASTA’s final shows, visit gortoncenter.org.