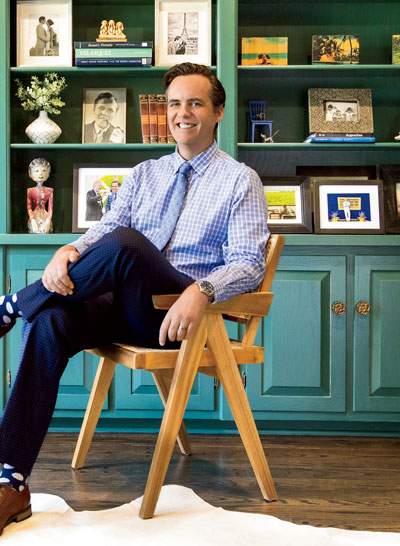 WHEN DREW NAISMITH was a young boy growing up in San Diego his parents, immigrants from Scotland via Canada, separated. Not raised with a strong father figure, he found one decades later in Lake Forest. It’s an unlikely Father’s Day tale with a love story at its center.

While Naismith’s father lived near the ocean, his mother moved to the eastern part of San Diego, and he attended Helix High School during the years football stars Reggie Bush and Alex Smith were running amok on the field. After graduating, Naismith attended the University of San Diego where he studied business administration. Just after his professional career began, a chance meeting in a nightclub would set the course of his life.

“I was in the technology field working in San Diego when I met my wife, Johanna,” Naismith says. “When I became more of a staple in her life, I started chatting away with her father—just talking about business opportunities, hopes and dreams, and everything else.”

Johanna, born in Switzerland, is also a child of immigrants. Her mother is Colombian and father, Jan Jorfald, is originally from Norway. In 1981, the family immigrated to the U.S., eventually settling in Lake Forest. Soon after, Jorfald founded an HVC company that would turn out to be highly successful.

Jorfald was a civil engineer by trade but developed highly engineered machinery specific for the filtration industry. There was a demand for high-volume production parts which he met utilizing his own equipment. As he was getting older, Jorfald began discussing the future of the company with Naismith and the possibility of Naismith joining him. Jorfald wanted Naismith to be involved in a new venture the company had launched manufacturing and selling spiral filter cores.

The only problem? The Naismiths were still living in California.

“He said, ‘Look, I’ve been there done that, and it could be something great for you, but you have to be here in Illinois’,” says Naismith. “So, I talked to my wife and oddly enough she wasn’t the one who wanted to move back. It was more me who wanted to explore this opportunity to basically start up a new business and have free reign and run with it.” 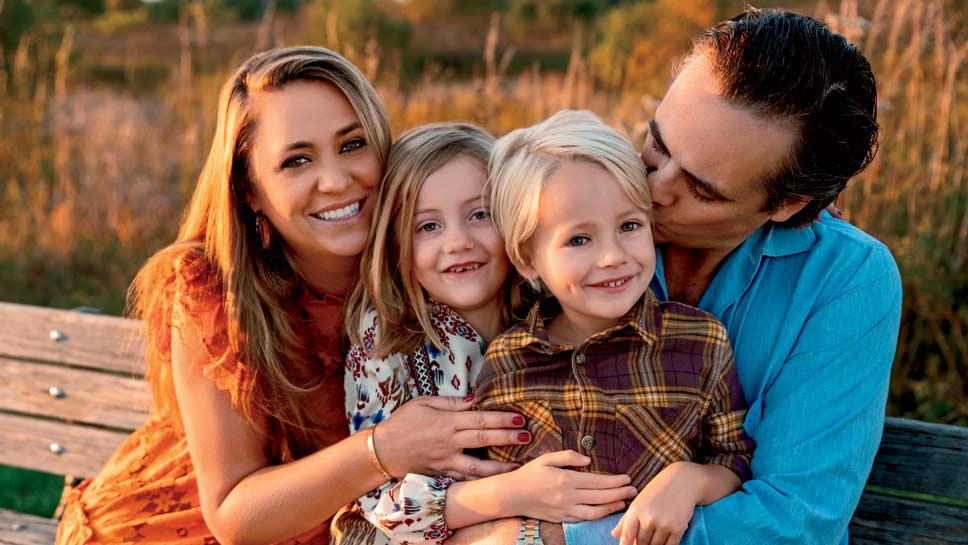 After moving to Lake Forest, where Joanna was raised, Naismith went to work for his father-in-law and over some years, the two developed a tight professional and personal relationship. The couple traveled together, exhibiting at trade shows, and Naismith says his wife had to endure family dinners during which he and his father talked business.

“It’s hard especially nowadays to find a business professional who you can get such close mentorship. I had him to myself in a business setting for ten years uninterrupted,” Naismith says of his father-in-law. “Whenever you go into business with family, you don’t always get the best of outcomes, but he and I had lunch every day in the office together. There’s no question I felt like a son.

“He was a real father for me. He took me in. My wife has two younger sisters, so I guess I’m the son they never had. He lost his father at a young age, so he didn’t really have a father figure either. Professionally, he was able to bestow his many years of knowledge and mistakes, because you learn more from a mistake than you do a success.”

When Jorfald passed away suddenly four years ago, this transfer of knowledge was instrumental in his ability to continue his father’s legacy as CEO of Helix International. The decade of watching and learning from his father-in-law paid off.

“When he unexpectedly passed away, he had already taught me to take over the whole business, which I’ve been doing the last four years,” Naismith says. “Fortunately, I was there, and the years of training had prepared me to just step in easily.”

Johanna Naismith says that Drew’s tenacity and enthusiasm for her father’s business was an important part of what was then an unplanned, but ultimately successful, transition.

“The company was my dad’s baby. He poured his blood, sweat, and tears into it, and I had never met a harder worker than my dad until I met Drew. I also have never met anyone other than my dad and Drew who could get so excited talking about tubes and filters,” she says. “The plan wasn’t supposed to fall like this. With my father’s unexpected and tragic death, we had no idea what was going to happen to the company.

“But that next day, without any pause or hesitation, Drew did what he knew he needed to do. He took my dad’s legacy, his pride and joy, and wrapped his arms around every single part of it and made a commitment to himself, to me, to my family, and most importantly to my dad, to move forward and keep it successful.”

The Naismiths now have two children of their own, daughter Olivia, 8, and son Luka, 4. There are lessons from his father-in-law and others he’s learned along the way that he tries to convey to his kids.

“Being in the position that I am, the president of a corporation with 40-plus people working or reporting to me directly, first and foremost you need a treat people with respect,” he says. “It goes back to the old saying to treat people how you want to be treated.”

Naismith says education is also a must, and while it comes in different forms, it’s essential for success. The learning doesn’t just happen in the classroom.

“Be a well-cultured individual. We’re in a very fortunate position and you have to go see other people, places, and things,” he says. “It’s important to convey that to your kids and make sure, as they’re growing up, they understand those different dynamics.”

While the move to Lake Forest from sunny San Diego has worked out for him professionally, Naismith says he also sees the community as a great place to raise a family.

“I grew up surfing and playing water polo and doing all these activities outside. Growing Up in Southern California, pretty much every day of the year you can go outside and pick your poison,” he says. “But the Midwest is a good place for raise a family, and this community is nice and strong. The schools are awesome, and Chicago is big city that has everything one would want.”

Despite the challenges that being a corporate CEO brings to maintaining a work/life balance, Naismith remains deeply involved in his children’s lives, from attending his son’s soccer games to showing them the world.

“We travel a lot and my wife and I decided that what we want to bring our kids with us. We were just in Central America, and before that we were over in Europe,” Naismith says. “We want them to be well, educated and cultural individuals, not only cultural with what’s going on here in the U.S. but overseas as well.”