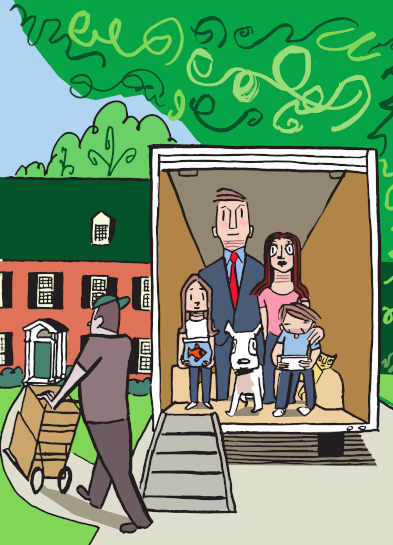 IF YOU LIKE TO BE reminded of your spouse’s each and every shortcoming, if you enjoy overwhelming served with a side of worry, exhaustion, and self-loathing, then listing your house and moving might be for you.

We sold our home this spring. We’ve moved a lot. I have blessed and released enough homes to know that a house is like a petulant child.

I’m no shrinking violet. I am a strong contender in the House v. Homeowner arena. We have had groundhogs living between the walls of our bedroom. We have survived turf wars against bands of brazen and resourceful raccoons. We had a colony of displaced rats move into our cellar during a garbage strike when our city’s Victorian sewer system was being replaced. The rats were drunk with power that summer, climbing walls, terrorizing people, and taunting dogs. We’ve had nesting seagulls so vicious they made grown men cry. We’ve had frogs in the basement. We watched rainwater cascade elegantly down our two-hundred-fifty-year-old staircase like a majestic waterfall. We’ve sorted out ice damming, water on wood floors, mold, and sewage in the basement (twice). But we have never experienced a Portal To Hell.

In a crisis, the first thing I like to do is misdirect my anger, fear, and panic onto my poor, helpless family. Then I cry. Then I binge sugar. Sugar gets me all hopped up and hyper-focused; I adore a false feeling of control. The real benefit of the sugar high comes hours later when my blood sugar crashes. Shaking and feeling weak while also being consumed with self-loathing, helps to distract me from the pain of emergency repair costs.

I’m not exaggerating when I tell you we had no idea who to call for help with the Portal To Hell. A plumber? A priest? In the end, heroes appeared in a snowstorm like apparitions. Equipped with an uber-specialized, Ghost Busters– looking truck, ice picks, and a McDonald’s cup, they closed the Portal To Hell. I invited them to Thanksgiving. They are like sons to me now.

When we moved to The Bubble, we were told people often end up buying three houses in this community: a starter home, a family home, and an empty nester home. We are now on our third home here. The thing about living between the bluffs is that once you’ve lived here, where do you move? We are supremely spoiled by the lake, our beaches, great schools, tight-knit neighborhoods, shopping, and restaurants. If an invasive beetle hitches a ride in a banana crate and decimates trees, our towns are prepared to plant hardy new trees to replace the old. If a storm swallows up part of the beach, our towns rally. Where else do you find people courteous enough to pick up after their dogs, yet preposterous enough to scatter the bags along the sidewalk?

We are still not in our forever home. I was cursed with both a gypsy soul and a penchant for fixer-uppers so I’ve probably got a few more moves in me. My forever home will likely be a plastic takeaway container on a shelf of the offspring unlucky enough to draw the short straw. In the meantime, we will live happily ever after here in The Bubble. There is no place I’d rather be than between the bluffs when spring gives way to summer.

T-Ann Pierce is a regular F&B contributor and confidence coach. We would love hearing from you. To be in touch, drop her a line at [email protected]