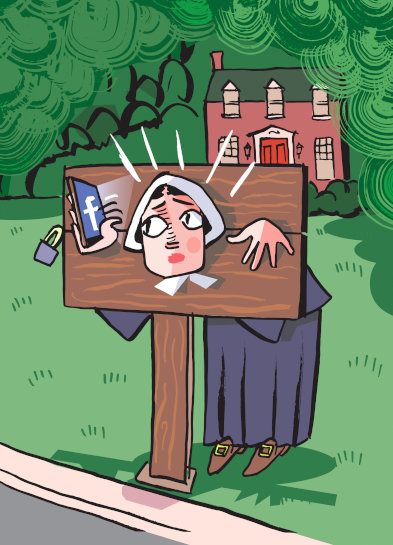 A YEAR AGO, my son did something dumb. In public. A rightfully concerned mom posted about The Dumb Thing on Facebook.

My son is the youngest of four. He is not my first rodeo. It is my experience that the brain of a second-semester high school senior resembles a Chia Pet more than an actual human brain. Apply a mixture of warm weather, sunshine, and a fast-approaching graduation date to a teenager’s Chia Pet brain and you’ve created ideal growing conditions for Dumb Ideas. In a flash, 10,000 Dumb Ideas can sprout in a high schooler’s Chia Pet brain.

The offender described in the Facebook post did not fit my son’s description, but The Dumb Thing had the hallmarks of my son’s personal brand of dumb: loud, boisterous, social. I asked him if he was involved. Of course, he was. We talked about why The Dumb Thing was dumb. No one was hurt. Nothing was damaged. But it was dumb. He owned his actions. Consequences were dealt. The Dumb Thing was handled. We moved on.

The Dumb Thing triggered comments and opinions that splintered like a broken windshield. By early evening, you would have thought the end of civilization was nigh. I poured a glass of wine, read comments, chomped on popcorn, and exchanged phone calls with friends who squealed as more and more scathing judgments poured in. Eventually, the admin of the page turned off commenting. Everyone had seemingly different opinions, but most people agreed on three things: 1. The mother of the boy must be one of those checked-out, permissive, manner-loathing types. 2. Entitlement causes people to vote for the wrong political candidate. And 3. Parents should skillfully extract free will from their child’s innards to ensure kids never make the occasional poor choice. Poor choices lead to (gasp) public embarrassment.

All I could think was, ‘Wow. Y’all would vote me out of The Bubble if you knew what I got up to my second-semester senior year.’ I had a strong moral compass and still, my Chia Pet brain had me running around committing all variety of Dumb Things. A bunch of us were televised on WGN sipping adult beverages in the bleachers of Wrigley Field when we should have been in math class. Our principal did not ridicule my mother. He did not fear for our country’s future. He simply warmed up our seats in detention.

I know very successful people who did Dumb Things. Like, staggeringly Dumb Things. Your investment banker did Dumb Things. So did your CEO neighbor. Your surgeon did, too. I know this because I was probably with them when they did Dumb Things and/or they are human. Either way, sometimes life’s most powerful lessons are learned from doing and paying the price for Dumb Things.

Another mom was recently dragged across the unforgiving virtual terrain of Facebook. Her son did A Dumb Thing. Were we all absent that day in kindergarten when the teacher taught empathy? Did we sleep through the sermon on compassion? Are we so desperate to appear perfect we can’t admit that parenting often-annoying, mini-versions of our imperfect selves is sometimes the hardest, loneliest, and most soul-crushing work we will ever know? Surely shaming one another can’t be the answer to the conundrum of being human, can it? We are all doing the best we can. So are our goofy, Chia Pet-brained kids.

Keyboard cruelty is A Dumb Thing; kindness is cool. Our community shines when we ditch perfection and pull together. So do our kids.

To be in touch, or to confess your cringeworthy Dumb Thing, check out T-Ann’s websites: t-annpierce.com and theconfidencetriangle.com. She’s on Insta @tannpiercecoaching and @the.confidence.triangle. Or stop by her office in Flotstone, Lake Bluff.