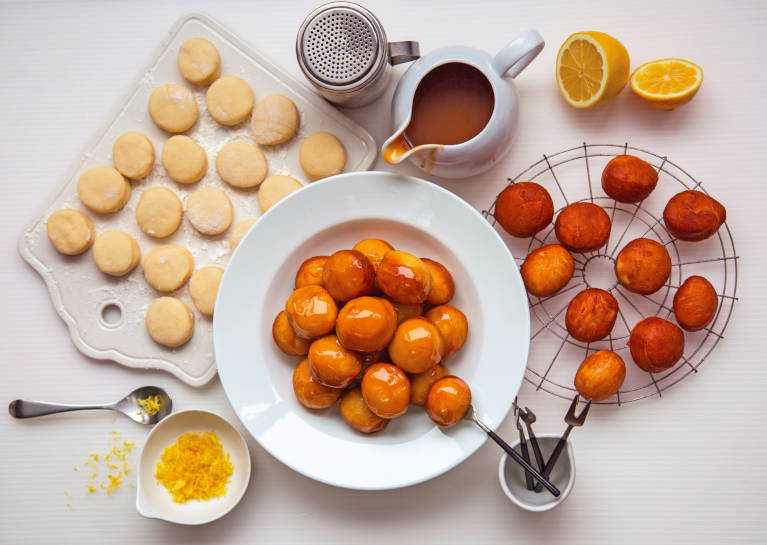 SAY, “HELLO,” to our spudnuts! These little potato-donut morsels are descendants of the German fastnacht fritter. Putting mashed potatoes in doughnut batter may sound weird, but potatoes add moisture to the dough, yielding a soft and tender donut that doesn’t taste potato-ey at all. Salt Lake City entrepreneur Bob Pelton learned about potato donuts while a Navy cook in 1930s Europe. When back in the U.S., he dubbed his version of the lightly sweet treat “spudnuts,”and sold the heck out of them through his Spudnut Shop stores well into the ‘60s. Eventually eclipsed by Dunkin Donuts and other brands, Pelton’s potato-donut empire is no more.

But spudnuts live on! While you can fry them in the traditional donut shape, we like doing them as doughnut holes–1 ó-inch rounds that puff into perfect little balls in the fryer. Shake them in a bag with cinnamon sugar, or doll them up with our salted-caramel glaze, or lemon curd filling. This recipe yields more than four dozen, so you’ll have plenty to share.

For the salted caramel:

For the lemon version:

Sprinkle yeast over tepid warm water to bloom. Set aside. In the bowl of a stand mixer with the paddle attachment, cream sugars with shortening. Beat in room-temperature mashed potatoes. Lower mixer speed and add eggs one at a time. Then the tepid scalded milk, bloomed yeast, water, salt and lemon zest.

Add flour, 1 cup at a time, mixing after each addition. Once you have added six cups of the flour, remove mixer bowl and turn the dough out onto a heavily floured work surface. Knead and fold dough, sprinkling on more flour as you go until the dough is soft, smooth and doesn’t stick to the work surface.

Place dough in a greased bowl; cover and let rise in a warm place until doubled in bulk; about 40 minutes.

Line several sheet pans with parchment paper. Cut off a chunk of dough and roll or pat out to 1/2-inch thickness. Carefully cut spudnuts with a well-floured 1 1/2-inch cutter, pushing straight down and avoiding twisting the cutter (this will give the finished spudnuts a more perfect shape.) Place on the parchment-lined sheet pan. Repeat until you have cut all the spudnuts.

Heat oil to 370* F in deep fat fryer. Fry spudnuts six at a time, taking care not to overcrowd the fryer basket. Flip spudnuts over half-way through frying, to evenly brown. Drain on paper towels.

To serve salted caramel version: Place caramel in a dipping bowl and serve alongside spudnuts for dipping, or mound spudnuts on a serving plate and pour caramel over.

To serve lemon version: Fill a pastry bag fitted with metal tip with lemon curd. Poke tip into the side of each spudnut and fill with a bit of lemon curd. Roll filled spudnuts in sugar you have mixed with lemon zest.