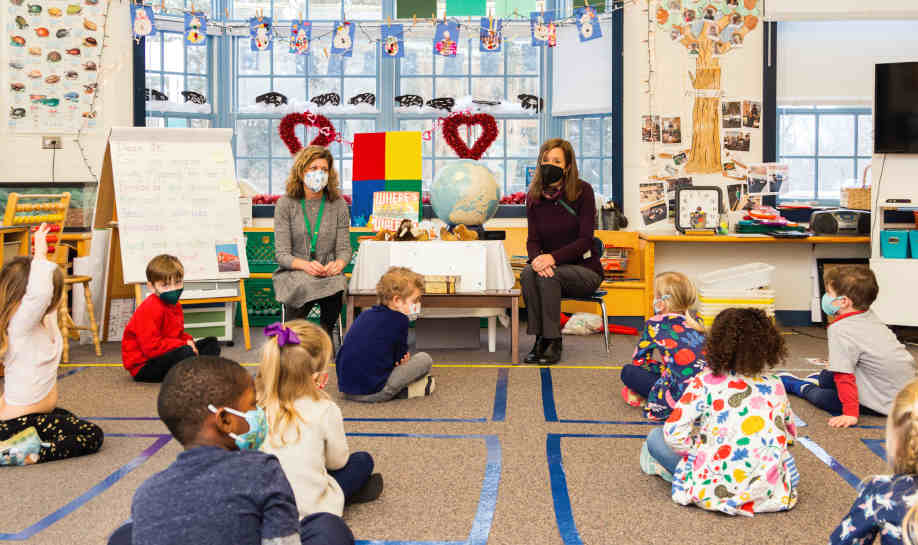 Over the last two decades, studies have shown that kids who receive a Pre-K education have a leg up when they move along in their education experience. The programs also show a benefit to society, as kids aren’t just learning but becoming socialized and understanding how to interact in the larger world.

Since 1888, Lake Forest Country Day School (LFCDS) has been providing educational opportunities for children in an Idyllic setting on the North Shore, including a robust Early Childhood Center where children ages 2 to 5 get an early start. A diverse, experienced staff takes children under their wings and works closely in partnership with parents to give them the best childhood learning experience.

“Marlo (LaCorte) and I have been teaching here a while, I’m on my 23rd year. I have two children that have gone through our school,” says Jennifer Farrell, a Junior Kindergarten Teacher at LFCDS, whose children are now in high school and college. “I have to say that every day when we would come to school, I felt very fortunate I could go to work, and all be under the same roof.”

The thing that struck Farrell while her kids were at the school was the sense of community that was at its foundation, and the relationship with parents and with other faculty that made a positive impact on students. This community aspect continues to this day.

“My kids feel the same way, that they graduated from the Day School as a place that knows who they are and knows them by name,” Farrell says. “That was a big deal, especially when they transferred over to the high school, and they were one of many. But to come from the Day School, that helped them with life-skills they needed to succeed.”

Farrell says when her son was in high school, he was assigned to write an essay and described LFCDS as a second home. The idea runs counter to the stereotype of parents having to be pry kids out of bed to convince them to go to school.

“That’s where the idea of the family school comes from,” says LaCorte, also a Junior Kindergarten Teacher at LFCDS. “It really does feel like a family school in that we are so partnered with the families of the children that we teach.”

LaCorte says it has been more difficult the past few years to connect with families because of restriction due to the pandemic, but partnerships remain strong. She started at LFCDS when her children were a little older, so they did not attend the Early Childhood program at LFCDS, which gives her a unique perspective on what the school offers.

“This is my eleventh year, and my kids were already enmeshed in their schools. They went to public school and, don’t get me wrong, they had a great education, but there was not that same sense of community and partnership,” she says. “Once they hit middle school, even more so in high school, I barely knew their teachers.”

Farrell says that while LFCDS does go up to eighth grade, there’s a commitment to knowing each child and to keeping class sizes small.

“We all really do care about each other, and I know it sounds cliché, but it really is the truth,” Farrell says. “This faculty is second-to-none; inspired teachers who are also compassionate human beings.”