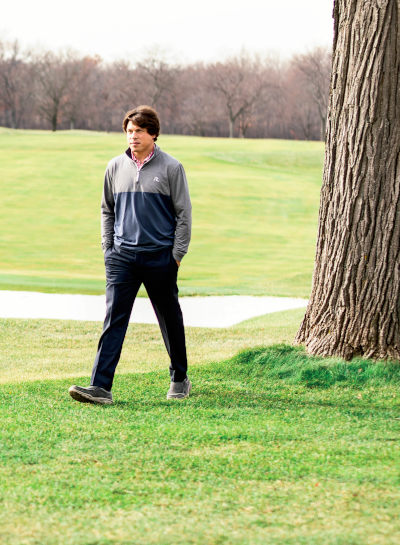 Andrew Vitt was 12 and golfing by himself when he carded his first hole-in-one at Exmoor Country Club in Highland Park.

“I was celebrating near the tee box, all while hoping, at the same time, that someone had seen my ball go in,” Vitt, a Kenilworth native, recalls. “As I walked toward the green, I looked around me. Maybe a greenskeeper had witnessed it.”

None had, alas. A hole-in-one isn’t official unless another set of eyes views it. Oh, well. At least Vitt didn’t have to buy a round of juice boxes for junior golfers at the club.

Vitt, now 39 and a Lake Forest resident, has tasted the thrill of striking four other holes-in-one—each of the official variety—since then, the latest having occurred at Exmoor’s No. 5 in April 2021.

“I got the itch to play golf competitively again about five years after college,” says Vitt, who played at Yale after helping a trio of New Trier High School golf squads (1998-2000) finish runner-up at the Class AA state tournament in his sophomore, junior and senior seasons. “I remember thinking, ‘I need to get better,’ so I put in the time.”

But don’t call Vitt a “Weekend Warrior.” He zoomed past that so-so-athlete status right around the time he won his first Exmoor club championship in 2016. Since then? The St. Andrews Capital Group managing partner and father of two—Mackenzie, 8, and Michael, 6, with wife Mary—has successfully defended his championship five times in a row.

Call him an “Annual Ace.”

The Exmoor record for total club championships won by a male is seven, a mark held by two others.

“You always feel, after every round of golf, that you could’ve shot better than you did that day,” Vitt says. “Maybe a shot better, sometimes two shots better. If I play poorly, I think, ‘There’s always that next round.’ If you have a special round, you think, ‘Why can’t I do that every time?’

“Golf,” he adds, “is a game for optimists. I see a carrot in front of me each time I play. It’s tempting you to catch it. You’re always chasing. It’s what I love about golf, the chasing, the constant aiming to reach a goal that’s right in front of you.” 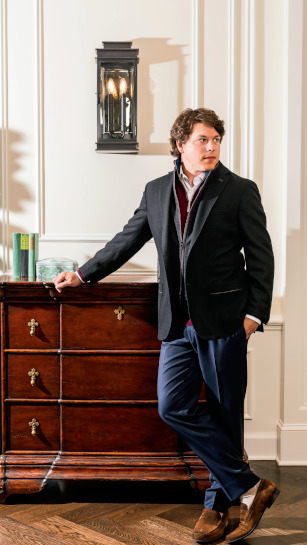 Vitt, who usually tames a course with his steady iron play, didn’t have to look far to find a major golf mentor. His godfather, Joel Hirsch—now an 80-year-old who splits time in Highland Park and in Florida—won a pair of British Senior Amateur championships and was inducted into the Illinois Golf Hall of Fame in 1999.

Hirsh still shoots near par and plays 345 rounds of golf, give or take a few, per year.

“He’s competitive to the core,” Vitt says. “Phenomenal putter. What I learned from him is that you should never give up when you’re competing. His favorite reminder to me was, ‘The ball doesn’t remember what happened on the last shot, so why should we worry about it?’ ”

Vitt still plays competitive hockey, too. A three-time state champion on New Trier Green teams as a winger, he slaps shots mostly as a center these days, either for his Northbrook-based team, Blue Bombers, or in pickup games at the rink at Winter Club of Lake Forest.

“Skaters here are competitive but clean, and talented,” Vitt says. “I love it, though I’m not nearly as fast as I used to be, and my shot isn’t all that accurate anymore. But I have a knack for getting to open spaces for opportunities to score.

“What I love most about hockey is getting to play with my buddies. I was thinking I might retire at age 40, but then again, who knows? Some guys I’m skating against are older than 50.”

The son of John, another golfer, and Sue, Vitt worked for the proprietary firm Darwin Capital from 2006-2018 after his Yale years and met his future wife while playing bags in Wrigleyville one day. Their first date was dinner at Rosebud Steakhouse in the city.

“It took me the longest time to get her phone number,” Vitt says of Mary, a sales manager for Chicago-based Schindler Elevators & Escalators. “But I got it, we dated, and my marriage proposal was low-key—we were on a couch, watching TV, probably a Seinfeld rerun. She’s lovingly honest, hardworking, and a fantastic mother.”

Vitt, meanwhile, enjoys fatherhood—“I get to take my son, who’s gone from tee-ball to underhand pitch, to baseball games,” he says—life as a Lake Forest denizen, and his workdays for St. Andrews Capital Group.

“Trading is a lot like golf … a different challenge every day,” he says. “Win or lose, whatever happens in golf or at work, it’s on you, and only you. Some people like to blame exterior factors for tough days at work or on a golf course, but I’d rather not waste the energy on excuses. There’s a scoreboard at work and another one in golf, tallies that can be improved with better preparation and execution.

“I like that, because I’m always striving to improve on and off the course.”