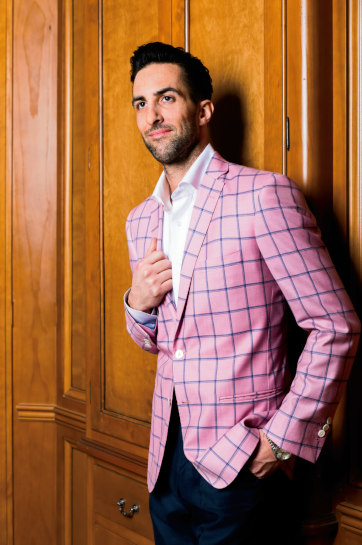 IT HAS NEVER BEEN difficult for former record-setting Deer Path Middle School wrestler Brian Dacy to pin down exactly what’s allimportant to him.

Or as a sibling.

Or as a husband and a father.

Or even as the co-founder/CEO of Life Tech, a leading provider of high-tech home respiratory equipment and services. Life Tech’s mission is to offer exceptional service to help patients—in Illinois, Indiana, Missouri, and Wisconsin—improve daily living and maintain independence in the home or community setting.

What sets Life Tech apart from other Home Medical Equipment (HME) providers is its focus on pediatric patients who are technology-dependent and require the most complex respiratory care.

“We were interested in the pediatric space from the beginning, in part because not a lot of companies in our field put much emphasis on infants and children who need specialized care at home,” says the 40-year-old Dacy, a Lake Forest native who, with his wife, Tecumseh, Michigan, native Ali, and their children (Jack, 13; Bridget, 11; and Parker, 9) returned to his hometown eight years ago. “We help the hospital system. We help children return home from the hospital—and keep them at home.

“But we do more than see to it that the child is taken care of at home. We truly care about that child’s family, too; at a home environment, with a medically fragile child, every one under that roof is affected.”

Family-first, grappling great Dacy, who had amassed the most career wrestling wins in school history when he graduated from DPMS, launched Life Tech in 2009 with his late father, Tim Dacy, a highly successful careerist in the healthcare industry, beginning with his stint at Medline, and a standout football player at Highland Park High School, Arizona State University, and Northern Illinois University, where he served as a Huskies captain.

“He was my mentor, my early coach, a larger-than-life guy, a tremendous athlete, and the primary reason I entered healthcare,” Dacy says, adding his father started an enteral tube feeding company in the 1980s and was the heart behind local hospices and pharmacies and the creative force behind a venture that produced high-tech wheelchairs.

“People in Highland Park, even today, after hearing my last name, still perk up and tell me how great of an athlete he was, how great of a person he was. You should have seen him, heard him, as he interacted with others. Everybody who knew my father also loved him.”

Everybody who knew Tim Dacy also watched, in awe, as he unflinchingly took on a progressive nervous system disease for more than 10 years.

“Fortunately or unfortunately, depending on how you look at it,” Dacy says, “my father was also a Life Tech patient.”

“Not once did my father complain after his diagnosis,” Dacy says. “To not be able to move, while barely being able to talk, at the end of his life, I would have been angry or upset every day. Not my father. My kids and those around him recognized how well he handled the debilitating illness. It was an amazing life lesson he taught all of us—live life to the fullest, every day, no matter your condition. Stay positive and cherish every day.”

Life Tech was awarded a Quality Respiratory Care Recognition Seal from the American Association for Respiratory Care (AARC), and, in 2015 and 2021, was presented with the HME Excellence Award and recognized as one of the top three HME providers in the country.

“Our 80-plus, hardworking staff members consider themselves extensions of the families they serve,” says Dacy, who insists he’d be nowhere near as successful at Life Tech as he has been without the devotion of Ali, “an amazing wife and mother who does everything to ensure the well-being of our family.”

Not one family has left Life Tech.

“We strive to do the right thing for all our families,” Dacy says. “If something needs to be addressed in a home, we’ll make it right and do whatever we can to resolve whatever it is that needs attention.”

Dacy’s goal, all along, was to call Lake Forest home again after attending Western Michigan University, where he met Ali and majored in Sales and Business Marketing, and earning his MBA in Healthcare Management at Loyola University Chicago’s Quinlan School of Business.

“Lake Forest is a phenomenal community, with great schools and access to a beautiful beach, among so many other qualities,” says Dacy, who continued his wrestling career as a four-year varsity Scout at Lake Forest High School, competing in the 103-, 119-, 130-, and 145-pound weight classes; he also played wide receiver and safety for LFHS football teams.

“It’s a safe place to live,” he adds, “and everybody in Lake Forest is nice and pleasant.”

Dacy was named president of the Lake Forest Lacrosse Association last summer, after serving for two years as one of the association’s board members. He calls the nonprofit “the premier” lacrosse community organization in Illinois.

“I never played lacrosse, but it’s an amazing sport, a sport that receives tremendous community support, and it’s a sport my kids love,” says Dacy, who, along with others, has lent his voice to the promising drive to add at least four synthetic-turf playing fields to Deerpath Community Park.

“It’s looking good,” he says. “Our community needs the fields. We’re hoping to get Lake Forest’s approval for the fields in 2022, and then maybe make them available for teams and kids, beginning in 2023. It’s a big part of my life, as a father, watching my kids play sports and supporting them. It’s why, during my free time, I’m probably near a field or in a gym, helping coach or just experiencing the joys that come with being there for them.”

Another fond memory of his father must have flashed.

Must have warmed his heart.

“I’m heavily involved with my kids and their athletic pursuits because that’s the way my father was when I was a young athlete,” Dacy says. “That meant so much to me, his presence, at a meet or at a game. He cared. He loved being a father.

“Family,” the grateful son continues, “mattered to him more than anything else did.”