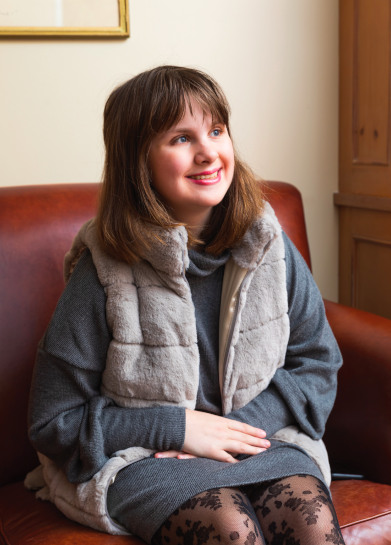 Lelia Purky at her home in Lake Forest. Wardrobe by Evereve Photography by Robin Subar

WHEN LELIA PURKY was 18 months old, she was diagnosed with cerebral palsy (CP), a condition that often makes introductions for her before she ever says a word.

“I know I move differently than others, but I don’t want people to just see that,” says the 23-year-old art and history enthusiast. “I want people to see me before they see my disability.”

CP is a group of disorders that affect a person’s ability to move and maintain balance and posture. When Lelia failed to hit certain milestones as an infant, her mother Anne pushed doctors to determine why.

“Once we knew it was CP, we had a diagnosis we could work with,” Anne says. “And my husband and I were fortunate to have the resources to help find the interventions Lelia needed to make her stronger.”

But it often wasn’t the physical challenges that Lelia faced that were the hardest, it was the social and emotional ones she encountered when she got to school that were tough.

“I remember being in second or third grade and having a boy bully me,” she remembers. “I was called names. I was shoved into a fence. The school did what they had to to protect me, but you never forget those things.”

When it came time for Lelia to go to middle school, she transferred to The Cove School in Northbrook. There she was able to form the genuine friendships she longed for. 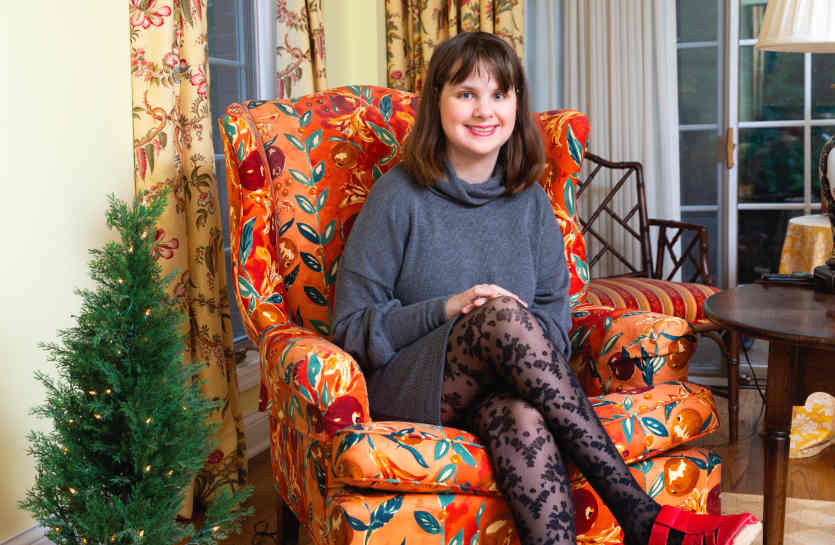 “Cove was a very special place for me,” she says. “I feel like the people there could see beyond how I walked.” Lelia was a regular fixture in the school’s theater program—often grabbing a leading role in their annual performances.

During her ninth-grade year at Cove, Lelia’s parents encouraged her to try a class at Lake Forest High School.

“I was so scared, a little like being thrown into the frying pan,” she says. “I took a ceramics class, made all of these lovely pieces, and the teacher liked me.

“One day I met this nice girl, but I realized she was kind of talking to me like a puppy. I didn’t think much of it at first. I just wanted to try and give her a chance. But when I saw her talking with her other friends, she had a totally different voice.

“I went home that day and cried and told my mom that I didn’t want to go back. Of course, she told me that I could drop the class, but something inside of me snapped and I was like no. I’m not going to let someone else take my joy. If I drop out, she wins. So, I went back and just did my thing. I did end up making some friends. This was my triumph to be visible to the regular world.”

It was this very triumph that Lelia wrote about and then went on to perform in two different venues in Chicago. It was called “Invisible.”

“I think people really saw this situation through my eyes,” she says. “What it’s like to be invisible and then to one day decide you’re not going to live that way any more. It was a performance that shocked everyone and brought them to tears and a standing ovation.”

Even Lelia’s mother was moved by her spirit. “Lelia has always found the person that was the least understood, or the most abandoned, and try to draw them out,” Anne explains.

Before Covid, Lelia was taking classes at John A. Logan College in Carbondale. As part of her studies, she had an internship at a specialized adult rehabilitation center.

“The center was supposed to be a place where adults with special needs could come and read books or play games,” Lelia says. “The center didn’t have many things for its clients so I would bring some things from home.”

There was one young woman that Lelia would read to every week. She was non-verbal and didn’t give Lelia any clues that she was getting much from their interactions.

When Lelia’s internship was over and she was making her way through the center saying goodbyes, including the one woman she had faithfully been reading to, she was taken by surprise.

“This woman who had never shown me any kind of emotion or response stood up out of her chair and gave me the biggest hug,” Lelia says. “I’m smiling so much remembering it.” The center gave Lelia an award for her work for clearly reaching their clients in the most impactful way.

Lelia’s heart is much bigger than her immediate surroundings, as exemplified in a family she met from the Philippines over Facebook.

“There was this young mother who was desperate to find a special formula for her baby,” she says. “It was the only kind her baby could tolerate.” Lelia ended up selling several paintings she had made in order to raise money to purchase the baby’s formula.

“Just when I was starting to lose hope that the formula would get to them in time, I woke up to pictures from this family with the formula near the baby,” she says.

Lelia hopes to one day meet this family in person. She also dreams that someday having a disability like CP will no longer be a factor in how people see her.

“My hope is that one day, maybe in 2040, people will see kindness before they see anything else,” Lelia says. With Lelia leading the charge and setting the example, that someday may come sooner than she thinks.