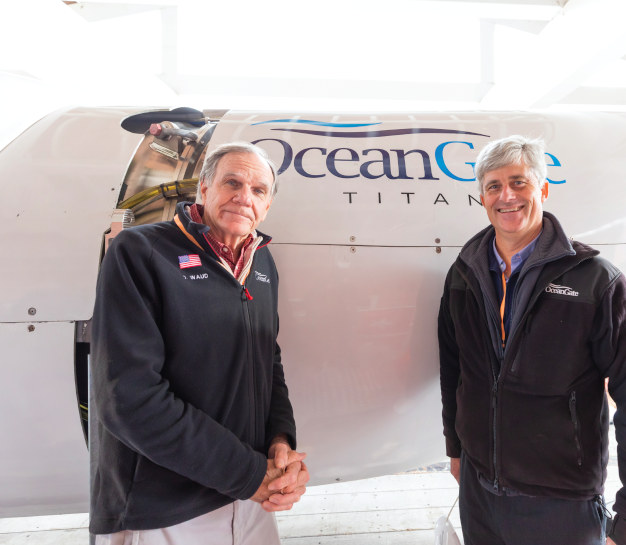 IN 1997, the blockbuster movie Titanic brought to life the story of the supposedly unsinkable ship that, alas, sunk.

Since 1985, when American oceanographer Robert Bollard sent an unmanned submersible more than two miles below the surface and located the wreckage of the Titanic, the remains of the ship have been a subject of much fascination among scientists, oceanographers, and Titanic enthusiasts.

The first expedition to the Titanic in 14 years took place in June and July 2021 and was conducted by OceanGate Expeditions. For the first time, an expedition utilized a submersible—named “Titan”—that transported five people below the surface to capture 4D images of the Titanic.

On November 20, the submersible Titan was the center of a one-day experiential exhibition, “Titanic Experience Tour,” at Gorton Community Center in Lake Forest.

Spearheaded by Titan Mission Specialist and Lake Forest Resident David Waud, visitors were able to get up close and personal with the Titan, which sat just outside the Center’s south entrance.

“David has been a strong supporter for years and years, been on our board, and been involved as a donor,” says Gorton Center Director of Special Events Ann Wildman. “He had tried to do an expedition for ten years or so and it fell through, he finally was able to go on the expedition this past summer.”

Part of OceanGate’s mission is to share the research discovered during its expeditions as well as the adventurous aspect of its work through various exhibits across the country, which led to Waud being able to bring the “Titanic Experience Tour” to Gorton Community Center.

During the exhibit visitors were able to meet the crew of the Titan, which included content experts, marine biologists, veteran Titanic divers, and Waud himself. They also viewed never-before-seen footage from the Ocean-Gate Expeditions dives on the Titanic wreck site. They were able to briefly sit in the Titan in groups of five.

Veteran diver and Titanic expert PH Nargeolet, and Submersible Pilot and CEO Stockton Rush shared their experiences descending over 12,800 feet beneath the ocean’s surface with expedition teams, surveying the current state of the wreck and debris field and capturing discoveries with photos, 4k videos, and sonar technology.

Gorton Community Center’s mission is to be the gathering place in the heart of the community where people connect, converse, learn, listen, play, and perform, so the Titan exhibit was right in its wheelhouse.

“It made a lot of sense for us to do it and it was another medium in which to explore science as well,” Wildman says. “Expeditions alone are interesting, but if someone was looking to curate a trip it kind of creates awareness around that.”

Wildman says attendance was exceptional and the exhibit was nearly sold out.

“I would say that this is one of our more successful events,” she says. “The good thing is that it’s different than anything we’ve ever done. We do lots of live entertainment, classes, and films, but never have we brought a real submersible that has literally dove on mission to the Titanic and that’s an amazing thing to be part of.”