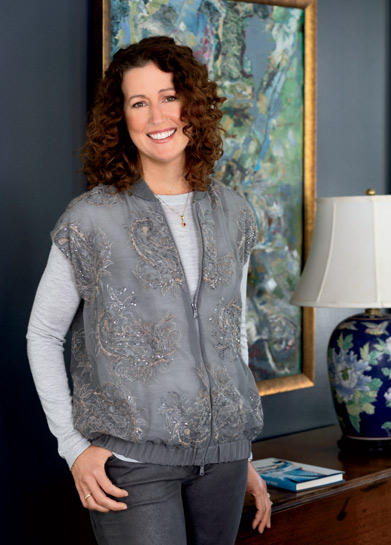 WHILE MOLLY MELIN did not grow up in Lake Forest, she is definitely making her adopted home town proud. With the release of her first book, The Building and Breaking of Peace: Corporate Activities in Civil War Prevention and Resolution, Melin has accomplished a bucket list goal that many strive for, but few achieve.

Melin teaches political science and international relations at Loyola University Chicago and was able to find ways to incorporate working on the book into her teaching.

“I ran study abroad programs in the places where I was doing field work. It has been a way to bring together my teaching and research,” Melin says. 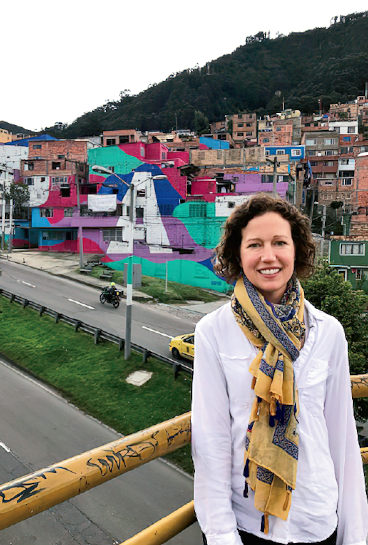 At a mural project for Javeriana University (“Paz” is peace) in Bogotá, Colombia

This field work covered case studies in Colombia, Northern Ireland, and Tunisia. “It was pretty awesome,” Melin says. “We traveled to Colombia as a family several times, so I was somewhat familiar with the background. But Tunisia and Northern Ireland I had to learn about from scratch.”

She is quick to say that she truly would not be able to do any of this without the extreme support of her husband, Phillipe, and her children, Charlie and Maizy, who are in 8th and 5th grades at Deerpath Middle School.

In fact, she was in Tunisia, doing field work and enjoying gorgeous 75 degree days, when her family was home during the polar vortex. That took an extraordinary amount of understanding on their part!

Melin jokes that while many of their kids’ friends would go to places like the Caribbean for spring break, she’d come home and say, “Guess what, we’re going to Belfast.”

“Each country has an interesting history of corporate involvement in different ways. In Tunisia, they have a really strong union structure. And it was really the unions that prevented the Jasmine Revolution from becoming violent,” Melin says. “They have really powerful unions and societal leaders that made sure that the Arab spring in Tunisia was peaceful.” 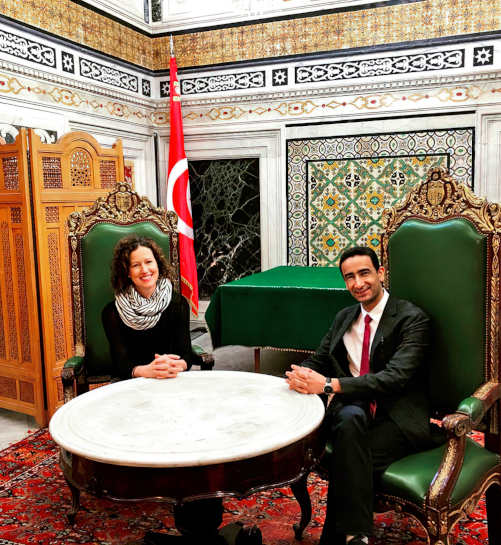 Meeting with Dr Maboudi in Tunis, Tunisia at the Presidential Palace

“Ireland is not really a case where domestically headquartered companies were proactive in preventing bombings. Most of the companies there are Royalists and seen as British Colonialists and they weren’t that interested in the peace process. It was actually the U.S. who became involved, passing legislation requiring any American companies operating in Ireland to engage in fair hiring practices.”

“In Colombia, the puzzle that got me thinking of this project, they have a really active private sector that was engaged in the peace process in a really overt way.” Melin says that even the cosmetic companies had things they were marketing to promote peace, including colors like peaceful pastels. Or beer caps that said, “I believe in peace.” “They had a strong group of 100 companies that came together and had a peace marketing campaign.”

Melin’s dissertation researched countries’ roles in international conflict management. She then became interested in how it’s in the interest of the private sector to promote peace and stability. “Broadly, people don’t talk about how the private sector acts as political actors; I felt there was a missing piece in the academic political science world. They weren’t thinking about corporate responsibility. I tried to make the book accessible to people not just in the academic world.” 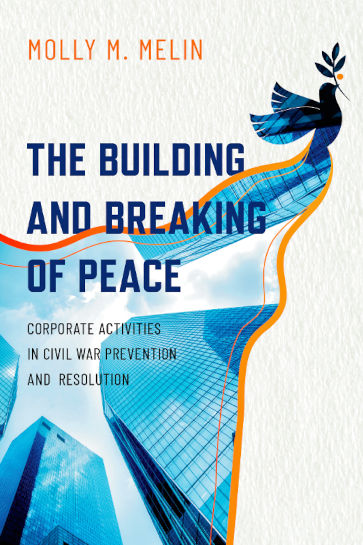 The book, from Oxford University Press, is available through The Lake Forest Book Store and Amazon. According to the Lake Forest Book Store’s web site, the book examines how “private corporations are rarely discussed as playing a role in efforts to curb civil violence, even though they often have strong interests in maintaining stability. In The Building and Breaking of Peace, Molly M. Melin develops a theory of the conflicting roles corporations play in both building and preventing peace.”

She is originally from Georgia and Phillipe is from California. Melin says they love being a part of the Lake Forest community. “Lake Forest reminds me of the town I grew up in; it feels so familiar,” she says, “other than the winters!”

“It was so easy for us to get a great group of friends here and we have a real neighborly neighborhood. Everybody is friendly and we have block parties and book clubs.”

One of the side benefits of the book coming out is that Melin’s friends now “kind of know what I do. I’ve been doing research all of my career. The assumption is if I’m not physically in a class, I’m not working. And the reality of my job is 40% teaching. I feel like I now have a greater understanding of what my job entails amongst my friends.”

Melin says, “I love teaching as well: I get to see the outcomes from my teaching in such an important way: I’m actually having an effect on the students and can see it more immediately than research allows. In research, I can work for 5 years on an article and not know if it really changes the academic conversations around that topic. In teaching, I see students fall in love with political science and understand the complexities of global politics in just a few short months!”

And while she has found the process of publishing her first book very fulfilling, Melin also says, “Writing is a strange process (and I’d imagine this is true for any author) in that you can work all day on something and have very little “product” to show for it. There are some days, in which it clicks, and you figure out a piece of the puzzle you’re working on. With the book, the puzzle was so big it sometimes felt overwhelming to try and tackle. Other days, I would read something or see the data in a new way and things would fall into place. It was really gratifying to do the hard part and see the pieces come together.”