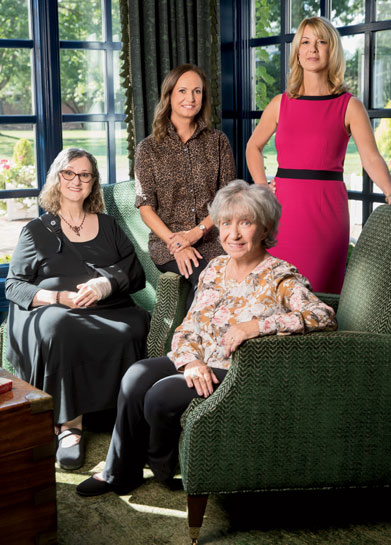 LAKE FOREST RESIDENT Cynthia Holck was a child when she announced to her family that she was interested in finding out about her “real parents.” She recalls that her adopted family appeared surprised and disappointed. “My sister said to me, ‘How could you do that?’ And that stuck with me.” Holck didn’t want to trouble her family, but she was curious about her roots. “I always had a sense that I was different from my adopted family. I loved them, of course, and they loved me, but on some level, I felt like I didn’t belong.”

Holck conducted informal searches as an adult, but the state of Illinois was restrictive about the release of information from adoption records, providing only general non-identifying information such as age, marital status, occupation and general physical descriptions. Holck was frustrated with the numerous obstacles she faced every time she searched. When she originally contacted the orphanage where she was placed as a newborn, St. Vincent’s Orphanage, now run by Catholic Charities of Illinois, Holck was told many records had been destroyed in a fire. “The agency was able to provide me with some details about my birth parents including their ages and they confirmed the period of time that I spent in the orphanage, but that was about it,” says Holck.

Disenchanted by so many dead ends, Holck buried her dream for many years. Then Holck met with Lake Bluff resident and psychotherapist Donna Oldenburg of Envision Therapy. “One of my close friends was dying of cancer, and I wanted to know how to be with her, how to support her through treatment as a caregiving friend. Donna was extremely helpful to me and we worked together for a while,” Holck says. After her friend passed away, Holck wanted to continue working with Oldenburg regarding the unresolved feelings she was experiencing as an adoptee who hadn’t successfully located her birth mother. “I was interested in my medical history, in my birth parents’ backgrounds, but what I really wanted, more than anything, was a photo of my mother.”

Oldenburg, an adoptive mom of two daughters, remembers feeling compelled to help Holck. “I had to do something, but I wasn’t sure what I could do. Searching for someone’s birth parents is not my work, but I knew that Cynthia’s pursuit would be fraught with emotion. There are a lot of feelings adoptees experience including loss and grief. I wanted to support Cynthia as she navigated the feelings of a potential discovery of her birth mother, but I also wanted to find a way to assist in her search,” says Oldenburg. With Holck’s permission, Oldenburg turned to the Lake Forest Lake Bluff community via a Facebook services page.

Within hours, Oldenburg received numerous tips, suggestions, and advice from dozens of residents. “I couldn’t believe how many people responded and offered to help. It was heartwarming and it absolutely reinforced what I love about this community,” Oldenburg says.

Laura Brinckerhoff of Lake Forest was one of the first replies that Oldenburg received. Brinckerhoff has been interested and active in genealogy research for decades. An avid reader with adept research skills, Brinckerhoff was able to immediately locate copies of records and family information for Holck. “It was a fairly easy search,” Brinckerhoff says, who also located photographs of what she hoped were Holck’s relatives. She immediately contacted Oldenburg. “I think I found her family,” she wrote. Although both of Holck’s parents were deceased, Brinckerhoff discovered two potential biological sisters, which she assumed would be half-sisters.

“I was bursting with excitement when Laura told me she thought she found Cynthia’s family. I looked at the photographs and immediately noticed a resemblance. And I remember thinking, ‘this feels real,’” says Oldenburg, who checked in with Holck to share the news.

“In just a few days, I had documents, photos and information about my birth parents and my potential sisters,” says Holck, who was elated at the discovery. “My birth mother and father had two children before they married. Both of us were adopted through St. Vincent’s, but I was surprised to learn that they went on to have four children.”

Holck located and reached out via letter to a biological brother and enclosed a copy of her original birth certificate, which Brinkerhoff had located. Catholic Charities offered to contact Holck’s other biological sister on her behalf. Holck hoped someone would respond to her quickly, but she worried that her letter might not be received well. “I considered that my biological family was probably unaware of any of this. I didn’t want to disrupt anyone’s life so I made it clear in my outreach letter that I was mainly interested in seeing photos of my parents and learning about any medical history that might be important. Most of all, I hoped someone would just respond to me.” 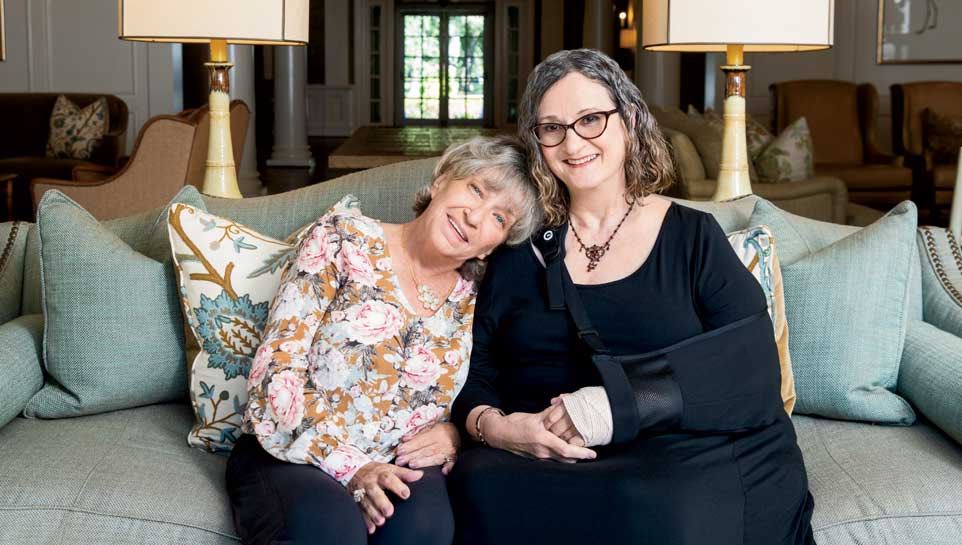 Marybeth Hall of Santa Fe, New Mexico received Cynthia’s letter and birth certificate from her older brother. “He didn’t know what to do with the information, so he sent it to me.” When Marybeth looked at the birth certificate, she instantly recognized her mother’s signature. Hall immediately contacted Holck and Catholic Charities, and she re-registered her Ancestry.com account, which had been deactivated for more than a decade. Soon, Holck and Hall were communicating regularly. “We hit if off immediately,” Hall says. “Quickly, we agreed that we should work together to locate our other sister.”

Within a week of reaching out to Catholic Charities, both Holck and Hall located Beth Coniglio of Des Plaines.

Coniglio knew she was adopted at a young age. “I remember bragging in front of my first-grade class that I was adopted. My teacher pulled me aside later and warned me never to tell anyone I was adopted.” This memory impacted Coniglio, who associated shame with her adoption for years. “My whole personality…my whole life was affected,” she says. And yet, Coniglio remained curious about where she came from. “I yearned for any information at all. It bothered me a little bit that I didn’t know anything.”

Like her soon-to-be-discovered sisters, Coniglio had dabbled in family research over the years, but she had given up, assuming she might have to hire private investigators to help her. “I thought about what I would do if I found my birth mother or biological family and I didn’t want to disrupt anyone’s life. I figured these people had their own lives, marriages, children and family histories, what could I do?”

Then a letter arrived from Catholic Charities. Hall worked with a case worker at the agency to connect first with Hall and then Holck. Soon the sisters were sharing photos and stories. “My high school graduation photo looks so much like my father’s photo,” says Coniglio, who was relieved to finally find family. “The whole idea of ‘where did I come from?’ just flew out the window. I felt so much relief…more than relief actually. I felt joy. There was a real joy for me in this discovery and reunion.”

“I always wondered if there was someone out there like me,” says Holck, who arranged to meet Coniglio for dinner. “I sat across from her and got lost looking at her beautiful smile and realizing I was face-to-face with my sister.”

“I noticed a similarity between Cynthia and me immediately,” says Coniglio. “It felt wonderful.”

All three sisters plan to get together in person when it is safe to do so. In the meantime, they maintain regular contact with each other via phone and e-mail.

“I never imagined this search would proceed as it did. It exceeded all my expectations,” says Oldenburg, who credits Brinckerhoff and the Forest Bluff communities for helping Holck so quickly and bringing her a lot of joy.

Both Holck and Coniglio feel that they have a stronger sense of who they are and how they fit into the world. “I don’t feel like a part of me is missing anymore,” says Holck. “I felt like a part of me was missing before I discovered my two sisters. I feel whole now. I feel like my life dream has come true.”

My big thing throughout this whole journey has been moments where I wonder whether I’m doing the right thing. I struggled with feelings about reaching out and notifying potential relatives. I wondered if I ever should have done any of this,” she says, “The process is emotional, and you have to be prepared to understand the people you are contacting might not be receptive. It can be complicated. And unnerving.” -Cythnia Holck, Lake Forest

“The strength of our community enabled me to help Cynthia find her birth family. I’m so grateful.” -Donna Oldenburg

“Adoption often marks the joyous beginning of a new family embarking on a rich journey together. Adoption often marks an ending, as well, and the separation of children from their parents and families of origin. Even in the most ideal circumstances where some level of ongoing contact continues with extended family members, adoption-related issues will likely arise at different points in the lives of people who were adopted and their birth or adoptive parents. A willingness to learn about these issues and seek support, if necessary, can help ensure that parents and those who were adopted experience happy and healthy family lives.” -Children’s Bureau (www.childwelfare.gov)