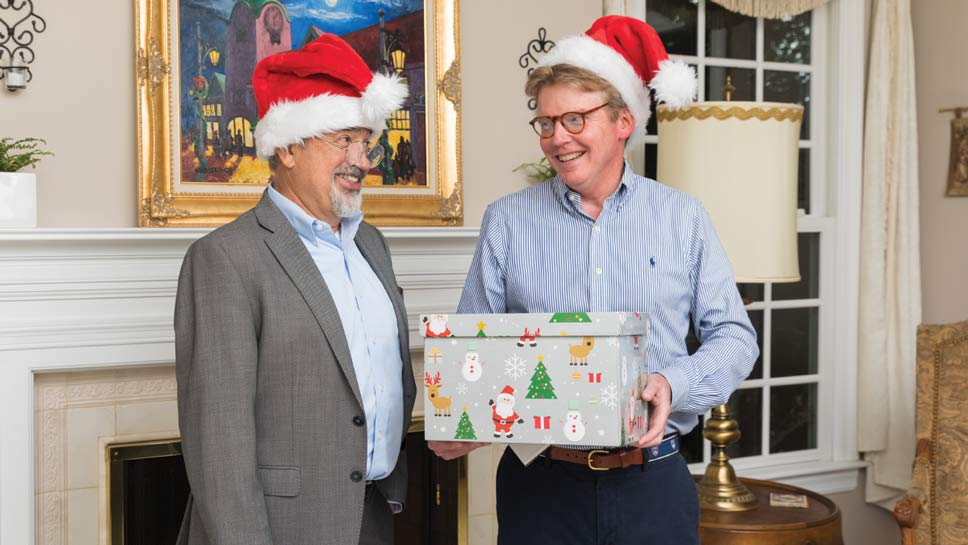 IT’S A GREAT DAY OUT, piling the kids in the car, heading off to the Christmas tree farm, and chopping down just the right tree for your home. Put the lights and ornaments on and you’re ready for the season to begin. All smiles. Then mom or dad asks, “Who’s going to water this thing?” Silence.

Turns out, there is a solution for that.

The friendship between Daniel Muñoz and Peter Hoagland goes way back. Both with marketing backgrounds, the two made a habit of meeting for coffee on Sundays to bounce product ideas off each other. One day, about four years ago, Muñoz, a resident of Lake Forest, called up his friend and said he had an idea he wanted to share with him, and that they should have lunch. Hoagland, from Lake Bluff, readily agreed.

At lunch, Muñoz took out of piece of blank paper and sketched out his idea, a device that could automatically water a freshly cut tree, eliminating the hassle of having to crawl under the tree—and over the presents—to keep it watered and alive.

“I came in and talked with Peter because something that happens in most homes like mine is they bring the tree in the house and my wife usually starts watering it and then after two or three days she starts asking who else is going to do it,” Muñoz says. “It basically becomes an argument in the household.”

So, Muñoz went online to see if there was a product that could solve the problem, something that he could just plug it in and be done with it. He found that there were a few options, but most were prone to causing a minor flood. His creative juices started flowing.

“I designed something on a piece of paper, very crude. When I showed it to Peter that Sunday I had filed for a provisional patent,” he says. “When Peter and I talked about it we said, ‘Hey, let’s do some market research to see if this really has legs.’”

The idea was tested with about 100 consumers and the results were extremely positive. The two entrepreneurs were off and running. But bringing a product to market doesn’t happen overnight.

“Basically, what you end up having to do is three things. You have to raise money to get the product and project up and running, then you have to find a manufacturer who can make the product,” Hoagland says. “Then, you have to actually do a little bit of research on product naming and trademarking.”

Hoagland says they remained in a “concept state” for the first year-and-a-half, during which they landed on a name for the product— HoHoHoH2O—and a design for its packaging and outer box for retail. Initial funding was provided by friends and family.

The product has been commercially available for two years, and HoHoHoH2O is going into its third selling season. They built a Website (HoHoHoH2O.com) that includes a video demonstrating how the product works. It’s the top selling product of its kind on Amazon, and judging by reviews, customer satisfaction is through the roof.

Central to the product’s success is it’s packaged to look like a Christmas present, so it blends in with its surroundings.

“The components of the system are you have a sensor to a pump and a computer directly in the box that looks like a present,” says Muñoz. “The sensor is on the end of a tube in the tree stand attached to the trunk with a Velcro strip. You plug the unit into an electrical outlet, you fill the tank with water, and you turn it on. That’s it.”

Muñoz and Hoagland run HoHoHoH2O with a personal touch. Against the advice of many of his friends, Muñoz lists his mobile phone number on the product website, and often fields calls from satisfied customers offering thanks for providing a solution to a lifelong challenge.

One satisfied customer of HoHoHoH2O is David Gorter, the owner of Sidney’s Services in Lake Bluff and a resident of Lake Forest. Gorter says the product has led him back to having real trees come Christmastime.

“The thing I like is its simplicity, but it really did solve a problem. We had actually moved away from going to the garden store for a tree and were using an artificial tree just because of the hassle,” Gorter says. “We’ve been using it for two or three years now and it’s a relief. The tree is getting water on a regular basis and doesn’t dry out as fast.”

Gorter says he likes the product so much he’s probably given half-a-dozen away to friends and family, and it’s taught him a bit about the life of a tree.

“I’ve been stunned by how much water a tree will drink,” he says. “I don’t recall filling the base of the tree up with as much water as I do the HoHoHoH2O container. No wonder our trees had been dying.”

For more information, visit HoHoHoH2O.com, or search for the product on Amazon.