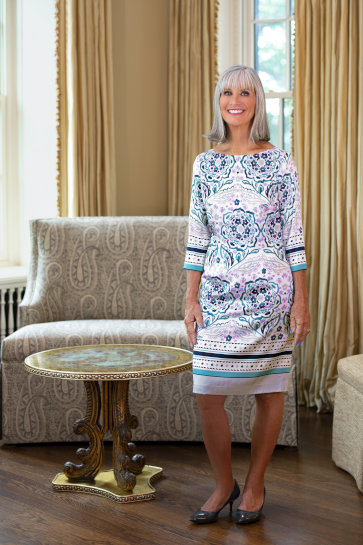 TWO PHONE CALLS, separated by about 24 years, stunned Susan Garrett. Maybe she said, “Who? Me?” each time. Perhaps she thought, “Really? Why me?” each time.

Garrett was all set to eat dinner with her family in Lake Forest when she fielded the first call. On the other end was a voice representing the Democratic Party of Illinois, in late 1997. The voice let Garrett know that the Party wanted her to consider running for state office (59th district, Illinois House of Representatives) in the 1998 election.

“I had no political experience and had not been connected to any political party,” Garrett, active in the League of Women Voters-Lake Forest/Lake Bluff area at the time, recalls. “I knew nothing about partisan politics.” 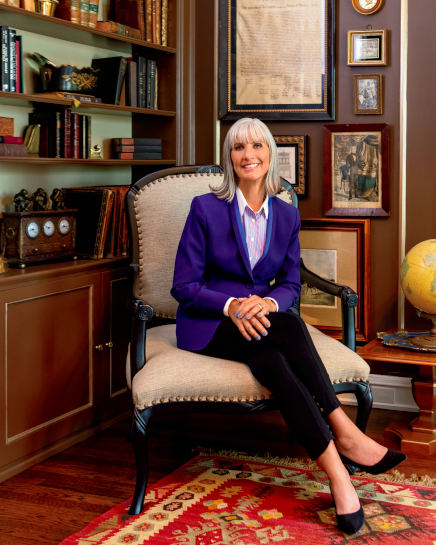 But Garrett, after a thorough rumination, chose to run anyway, won by approximately 1,500 votes—in a district that was 70 percent Republican/30 percent Democrat—and then, the following two four-year terms in the House, she served in the Illinois Senate (29th district) from 2003-2013, a total of 14 years.

Garrett answered the second phone call earlier this year. This time she heard a voice representing the History Center of Lake Forest-Lake Bluff. The voice on the other end let Garrett know that she’d been selected as the History Center’s 2021 Local Legend.

Each was recognized as someone who had contributed significantly to the community and the world.

“Shocked. I was shocked when I heard the news,” Garrett says humbly.

The 12th Local Legend will be celebrated at the History Center (500 East Deerpath Road, Lake Forest), or via Zoom, on October 7, beginning at 5 p.m. Garrett was interviewed by NBC 5 political editor, award-winning journalist and good friend Carol Marin in August; footage of that animated, compelling interaction—which drew little-known stories, behind-the-scenes anecdotes, and insights missing from standard biographies—will highlight the event.

“Susan is a powerhouse, a force of nature, an amazing mentor to women, and a multifaceted human being,” says History Center of Lake Forest-Lake Bluff Executive Director Carol Summerfield. “When we grant this honor, we want the person who had, and continues to have, an impact in a variety of areas. That’s Susan. Our Local Legends are very important people.

“Susan,” she adds, “belongs in that category.”

In 1998, the Illinois House district wasn’t your typical constituency. Far from it. It contained Lake Bluff, Lake Forest, Mettawa, Green Oaks, North Chicago, and Waukegan, among other cities and villages.

“It’s the most culturally and economically diverse district in the state,” says Garrett, a resident of Lake Forest for nearly 40 years. “Needs are so different. It was a huge challenge. My goal, from the start, was to bridge the gap. I wanted to make sure that all residents—from the wealthiest to the poorest—had the same opportunities, had access to the same state services. Or, at the least, to make sure that all were aware of the opportunities and services.

“And I wanted them to trust me.”

Garrett attended Deerfield High School and Lake Forest College in the 1960s. While majoring in political science at LFC, she “got caught up in the Women’s Movement.” She admits her generation’s trust in government during the turbulent decade was fragile.

“As a legislator I wanted to be accessible, bring government back home, and deliver for those in my district,” says Garrett, who, in her 14 years in Springfield, championed issues related to the environment, health care, education, planned communities, economic development, and government ethics.

Garrett was the chief sponsor of a major bill in 2003—the State Officials and Employees Ethics Act. The Governor’s Office summarized it “as the toughest, most comprehensive ethics reform package in the state’s history.”

“People, no matter where they’re from, want to be acknowledged and respected,” continues Garrett, who shares two grown children, Brett and Lizzie, with husband Scott and answers to “Gigi” around five grandchildren. “I was there for people. I was open and honest with everyone. I was a ‘tell it like it is’ lawmaker.”

Some five years after waking up one day and deciding it was time for someone else to occupy her seat in Springfield, Garrett and former Republican Illinois Senator John Millner—also a former chief of police in Elmhurst—founded the Center for Illinois Politics (centerforilpolitics.org) in 2018. Garrett and Millner are moderates. The Center’s bipartisan group of politicians and civic-minded folks seeks to engage Illinoisans in state and local politics through data-driven, factual, non-partisan reports and articles.

Garrett typically spends at least two hours a day on Center for Illinois Politics work as one of its 14 board members. The Center reviews all pieces for neutrality prior to publication. A recent posting addressed breakthrough COVID infections and asked, “Are we more at risk than we thought?”

“People want to know more about COVID, on many different levels,” says Garrett, who received an honorary doctorate of laws from Lake Forest College in 2012. “People are still concerned about the economy, in general. Illinoisans’ primary focus is on health—of people and of the state.

“I’ve been encouraged, recently, by the fresh approach to how decisions are made in Springfield,” she adds. “They’re no longer being made by a few. Our state government enjoyed success last year and continues to do so this year, some of it overlooked.”

Fun-loving and whip-smart, the former state majority whip contributes her extensive leadership skills for other organizations, including the Erie Family Health Foundation and the Illinois Women’s Institute for Leadership Training Academy.

But Anne Hunting can.

“Susan is still very much a part of our community,” says Hunting, a History Center board member. “She’s been involved in service her whole life. She made a difference; she continues to make a difference.”

Friend. Susan Garrett is that, too.

“We talk family a lot,” Hunting adds. “We both like to garden. We both enjoy having relaxing dinners together with our husbands.

Visit lflbhistory.org/give-join/local-legends-benefit for ticket information about the 2021 Local Legends benefit, as well as sponsorship opportunities to help honor The Honorable Susan Garrett and support the History Center’s annual fundraiser.