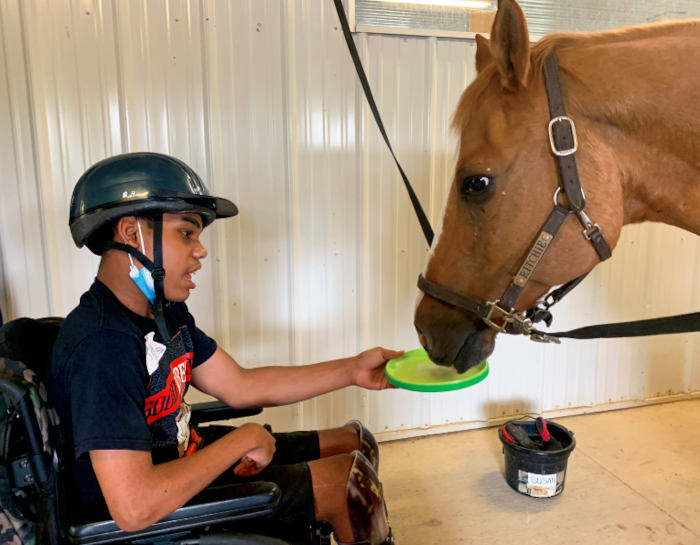 EQUESTRIAN Connection in Lake Forest will celebrate its 20th year of operation with its annual Marty’s Barn Party in October. The organization provides animal therapy for children and adults with mental and physical health challenges.

The event is named for Marty Domitrovich, a major supporter of Equestrian Connection in its early years up until his passing from cancer in 2007. The event helps to raise much-needed funding for scholarships and cost of operations.

“Once we completed construction of our current arena and hay area of the barn in 2006, Marty wanted to host a party to benefit the program,” says Diana Schnell, Equestrian Connection’s founder. “It was important to him to highlight Equestrian Connection to our community and to give back to those who helped him with his fight, the oncology nurses at Northwestern Medicine.”

Since its founding in 2001, Equestrian Connection has helped thousands of special needs children and adults, from ages 2 to 105 years, improve their quality of life. 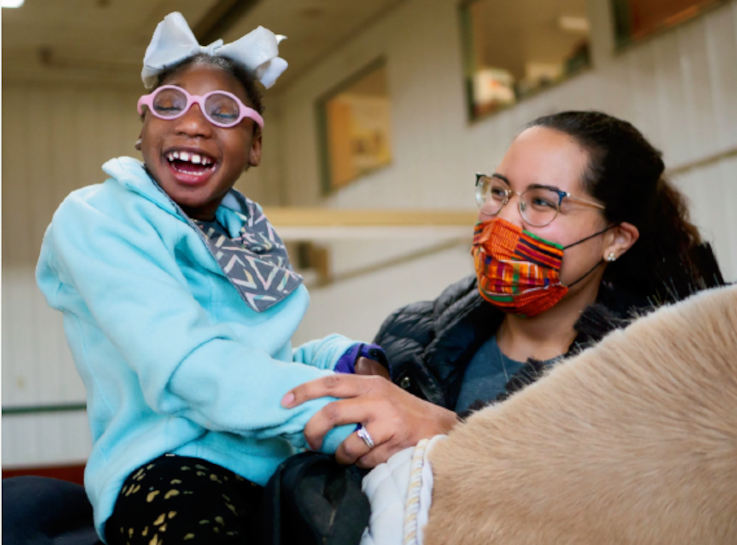 Among the organization’s diverse programs is hippotherapy, an equine therapy that uses manipulated horse movements to improve function; therapeutic riding, during which clients learn riding skills that contribute to their physical and emotional well-being; and, psychotherapy, in which clients’ engagement with a horse can address issues such as anxiety and depression. It also runs a special program for combat veterans to help them connect with each other and their families,

“Our real mission is to provide this unique therapy because we know it works and because it doesn’t just help one type of disability. It crosses many lines like mental health, physical disabilities, and cerebral palsy paralysis,” Schnell says. “When we originally started, we focused mainly on children because that’s the need I knew wasn’t being met, particularly for families that didn’t have the financial means to get therapy.”

Schnell says disabled children often got lost in the public school system because school systems weren’t equipped to provide the services they needed.

“I realized that, as a parent of disabled twins, how hard it was for me as a professional working in the business world let alone someone who didn’t have the resources to get help,” she says.

Equestrian Connection’s origins can be found at an equestrian facility in Lake Geneva where Schnell took her twin boys for therapy in the late ‘90s. She was inspired by their improvement, and the rest is history.

“I took them up there every day and after a month they were like, ‘Well, this is cool,’ and suddenly you’re taking them from a wheelchair and giving them movement that they can’t get anywhere else,” Schnell says. “You’ll find people who have MS or who walk with a cane, or a walker and they’ll tell you this is the only time they get this kind of pelvic and hip movement.”

After partnering with the Lake Geneva facility for five years, Schnell relocated Equestrian Connection to its current location on North Bradley Road in Lake Forest in 2006.

“We purchased the property in 2006 and just after that awareness of autism really took off. It was one in 600 children when we founded the company and now it’s one in 68 or something close to that,” she says. “The smells of the barn are very complicated and often can be the tipping point for a child who’s been through therapy of every kind in an office.”

“It isn’t magic, but it can be in the sense that people in particular mental health situations, who have been in clinicals over and over and over, just haven’t progressed the way they wanted,” she adds. “This is a new approach, a kind of tipping point to helping them.”

Marty’s Barn Party is Equestrian Connection’s largest fundraiser each year, providing about a third of its operating budget as well as scholarships for needy families to cover the cost of programs. Individual tickets are $175 and there are a variety of sponsorship opportunities. The organization is also accepting donations for a silent auction. Entertainment for the October 16 event will be provided by Chicago Blues Now.

“There isn’t a day that goes by that we don’t think of Marty and appreciate all he did for this program. His wife, Karen, continues to support our mission and serves on our board of directors,” Schnell says. “His entire family has been there for us every step of the way.”

For tickets to Marty’s Barn Party and for more information about the event and Equestrian Connection, visit equestrianconnection.org.