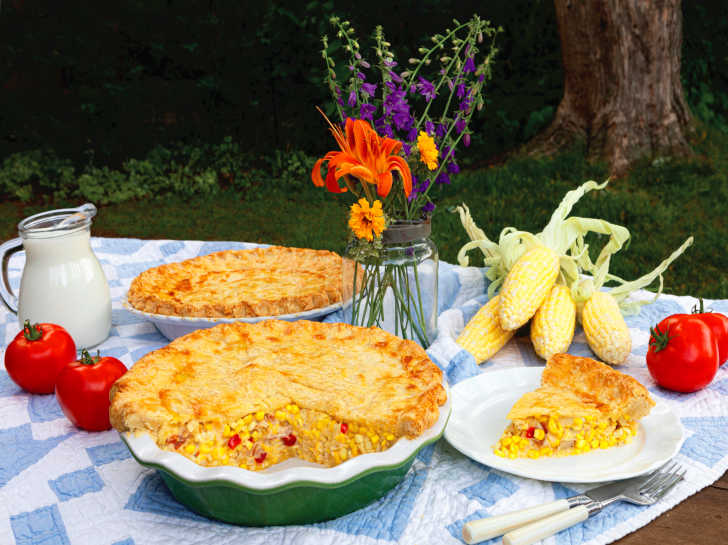 THE WAITRESS at Ernie Risser’s family restaurant in Womelsdorf, Pennsylvania, watches me looking dubiously at the gravy boat she plunked down with the corn pie I ordered. Assuming we’re in cahoots, she leans in and whispers, “I like to eat corn pie with hot milk, too!” and winks conspiratorially. Whisking away the gravy, she returns with a little pitcher of milk. Stranger and stranger, think I, new to these small-town Pennsylvania gustatory habits. The savory pie wasn’t bad, though bland. So, before I left, it had me plotting something more flavorful and akin to my Midwest upbringing: Homemade creamed corn with bacon and onion. What if I put THAT in a flaky pie crust? The result is this lovely recipe. To make it, cut fresh sweet corn from the cob, simmer it in a peppered white sauce with smoked bacon, onion, and red pepper, put it in the pie crust and while it bakes, slice some home-grown tomatoes to serve on the side. And you can skip the Womelsdorf pitcher of hot milk! Sweet Corn and Bacon Pie 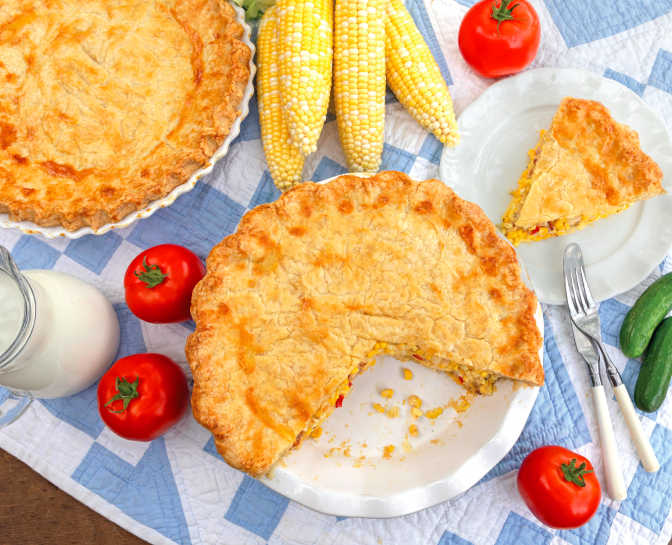 Make pie crust: Sift flour, sugar, and salt together. Cut butter into flour mixture with two knives or fingertips until mixture resembles wet sand with some pea sized bits in it. Add evaporated milk (or cream.) Mix with a fork until pastry begins to pull together. Turn pastry out onto sheet of plastic wrap and knead through the plastic to form into a ball. Cut in half. Wrap each half of the pastry in plastic wrap, then flatten into two disks. Refrigerate for 1 hour.

While dough chills, make filling: Cut corn off all of the cobs. Measure 3 1/2 cups of kernels into a large mixing bowl. Set aside. Brown bacon in frying pan until fat has rendered and bacon is well cooked. Remove to a separate bowl using a slotted spoon, leaving bacon fat in skillet. Sauté onion in bacon fat for two minutes, stirring often. Add 1/4 cup water and cover, simmering until onion is very soft but not brown. Stir corn and red pepper into onion. Add 1/2 cup water. Cover. Simmer for 5 to 10 minutes until corn is hot through and loses “raw” flavor. Season with 1 tsp salt and 1/2 tsp freshly ground pepper. Remove to a bowl.

Preheat oven to 350 degrees. Roll out one of the pie pastry disks and fit into bottom of a 9-inch pie dish. Fill pie with corn filling, mounding in the center. Roll out second pie pastry disk and top pie. Decoratively crimp edge. Brush top of pie with egg wash. Cut slits in top of pie to vent steam. Place pie on center oven rack and bake for 40 to 45 minutes until top of pie is nicely browned and filling is bubbling. Let pie cool on a rack for at least 15 minutes before cutting.

Is there a recipe you’re dying to have? E-mail us at [email protected] and we’ll start digging.