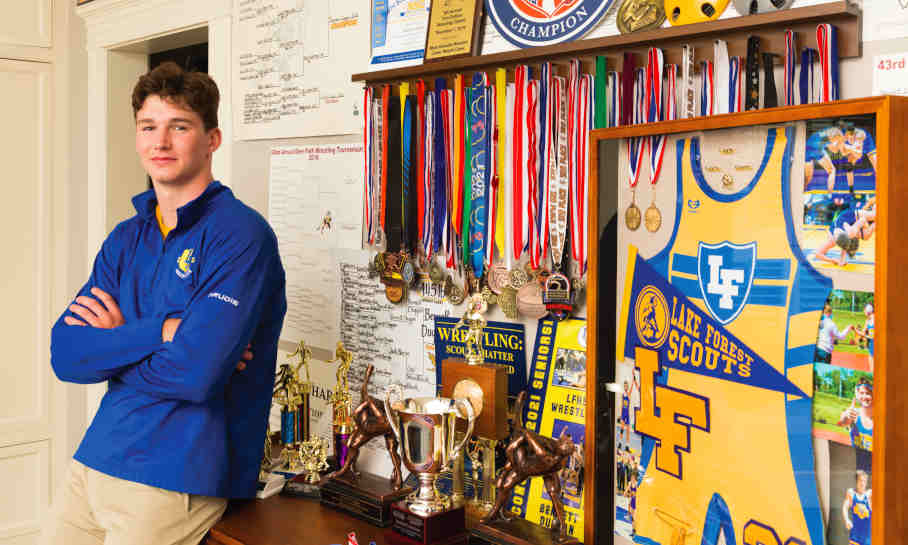 Duggan stands deskside surrounded by his medals and awards. Photography by Robin Subar

A REFEREE GRABS a wrestler’s right hand and raises it. A round of applause rings out in the arena, giving the victor his immediate, audible “medal.”

“There aren’t many things better than that in wrestling,” says Bennett Duggan, a 2021 Lake Forest High School graduate who experienced the raised hand 33 times in 35 matches in his senior season.

“Right up there, too, is the feeling I got after executing a move perfectly,” adds the state’s reigning Class 2A third-place finisher in the 160-pound weight class. “That was always extremely satisfying.” 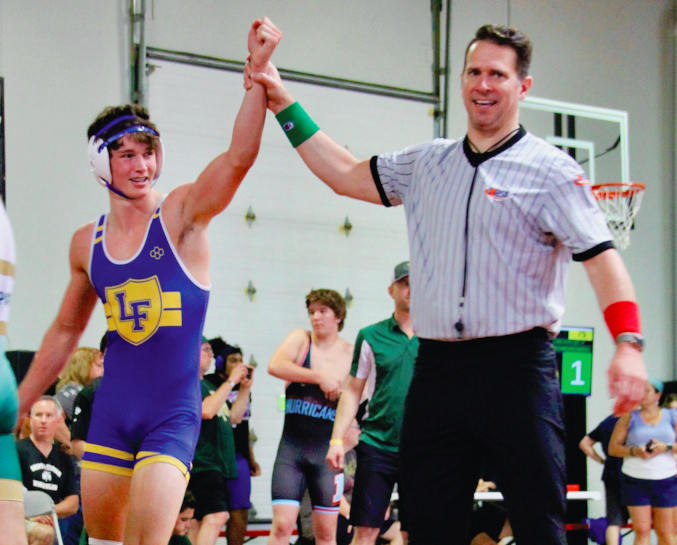 For years Duggan thought he’d grab his high school diploma and spend the rest of the summer preparing for the start of a promising Division I career in college wrestling. Coaches at the University of North Carolina envisioned Duggan, adorned in a powder-blue singlet, pinning Atlantic Coast Conference grapplers regularly after wearing them out with his extraordinarily effective low-single leg takedown. UNC coaches wanted Duggan, badly. But the school’s admissions folks in Chapel Hill wanted him to wait, so they wait-listed him.

Duggan then chose to look elsewhere. His reaction to UNC’s decision in January startled him.

“I was surprised that I was actually as relieved as I was sad,” he recalls. “I loved the sport of wrestling for years and never thought it wouldn’t be a part of my life in college. But what I discovered, what was most revealing to me, was not feeling crushed after hearing about being wait-listed and realizing I wouldn’t get to achieve what I thought was one of my dreams.”

“That is the first time it struck me that it might be time to move on from wrestling,” he adds. Duggan was accepted at the University of Illinois, and none other than former standout Highland Park High School and Illini wrestler Mike Poeta—Duggan’s youth coach at Poeta Training Center in Lake Forest—was named Illinois’s head wrestling coach in April.

“A spot had opened in his program, and Coach Poeta was interested in having me fill it,” says Duggan, who plans to major in Food Science and Human Nutrition in Champaign. “I appreciated his interest, but I thought about it and told him in May, ‘College wrestling is not for me.’ ”

“It was a very difficult statement for me to make given the opportunity being offered by Coach Poeta,” Duggan added. “But, as I saw happen with a number of my friends in other sports, I was starting to feel burned out by the beginning of my final season. We dedicate so much physical and mental energy to the sports we love that it can tire you out by the end of high school. For me, I don’t regret for a second the work I’ve put into this sport, since I credit the sport of wrestling for making me who I am today, but I feel it is the right time to hang up my shoes.” 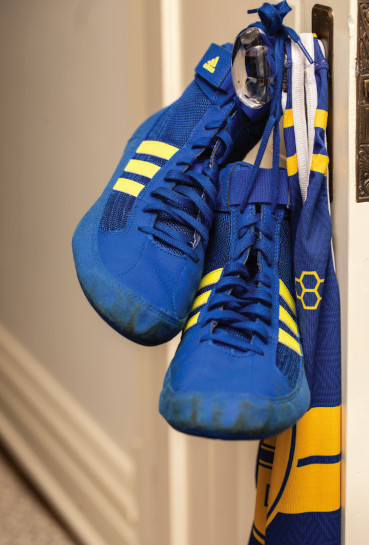 Duggan hangs up his shoes and singlet for college life.

High school wrestling was Duggan’s Eden. A two-time Illinois High School Association (IHSA) regional champion, sectional champion, and a two-time North Suburban Conference Leadership and Sportsmanship Award recipient, Duggan was named a varsity team captain—the youngest in program history—before his sophomore season and served that role in each of his final two seasons under Scouts coach Matt Fiordirosa. Duggan also broke the school records for most pins and most team points, and but for the pandemic cutting his final season in half, he was on pace to easily become the winningest wrestler in school history.

“Bennett,” Fiordirosa says, “was always willing to give a kid a ride or encourage someone to join him in a run or lift. He was a true student of the sport and very organized. I sent him to a wrestling camp and asked him to take notes on what he learned there. Bennett came back with a typed and printed document in a binder.

“Off the mat,” the coach adds, “Bennett has a personality similar to mine—bubbly and positive. We both have that ‘No Bad Days’ mentality. My entire family loves him, and my kids cry when they don’t see him enough.”

Some athletes lead by example. Others rely on the spoken word to spur and instill confidence.

Duggan was capable of being a “watch me” Scout one hour and a “hear me” Scout the next.

“I lead mostly by example, though I wasn’t afraid to speak around my teammates,” Duggan says. “When I spoke one-on-one with a teammate, it usually was with an arm around his shoulder. I liked to look him in the eye and show him a path to follow.”

Duggan’s road to a bronze medal June 25 at the Illinois Wrestling Coaches and Officials Association state meet in Springfield began with a 7-2 defeat of then-top-ranked Gaetano Console of Saint Viator in a sectional final in Naperville on June 18. The 6-foot-1 Duggan—blessed with speed and sound technical skills—went 4-1 at the state tourney, falling 5-4 to eventual champion Abe Wojoikiewicz (26-1) of Civic Memorial High School in a semifinal before besting Console again in the match for third place.

The last Scout to medal at state was Regis Durbin, who captured the IHSA’s Class 3A championship at 195 pounds in 2014.

“The way Bennett wrestled, it was like art,” says LFHS senior-to-be Charlie Heydorn, Duggan’s wrestling partner and longtime friend. “He knows what to do from every position on a mat. Such a good, all-around wrestler. The guy is also smart and willing to help anyone out. Ask anyone who knows Bennett to talk about Bennett, and you’ll hear, ‘Great guy,’ guaranteed.

“Great friend to me and a great wrestler,” Heydorn continues. “Every day in practice was fun for me, because he pushed me and made me a better wrestler. Bennett’s high energy in the wrestling room was constant.”

The son of former multi-sport athlete Jim and Laura—a pair of Hoffman Estates High School graduates—Duggan remembers setting up mats, as a third grader, in the basement at home and learning wrestling basics from his father, who wrestled and played football and baseball in high school.

“An excellent role model, the perfect role model,” Duggan says of his father, an attorney. “He has motivated me since he showed me the ropes in the sport I’d grow to love for so many years. The way my dad lives life, it’s inspiring. I admire the way he works, the way he carries himself, even the way he does chores around the house.

“I hope to emulate him.”