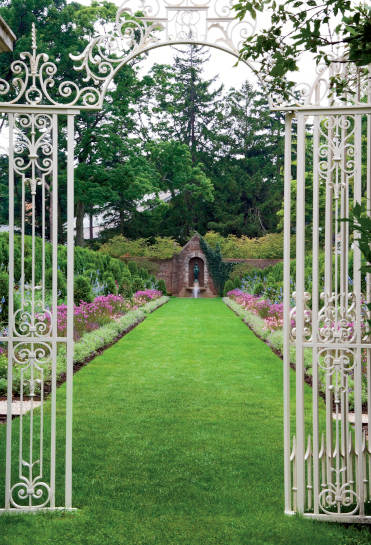 VISITORS TO downtown Lake Forest and Lake Bluff in 2021—as normal activity returns after 15 months of pandemic closures—will feel that nothing much has changed. The train stations, libraries, and major buildings are still in place, surrounded by quiet neighborhoods of middle-class houses and larger mansions. Yet in addition to the first pandemic in a century since the 1918 flu rampage, these 20 years have seen booms and busts in real estate and building, including the demise of beloved institutional buildings: a portion of Lake Bluff ’s school south of downtown, Barat College, and the 1942 Lake Forest Hospital—an Anderson & Ticknor landmark. A new business block just west of the Lake Bluff train station houses the1990s-founded Lake Forest Bank & Trust branch, while other buildings have changed restaurant and store tenants.

The same is true for Lake Forest’s central business district, where a new owner has revitalized Shaw-designed Market Square with new tenants; the city and the Preservation Foundation restored the Square’s fourth side, the 1900 Frost & Granger train station; and Abbott Laboratories led the 2015 miraculous rehabilitation of the Deer Path Inn, once again a recognized regional treasure.

On the residential scene, sales and building booms in the 2002-06 period—and lately—have changed the looks of some neighborhoods, along the lakefront north and south off East Westleigh on Bluff ’s Edge and Circle Lane. This writer, on September 11th 20 years ago, spoke to over 100 members of the Lake Forest Women’s Club in the living room of the De Bruins’ 1988 residence on the site of the 1912-completed, 1960s-demolished Villa Turicum lakefront mansion of Edith Rockefeller McCormick. In the wake of the terrorist attack, this writer reminded the group that the McCormicks had built their summer places north of Fort Sheridan after the 1893 Haymarket Affair pardons and 1894 Pullman Strike; the Haymarket 1886 event, remembered for the first non-wartime bomb thrown on North America.

Now in 2001, they were witnessing the dawn of new era of terrorism and conflict. But the economy roared back soon, and after the 2008 crash, the spacious 1988 De Bruin residence was replaced by a new version of the Villa Turicum Italian type, extending south over the adjacent lot as well.

Perhaps the most notable recreation of the Italianate type in Lake Forest’s 160 years of houses in the style is the 2002 Poulton Group-designed Florentine villa for the brilliant western railroad combiner Rob Krebs and his wife Anne, with much of its materials for doors, moldings, floors, and art imported from the Florence, Italy, region. The Krebs for a couple decades had owned the main floor of the Fiosoli Villa Kraus above Florence, the same villa where innovative art historian Bernard Berenson had lived and worked in the 1890s. This charming southeast Lake Forest evocation of Europe that recalls Mrs. Gardener’s house in Boston and the Frick Collection in New York City, both museums, has been donated to Lake Forest College in recent years.

The period that began in 2001 was a continuation of the movement to restore and make livable, by 21st century standards, many older residences. The Reid-Andersons restored the shoreline and added a garage and indoor pool to 1315 N. Lake Road, perhaps the best known nationally of Lake Forest houses—for Mrs. Kersey Coates Reed, 1931. Her grandson, Stephen Bent, and his wife have restored the tennis house west across Lake Road, also by Adler with its interior by Adler’s sister, Frances Elkins, 1929. Mrs. Reed’s 1927 Ferruccio Vitale gardens also were restored to designs by Craig Bergmann for the 2012 Lake Forest Garden Club Walk. Adler’s 1916 Pike Italian villa, 955 N. Lake Road, also has been restored, along with the architect’s 1913 Poole estate, Green Bay Road. Architect Howard Van Doren Shaw’s own 1898 Ragdale was restored, 2012, by the Ragdale Foundation, leaseholders of the historic property from the City of Lake Forest. Craig Bergmann and Paul Klug also restored the Adler residential group for the A. Watson Armours, 1917, at 900 N. Waukegan Road. This is a sibling of the City of Lake Forest and Elawa Farm Foundation’s restored stable group for A. Watson Armour, 1915. Elawa Farm’s stable group rehabilitation was a partnership of the city, the Foundation, Lake Forest Open Lands, a private developer, and the Lake County Forest Preserves. 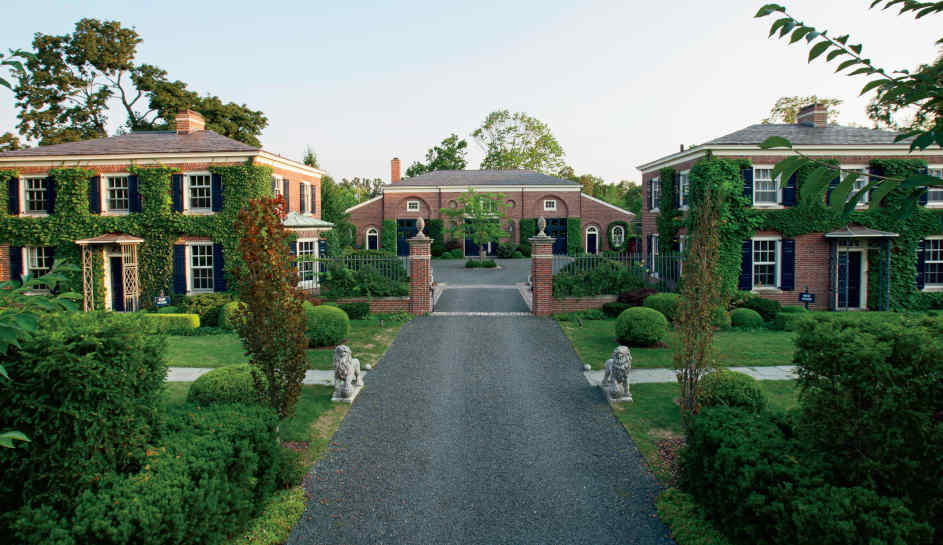 900 Waukegan Road, built in 1917 by David Adler for the A. Watson Armours and restored by Craig Bergmann and Paul Klug.

Along with much new building and restoration, also the Noble Judah and Cudahy estates on Green Bay Road north of Deerpath, these public, semi-public, and private locales were the settings for countless gatherings and events chronicled in the pages of Forest & Bluff, 2001 to 2021. From fundraisers to new business openings to garden and house walks to inspire others to step up, these glorious events have been captured, shared, and archived for future historians. Only as the pandemic recedes can residents of Lake Forest and Lake Bluff appreciate how blessed were these years for the local communities. 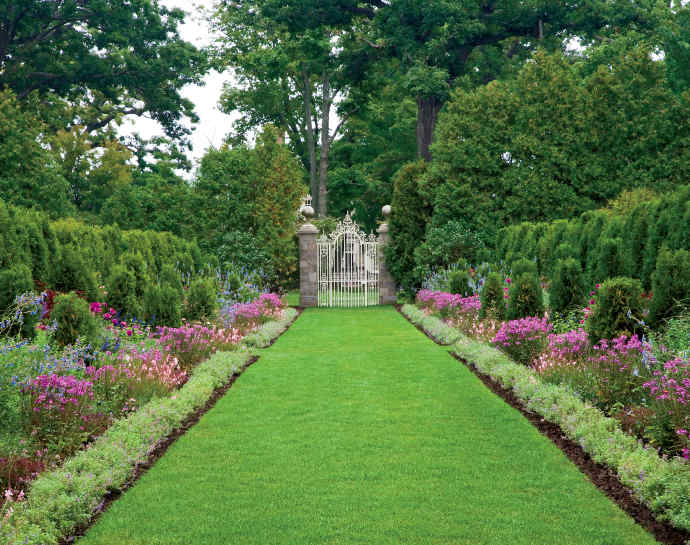 Above and below: At 1315 N. Lake Road, east and west views on axis with the front door of over 100 foot Herbaceous Border plantings inspired by vintage stereoscope images of original Ferucci Vitale planting design. 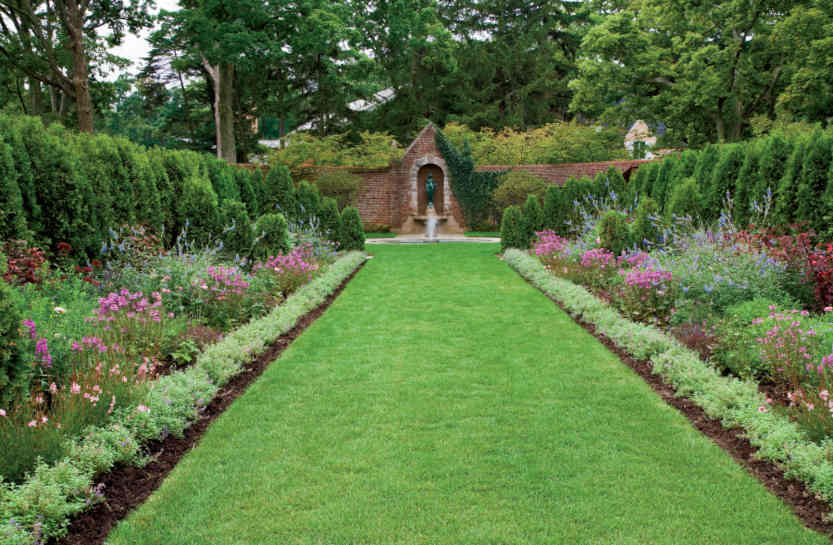 The grandest of the events often revolved around sporting events, early in the period with restored polo matches in Lake Forest and later at Crab Tree Farm in Lake Bluff. Highlights were the 2013 and 2015 BMW Western Open Golf championships at the relatively new Conway Farm Country Club course, in 2015 drawing in 2,000 volunteers to help manage the massive audiences that filled the galleries. Residents had to watch on television local swimmer Matt Grevers compete in the 2008 and 2012 Olympics, winning Gold Medals in both. Even so, major gatherings in both communities were the Lake Bluff Fourth of July parades, the annual early August Lake Forest Days, and the Friday after Thanksgiving tree lightings at dusk, Market Square. Occasionally on the national scene, the towns value their privacy even while hoping to attract elite visitors to stores, restaurants, and—in Lake Forest—now two hotels of contrasting characters. Much more can be learned about Lake Forest history and culture through several books published over the 20 years that Forest & Bluff has been in print. The author F. Scott Fitzgerald’s crush on Ginevra King, whose family’s summer place was on the southwest corner of Route 60 and Ridge Road, is explained in James L. W. West III’s 2005 One Perfect Hour. A number of books have dealt with architects and architecture locally, including two on Adler, 2001 and 2002, by Stephen Salny and by the Art Institute, respectively. Howard Van Doren Shaw’s houses have been explored in a 2015 monograph by Stuart Cohen, while another study of that year by Jay Pridmore covers the work of I.W. Colburn, much local.

This writer is the co-author of such a study of Walter Frazier and his firm’s Lake Forest houses, published in 2009. Surveys of local architecture include Houses of the Lake Front Suburbs by Stuart Cohen and Susan S. Benjamin, 2004, and Classic Country Estates of Lake Forest by Kim Coventry, Daniel Meyer, and this writer, 2003. Several books in the Arcadia Press series of photographic histories in the last twenty years include the History Center’s 2008 Lake Forest Day, 2009 Downtown Lake Forest, 2012 West Lake Forest, and 2015 Legendary Locals of Lake Forest. After the first of these, the books were the works of Shirley M. Paddock, Susan L. Kelsey, and this writer. See also Chicago’s Famous Buildings, 2003; Lake Forest College: A Guide to the Campus, 2007; and Planting with Purpose, a history of the Lake Forest Garden Club, 2016.