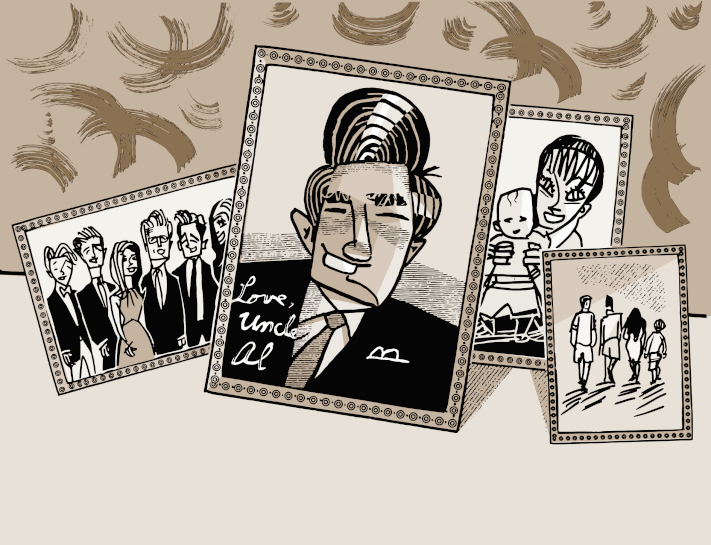 UNCLE AL ENJOYED a rather robust social life. He was a never married, traveling perfume salesman.

Uncle Al wasn’t related by blood; he was my father-in-law’s best friend. They met in the Army when my father-in-law underwent surgery to remove what was thought to be your basic, run-of-the-mill tumor. Turns out, the lump was an absorbed twin, you know, with bones and stuff. Al was the reluctant medical assistant assigned to tend to my father-inlaw’s backside. Despite Al’s lack of enthusiasm, they became lifelong friends.

My husband has fond childhood memories of fishing trips near the Canadian border with his dad and Uncle Al. Around bedtime, Uncle Al would beg off to ‘sell perfume’. He’d return in the morning, disheveled and chain-smoking, completely unprepared for a Catholic school boy’s direct line of questioning: Who buys perfume in the middle of the night? What takes so long? Why can’t the lady just make up her mind?

Years later, Uncle Al was ‘selling perfume’ at a lady friend’s house when he took a nap and never woke up.

Long story, but Al never told his family he wore a toupee; secrets were a breeze to keep before the internet, I guess. When Al-in-a-casket rolled in from Houston, the toupee sparked sitcom-like confusion. The family couldn’t be certain it was Al in there. They panicked. Even the undertakers were low-key freaking out. A lot of people were perspiring. In the end, my husband and I positively identified Al’s body.

I found out I was expecting twins the day before Uncle Al’s wake. The twins were the first of four. This month, our youngest graduates from high school. Boom. Empty nest. Nearly three decades of hands-on parenting ends.

We were driving past The Deerpath Inn recently when my son casually mentioned it was quite possibly the last time I’d drop a high schooler off someplace. Anyplace. Like ever. I went from zero to existential crisis in a flash. My stomach flipped. I had this vision: parts of me were calving off like a glacier, melting into a giant, murky puddle of Worn-Out Mother right there on the street in front of The Deerpath. Poor Doug, that adorable valet. They’d make him come out and sprinkle the mess with a bag of that sawdusty stuff the custodians in grade school used to cover barf. ‘This is how 28 years of parenting ends’, I thought to myself, ‘With me being absorbed into weird-smelling sawdust, then run over by a stream of Land Rovers, squirrels, and the heels of ladies lunching, until nothing of me remains.’

I suppose there are some aspects of parenting I won’t miss. Parent/teacher conferences immediately spring to mind; cocktails would have greatly improved those. I won’t miss the school drop-off/pickup lines; I found there simply weren’t enough swear words to cope. I certainly won’t miss those Unexcused Absence Notifications that blew up my devices during remote learning like air raid sirens: Alright, LFHS, take it easy. My kid isn’t winning any Perfect Attendance Awards, I get it.

But you know what I will miss? Reading Goodnight Moon for the millionth time and warm toddler bodies climbing in next to me at 2 a.m. I’ll miss outside voices inside. I’ll miss stepping on Cheerios. And LEGOs. Just one more time, I wish I could witness my child’s unadulterated joy, driving through Mc- Donald’s after an ortho appointment. I’ll miss the guilty look of teenagers pretending they weren’t into mischief. I might just miss it all.

The truth is, I’m not sure 28 years was enough.

For more information or to get in touch, visit T-Ann’s websites: t-annpierce.com and theconfidencetriangle.com. You can also follow her on IG @tannpiercecoaching and @the.confidence.triangle. Or just stop by—she’s probably outside chatting with her neighbors.