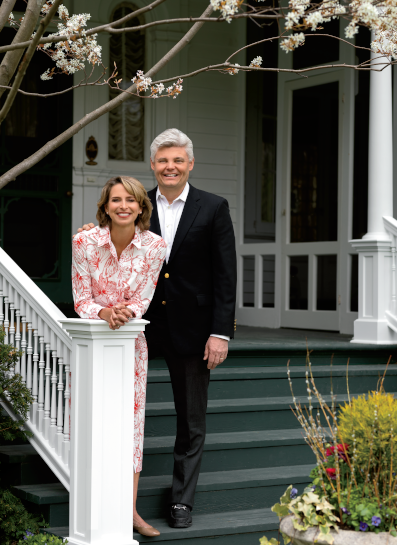 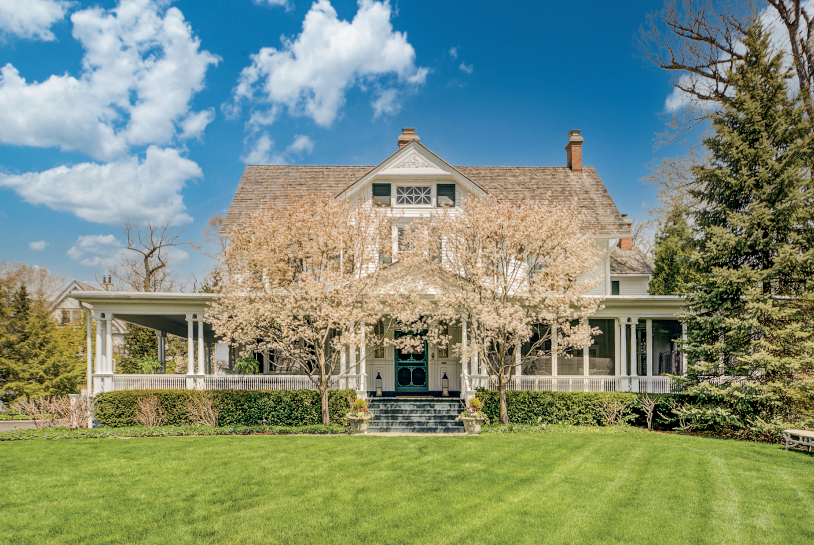 Built in 1859, 725 Sheridan Road is one of the oldest substantial homes in Lake Forest. After years of happy family memories in ‘The Nook,’ as it is known, owners Jim and Lynn Bertram are ready to move on, allowing a new family the opportunity to own this great home.

IT IS NOT OFTEN THAT one of the most charming, beautiful, and historic homes in Lake Forest becomes available.

Located just steps from both Market Square and Lake Michigan, this turn of the century Victorian provides both indoor and outdoor spaces that promise to provide the backdrop for years of family memory making.

In fact, when the current owners, Lynn and Jim Bertram, purchased the home eight years ago, they were not even in the market for a new home. They had just finished remodeling their kitchen in Whispering Oaks and were perfectly happy there.

But when Lynn saw realtor Suzanne Myer’s “sneak peak” listed on Facebook—well, she thought she’d just take a look. Walking up to this incredible home with the stately front porch is a moment Lynn will never forget.

“It had me at hello,” she says, when describing her first impression of this breathtaking property on Sheridan Road.

And indeed, the hype lives up to its reputation. This show-stopping porch wraps around the front and western side of the house. There is a charming porch swing hanging in the open section of the porch.

And the wonderful screened-in porch can be entered either through the formal living room or from the front. It is cooled by ceiling fans and green and white striped awnings.

“When we first saw it, Suzanne said, ‘This is a happy house. This is one of my favorite houses in all of Lake Forest.’ And it really has proven to be a really happy house,” Lynn says.

“We have viewed ourselves, from the beginning, as stewards of this great place,” Jim says. “And now there will be another family who will have their opportunity to live in this great home and be stewards of it.”

“We are also members of the First Presbyterian Church and have been the entire time we’ve lived in Lake Forest,” Jim continues. “Being across the street from the church is kind of neat. And to some extent, we see this old house as being an extension of the church. We’ve hosted a number of gatherings here. We’ve had some really great parties here for pretty good-sized groups.” 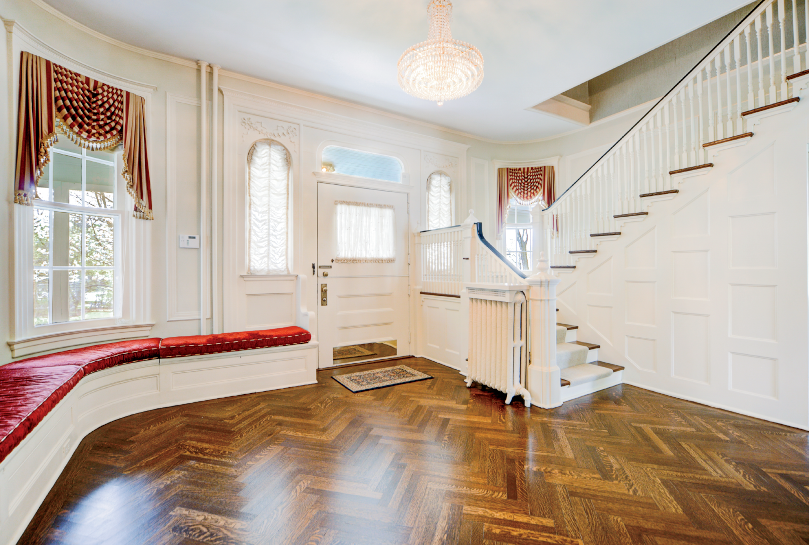 The gracious entryway of ‘The Nook’.

“This porch is just an amazing place to spend an evening,” Jim explains. “We have dinner out here frequently and it is fun to simply hang out. Whether a large group or a small group, we’ve had a lot of fun and thrown some amazing parties throughout the years.”

Of course, the magic does not stop at the porch. The house also embodies that rare quality of being large and expansive, yet warm and inviting at the same time.

In fact, the house is nicknamed the Nook. As Arthur Miller, local author and renowned historian, explains, it is called the Nook, “because there is a big fireplace opposite the front door. Then curving around each side are built-in benches, and that look was called ‘the nook’. That is short for inglenook, which was a popular arts and crafts style. It was the defining feature of the home.” In fact, it is only one of five fireplaces located throughout the home.

When talking about the home, it sounds as if it has a life of its own.

“You know, she’s old but she is solid. You love her and she loves you back,” Lynn says. “Yes, it requires upkeep, but every house does.”

Over twenty years ago, the Bertrams, originally from Springfield, were looking for a way to move back to the Midwest and be closer to family. While driving around looking at homes, “we instantly fell in love with Lake Forest and said ‘this is where we needed to be.’ Luckily we were able to find a great house in Whispering Oaks and the rest is history,” Jim says.

They have both been active in the community, Lynn serving on the board of the Lake Forest Historical society and the whole family being active members of the First Presbyterian Church.

While it is admittedly hard to leave the house where their daughters finished growing up—the time has come for a new chapter in their lives, so the Bertrams are ready to pass this historic beauty on to the next deserving family.

For history buffs, this may be opportunity impossible to pass up. In fact, Miller says that this may be the oldest substantial home in Lake Forest.

“It was built in 1859, so that is before the Chicago Fire, before the Civil War; there is not much left like that along the North Shore. The home is a contributing structure in a historic district.”

The house was built by Sylvester Lind, a town founder and Scottish immigrant. The house was then located on the current site of Lake Forest College’s Durand Institute which faces the First Presbyterian Church and is made of distinctive red stone.

Soon after the Civil War, David J. Lake—one of the original Lake Forest Association trustees—is believed to have acquired the home while his son attended Lake Forest Academy. Lake later decided to build a new home for his family, and moved this home to its current site, then known as 9 North Sheridan.

In approximately 1874, the home was sold to the Mrs. Elizabeth Turner Whitney, a widow, who lived there with her three children. Miller notes that Mrs. Whitney’s father was a railroad pioneer and became president of the railroad that travels through Lake Forest and south through Highland Park and Glencoe and south into Chicago.

Circa 1900, the architectural firm of Frost & Grainger was hired by the Aldrich family to enlarge and enhance the small house. At this time, they expanded the east living room and added glass windows and doors with the same pattern as the train station on McKinley Road.

In 1996, the detached garage—which was originally a two-story barn—was moved and attached to the house. A new foundation was then poured and an entire new section of the home was created. A butler’s pantry, powder room, large gourmet kitchen, back bedroom, and full bath were all entirely new in 1996. New heating, cooling, plumbing, and electrical systems were also added.

725 Sheridan Road enjoys a distinguished 19th century design pedigree and has been meticulously maintained with mechanical, electrical, and esthetic improvements while maintaining the integrity and beauty of the home.

While it won’t be easy to say goodbye, the Bertrams are ready for their next chapter. And ready for the next lucky family to take over stewardship of this magnificent home.

For more information on this historic property, visit 725Sheridan.info. 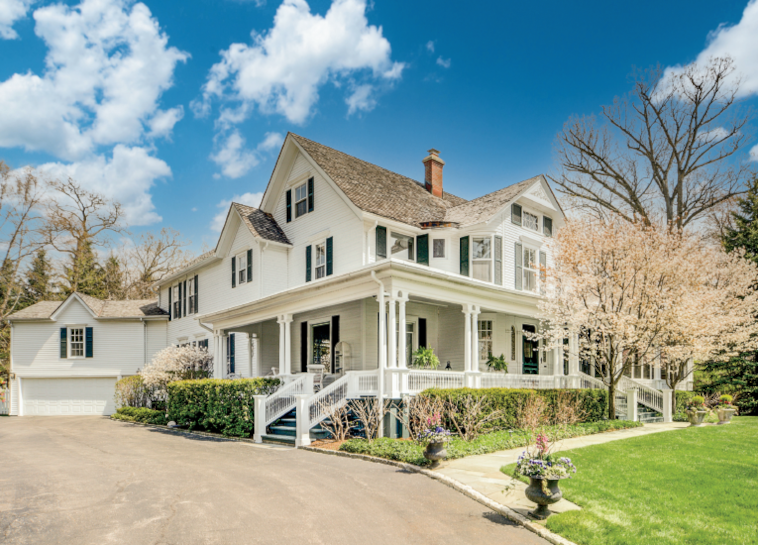 The wrap-around porch at 725 Sheridan Road.