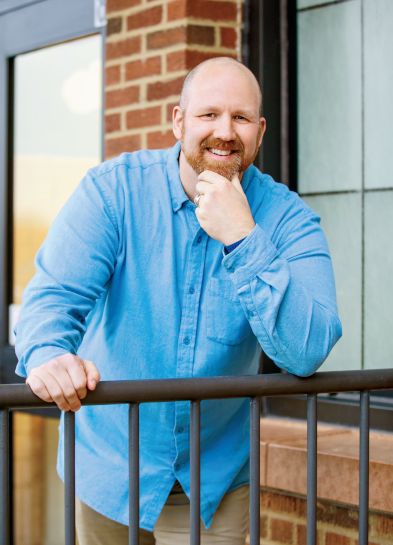 When COVID-19 hit last year, generations that had been notoriously disparate and often combative (remember the “OK, Boomer” hashtag?) finally had one thing in common— the shared experience of living through a global pandemic. But some now say it’s even more profound than that. Some now say that through this last year, through the missed birthday parties and missed graduations, through the proms that never happened and the school trips that got cancelled forever, yet another generation is emerging, and it bears the letter of the virus that claimed more American lives than World War II.

Daniel Maigler (LCSW) has witnessed firsthand the impact on the teens he works with as a social worker at Lake Forest High School (LFHS). Life during COVID-19 has been tough on everyone, but for kids who are at critical developmental milestones socially and emotionally, it’s an interruption with lingering effects.

“The developmental objective of people between the ages of 13 and 25 is to develop their identity relative to their peers. They are supposed to separate from their family and find their place in the world,” explains Maigler, who has been working at LFHS since 2008. “This is the very thing they are being denied.”

Like schools throughout the North Shore and nation, Maigler and his colleagues immediately shifted into remote mode when the pandemic hit last March. Teens were doing school work at home with parents, extended family, and younger siblings, all under one roof—all while being cut off from their peers, athletic competitions, school clubs, and other activities that defined them.

“Naturally the irritability begins to rise and even the healthiest family starts to have tension,” he says. “Then if you take a family system that already has some fissures they become dramatically exacerbated and where can they escape to? It becomes a pressure cooker of negativity where everyone feels like they are failing, and no one can tell us how long it will last.”

Moving from in-person to virtual meetings worked perfectly fine for many of his students, particularly the ones he knew well. However, he says there were a significant group of young people who were not willing to engage virtually.

“Those are the kids I worry most about, the ones where we just don’t know how they are doing,” adds Maigler. “There have always been many kids who don’t love having a long one-on-one conversation but sometimes I could just pop into their classroom or walk in the hall with them for a few minutes to show that I was interested in their lives and that I care. It is those small interactions that have been stolen and I have no idea what kind of toll it is taking on those quieter kids.”

Very quickly into the “shelter in place” orders issued last spring, it became evident that family members were getting on each other’s nerves, just by the sheer nature of being in the same space together 24/7. 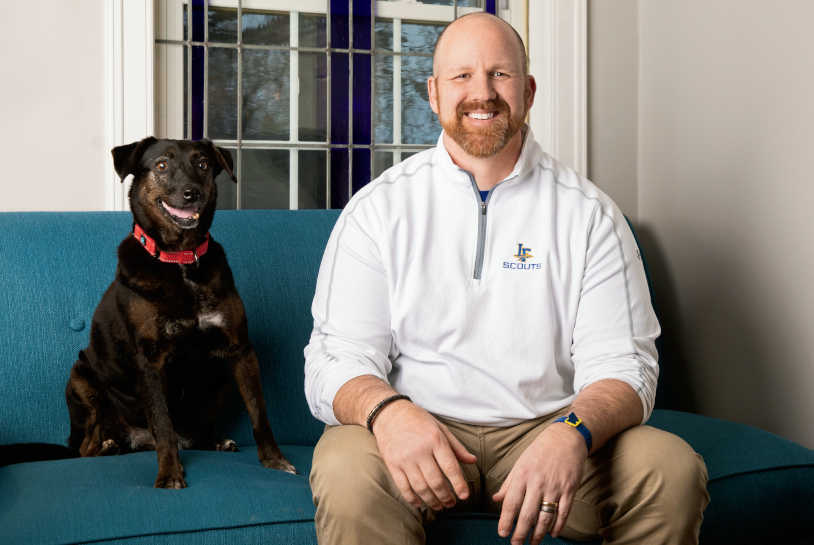 Maigler at home with his dog, Mariska.

“Kids can’t get out and access healthy coping skills because they are just stuck. It leads to feelings of lethargy and fatigue,” he says. “In February, it really seemed to hit a critical mass and I had so many students and parents contacting me to tell me that they were just out of gas. A combination of the long winter and COVID fatigue had left them feeling listless and much more depressed than would be typical for that same person a year ago.”

Maigler says he has always wanted to help people but it wasn’t until an internship at the Illinois Council Against Handgun Violence that he became interested in counseling and service, particularly with young people. “The connection for me is also very personal as I have siblings with depression, anxiety, ADHD, and bipolar disorder, as well as many other relatives who are living embodiments of the DSM.”

Through his career as a social worker and high school guidance counselor, his bottom line has remained the same—to help young people manage the challenges of adolescence so that they can be defined by their dreams and not by their history.

And that’s exactly what he has continued to do since the pandemic began— meeting with LFHS students one on one using Google Meet video for individual counseling sessions and also groups.

“I also meet with their support teams … counselors, deans, and teachers … to plan support strategies and surround them with care,” Maigler explains, adding that in the midst of this unprecedented crisis, he is also seeing silver linings. “It is less striking how many kids are struggling than that any of them are thriving, and some are.”

The upside to life during the pandemic for some teens is that they got much-needed time away from a competitive world of always having to be “on.”

“A kid could stay in and play a board game with their family or watch 16 episodes of Grey’s Anatomy on a Friday night without feeling like a loser because of what they weren’t posting on their Snap story,” he says. “Many kids got to step back and ask themselves if they really liked the path they were on, or if they were just doing it because that was what was expected by their friends.”

While stories like this do not negate the real mental health and emotional struggles many teens are enduring, Maigler says he remains optimistic that this generation will ultimately recover.

“Kids are remarkably resilient and once they can get back to a ‘normal’ life, I think they will roll with it faster than most adults could imagine,” he adds. “I think one of the biggest challenges is for the students who are going off to a college in the fall that they never even had a chance to visit. A bigger and more universal challenge though will be how do kids let themselves grieve for the year that they lost without losing more time or conversely trying to jam a year’s worth of experiences into a summer?”

As we begin to emerge from this pandemic, losses tolled and dreams deferred, Maigler says his hope is that teens and society in general will appreciate the small things in ways they never could have before.

“There are so many kids I can’t wait to meet in person,” he adds. “I hope and pray that this time did not steal the chance for a connection that I may never get again.”