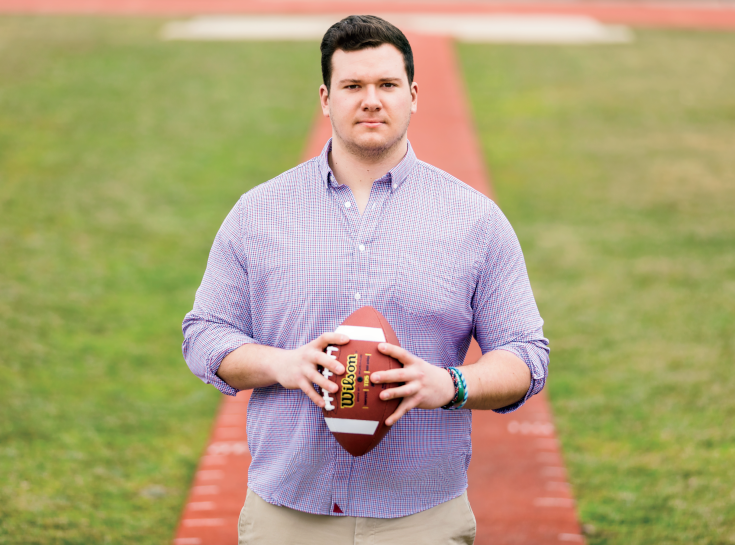 HAD A FOOTBALL BUDDY not convinced Chase Bahr to eat a salad outside Foodstuffs in Lake Forest one day last summer, Bahr wouldn’t have enjoyed a chance meeting with a beefy former Chicago Bear.

“Mac Uihlein (current Lake Forest High School senior) wanted to eat a healthy meal after our workout,” recalls the 6-foot-4, 280-pound Bahr, a 2019 LFHS graduate and sophomore offensive tackle at the University of Pennsylvania. “I was in the mood for something not so healthy at Portillo’s.”

But lettuce and vegetables won out, and, as Bahr—sitting with Uihlein and another former LFHS teammate, Lehigh University offensive lineman Charlie Aberle—was about to devour a leafy forkful under sunshine, he looked up and saw … Kyle Long, the former Bears offensive lineman.

“As soon as I noticed him, I said, ‘Kyle Long,’ ” Bahr recounts. “He stopped walking and talked with us for 25-30 minutes, after hanging up on his dad (Hall of Fame defensive lineman Howie Long). Can you believe that? Great dude. Love the way he plays. Kyle has influenced me, football-wise. I wear the jersey number (75) he does. But he’s not only about football; he’s also interested in what’s going on in the world, on the impact the pandemic has had on all of us, and how to better ourselves. He’s super intense, super funny.

“I have a Kyle Long No. 75 Bears jersey, and I rock that bad boy at school sometimes.”

The long and short of Bahr’s football career at Ivy League member Penn? Stuck in neutral, so far. Bahr—an All-North Suburban Conference First Team selectee and an Academic All-State student-athlete in 2018, his senior season at LFHS— was a backup offensive tackle as a Quakers freshman in 2019. COVID-19 then tackled the ’20 Ivy League football season, hard, wiping it out completely before it started.

But Bahr remains optimistic that he’ll land a starting gig and erase defensive linemen regularly at the next level.

Bahr and his Penn grid mates were slated to gather for their first spring practice on March 27.

“My experience, freshman year at Penn, was second to none,” says Bahr, an Economics/Philosophy double major. “It was extremely tough, handling the rigorous academics and the demands of playing a Division I sport. But it was great to be on campus in Philadelphia, with my best friends, who are also my football teammates. We’re a brotherhood, in the City of Brotherly Love. We’re constantly pushing and encouraging each other.

“The city of Philly’s nickname resonates with all of us.”

A son of Gus, a former swimmer at Southern Methodist  University in Texas, and Jennifer, a former prep swimmer and horseback rider, Bahr returned to Lake Forest on February 22 to quarantine for a couple of weeks. Part of the Bahr household became a makeshift gym, where Chase worked out often with his little brother, Brooks, a sophomore at Loyola Academy in Wilmette. The “little” in little brother needs an asterisk: Brooks is a 6-foot-5 ½, 245-pound defensive lineman for the perennially successful Ramblers. Consider Brooks little only if you consider the Atlantic Ocean a puddle.

“It upsets me that he’s taller than I am,” the big brother cracks.

Bahr and his Scouts teammates on Lake Forest High School’s football squad stood Willis-Tower tall after an unforgettable victory in the regular-season finale in 2018. Bahr served as a senior captain then. LFHS traveled to Lincolnshire and topped Stevenson 26-23 to clinch a state-playoff berth with its fifth win.

“Insane … that was insane,” Bahr says. “Mac Uihlein’s huge hit on their quarterback pumped up all of us. You don’t forget a moment like that, a win like that. I remember looking at our fans in the stands, at my friends in attendance, and seeing and hearing so much joy. Then, in our locker room, pure euphoria. We had come together. We showed everybody how dangerous we were as a team.”

Luke Hoggard sees Bahr and sees a lineman capable of inflicting steady harm in the trenches. A Penn sophomore linebacker from Huntington Beach, California, and good friend of Bahr, Hoggard has noticed that brawn is only one of Bahr’s strengths.

“Chase,” Hoggard says, “has such a high football IQ. He’s also one of the more agile linemen on our team, for sure. Strong, smart, athletic—you want that kind of combination in a lineman. He works hard in football, in school, in professional development. Chase does it all.

“And,” he adds, “he’s always doing the right thing, even when nobody’s watching.”

Bahr and Hoggard met up in Colorado last December for a couple of weeks of R & R and S (Skiing) & S (Snowboarding). Bahr’s grandparents live there.

“There’s more to him than snow activities away from the football field,” Hoggard says. “Sail boating is one of Chase’s hidden talents. He’s sociable, too, and a great storyteller. I think his lifelong dream is to be a philosopher someday, probably because that sounds cool to him.”

“If you’re looking for a guy who’s good at uniting people,” he says, “it’s Chase.” 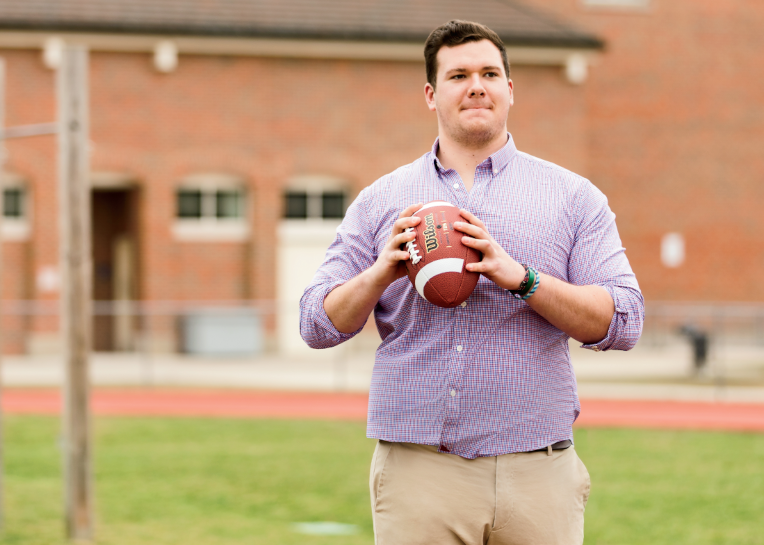