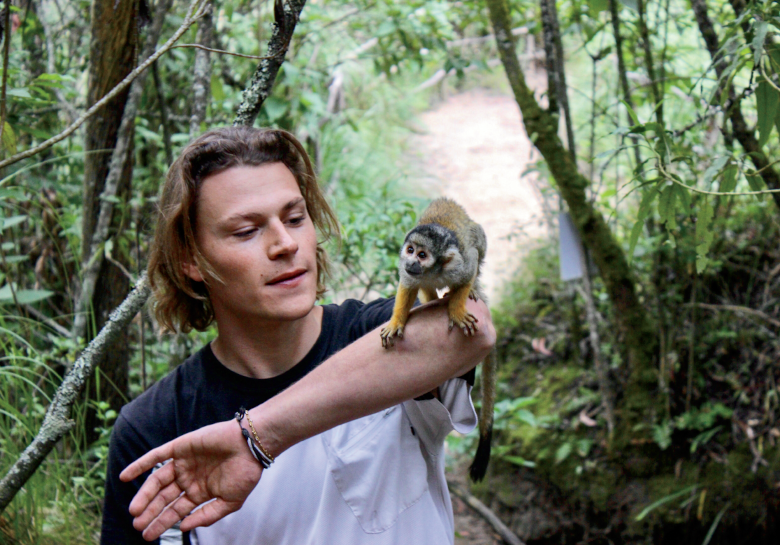 A wild squirrel-faced monkey hitches a brief ride on Crawford’s arm before heading back to the trees. Photography by Bill Hawthorne and Jorge Lopez-Perez

PETER CRAWFORD unleashes another infectious laugh in St. Petersburg, Florida, where the 2017 Lake Forest High School graduate is a senior at Eckerd College. A journalist calling from Illinois has just asked Crawford to discuss some of his hobbies.

“I’m on my bed, propped against a pillow,” Crawford, 22, begins. “The pillowcase is a raccoon pelt. I made the pillowcase. That’s one of my hobbies—making something useful out of roadkill. Want to know what’s hanging out on my balcony right now?”

“A river otter pelt is out there, drying out,” reveals the owner of a ball python named Buddy, the snake he received on his 11th birthday and a pet that could slither and hiss for another 25 years.

Welcome to Peter Crawford’s world, where life without animals might as well be life without oxygen. The very first word he uttered, even before “mama” or “papa”? It was “dog.” And he barked it three times while pointing a finger at a canine in Georgia.

“I’ve always loved animals, especially reptiles and amphibians,” Crawford, a biology major and environmental studies minor, says. “I can’t remember a time when I didn’t. When I was little I was into dinosaurs; loved them. Snakes interest me a lot now because there are so many different types, with a variety of color patterns.”

Born in Atlanta, the son of Bob and Anneliese Crawford moved to Lake Forest with his family when he was 7. Instant fascination gripped him when he entered the Wildlife Discovery Center—a living museum and biological station at historic Elawa Farm in Lake Forest—for the first time.

There to greet him was the center’s curator, Rob Carmichael. 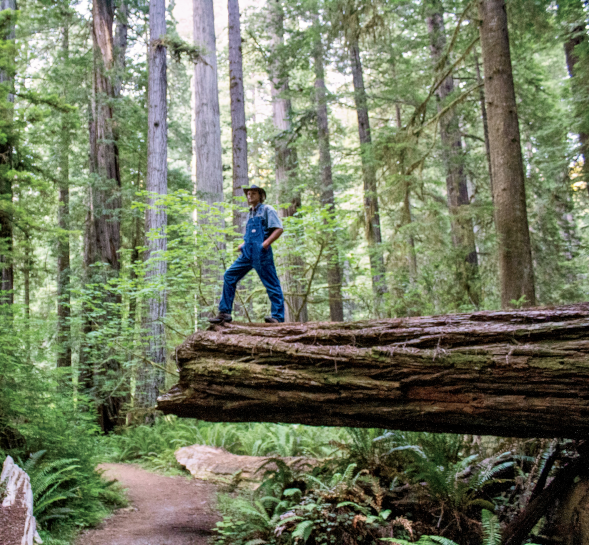 Crawford in the redwoods of Northern California during a road trip last summer. He spent 65 days camping in 26 states across the country with a friend.

That is essentially akin to a young technophile encountering Bill Gates.

“Peter is half Tarzan, half Steve Irwin (the late Australian zookeeper, television personality, and wildlife expert),” Carmichael says. “Peter has an insatiable curiosity about animals and nature. He would spend hours looking at an ant mound to study ants. Around snakes, any kind of snake, he’s comfortable; he even has a calming influence on them. I see Peter and I see a passionate person connected to wildlife and the environment.

But Peter used a camera phone to send a memorable video to his mother one day. The footage featured him swimming with … alligators. Anneliese’s initial gasp, unofficially, startled folks living in most of the contiguous United States.

“Mom worries about my interest in dangerous animals,” says Crawford, who, as a volunteer and employee at the Wildlife Discover Center, made time to compete for Lake Forest High’s swimming and diving program (he swam and dove, a rare double) in the winters and the school’s track and field program (pole vault and triple jump events) in the springs. “But she and my dad have always been supportive. I got my dad to pet a snake for the first time in his life in Alabama. And we had the greatest time backpacking together in Montana last September.”

Crawford’s trip to Australia in September 2019 was Discovery Channel-worthy. He and his friends were driving one day when they spotted a five-foot-plus coastal taipan, a venomous snake.

“We were in the middle of nowhere,” recalls Crawford, a Lake Forest Troop 46 Boy Scout, who built a heated alligator shelter at the Wildlife Discovery Center for his Eagle Scout project. “I was barefoot. The snake, it was riled up—coastal taipans are known for that. My friend grabbed the snake. Coastal taipans are also known for mock-charging at you. This one did that, and it got my blood pumping.” 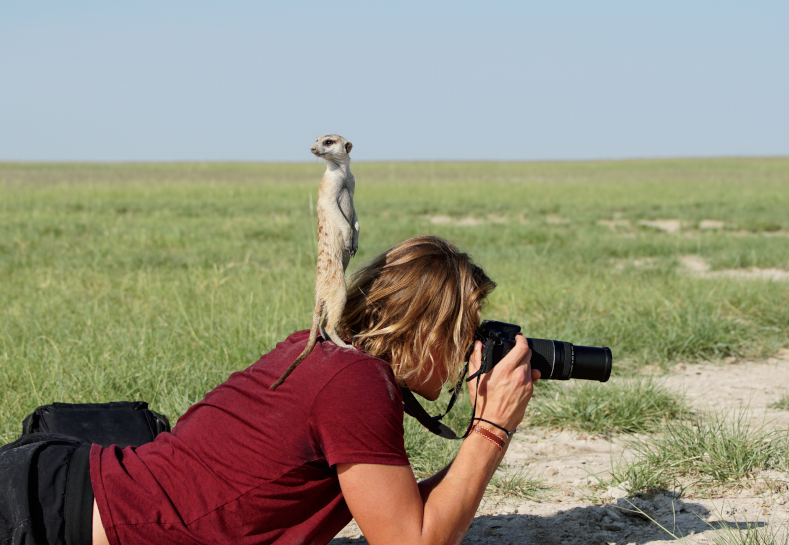 A meerkat in Botswana climbs aboard Crawford’s shoulder, gaining a better vantage point for predators. 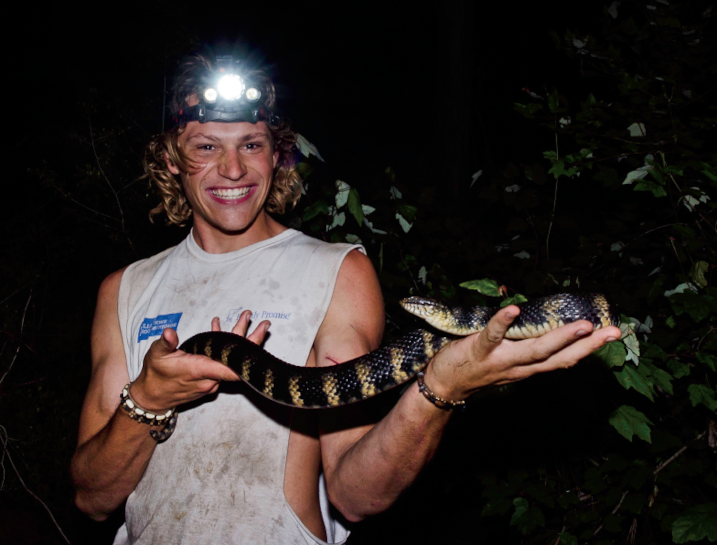 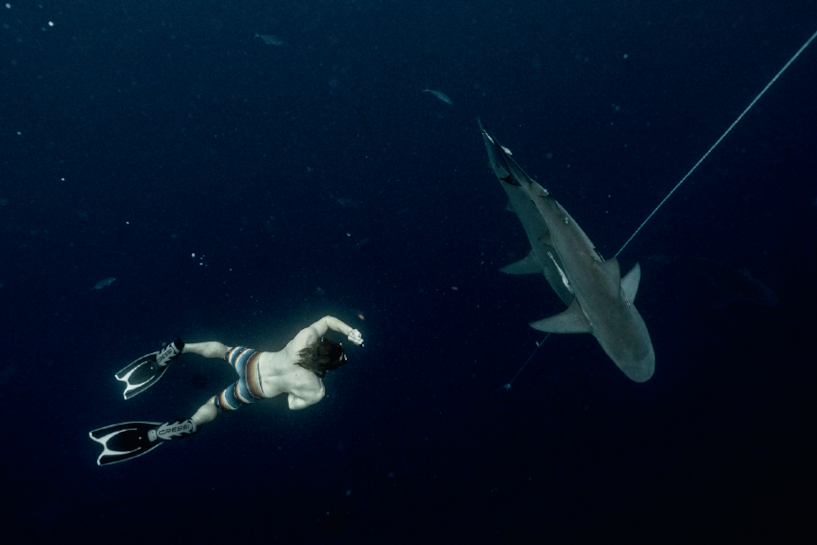 Crawford on a free dive off of the Florida coast, filming footage of bull sharks.

Crawford was sleeping outside in Australia one night when he heard something approach him. Awakened, he noticed an animal trampling through bushes off to the side. A kangaroo, he surmised, had hurdled Crawford’s head. Earlier in the trip—or maybe it was later—armies of ants traversed most of Crawford’s body in the middle of another slumber. Who needs a wake-up call when thousands of tiny legs are available?

Freediving, a form of underwater diving without scuba tanks? Count Crawford as a big fan of the activity, which requires the usage of unusually long fins. Crawford can hold his breath for three minutes, something that comes in handy when you are exploring underwater caves.

“I’ve gone on some crazy trips and made so many good friends in college,” Crawford says. “Eckerd has been an awesome experience. I’d like to work as a field technician after I graduate, getting projects like collecting data or setting traps, and then reporting back to scientists. I don’t mind doing the dirty work for others. After that? Who knows? Maybe a position with more leadership. Maybe graduate school.”

What is certain: Crawford’s appreciation for both the Wildlife Discovery Center and the incomparable guidance from Carmichael.

“Those were formative experiences, all of them, at the Wildlife Discovery Center,” Crawford, an animal keeper at the center, says. “I have been able to take care of animals, take classes, learn all about alligators and snakes and birds of prey, give tours, and work at summer camps.

“Rob Carmichael, he’s a total field guy and a big believer in hands-on learning,” Crawford adds. “I have learned so much by doing at the center. He’s knowledgeable, passionate, funny. Teaching the public about animals has always been important to Rob.”

“I also see him starring in a TV show someday,” Carmichael says. “He is such a likable, down-to-earth guy, with absolutely no ego. I like everything about his unique personality and angle on life.”