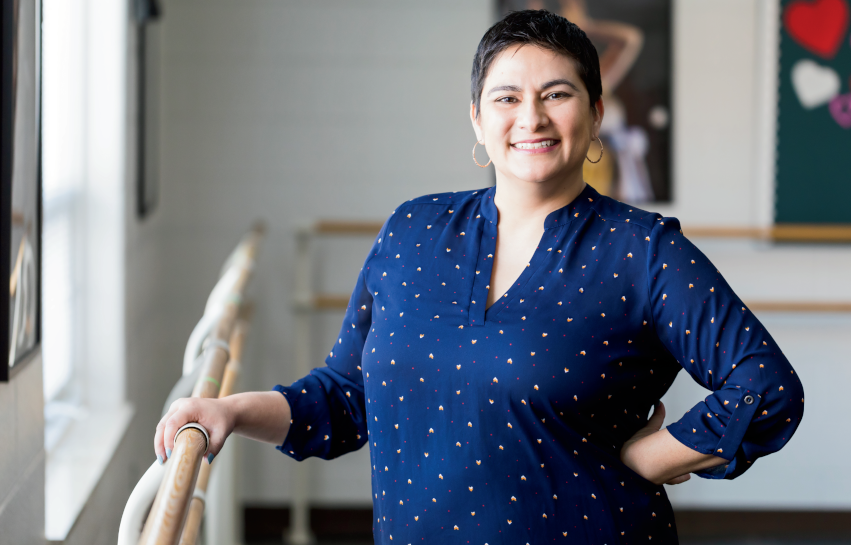 AN ASSIGNMENT in the second grade was an easy one for Valerie Gonzalez decades ago. Too easy. The task: take home a piece a paper and draw what you want to be when you grow up. Gonzalez wanted to be a professional dancer. She had been an avid student of the artistic form since the age of 4, having followed in older sister Veronica’s pointe shoe steps.

The then-7-year-old Valerie had used her family’s basement in Hammond, Indiana, as her personal studio when she wasn’t wearing out the couch cushions upstairs to perfect her handstand.

“I was riddled with anxiety,” Gonzalez, now 45 and in her fifth year as Lake Forest Dance Academy (LFDA) director at the Lake Forest Recreation Center, says of starting that assignment. “I’d feared I would make a mistake while drawing myself in a tutu. That’s all I had, that one piece of paper. Erasing something risked tearing the paper.”

It all worked out—the assignment, the professional goal realized—in the end for Gonzalez.

What she’s drawing these days? 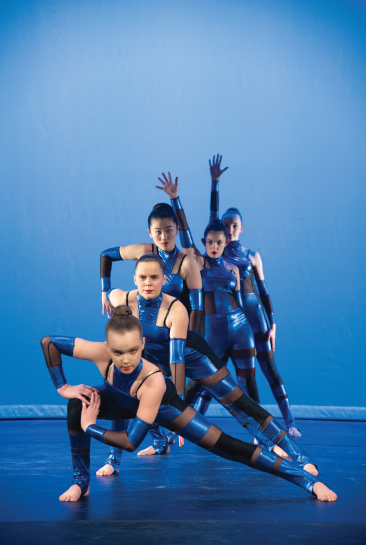 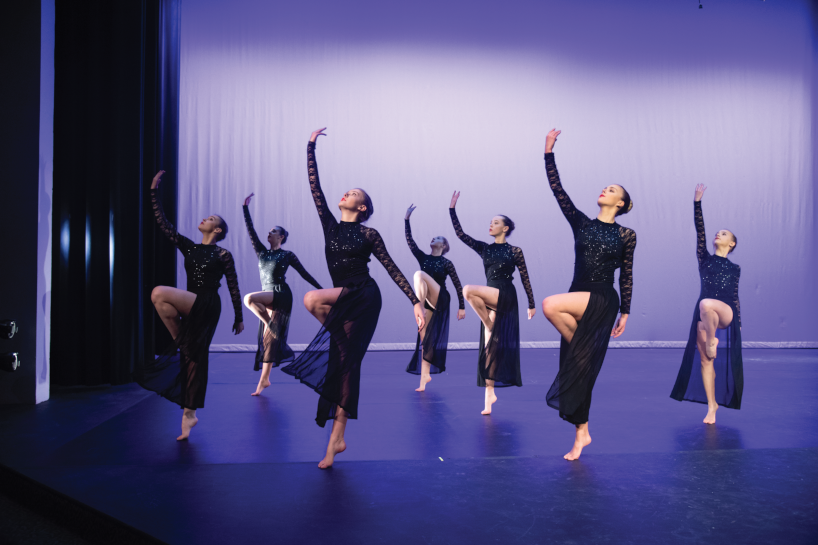 Rave reviews from her LFDA students, including Lake Forest High School junior Ellen Cha, an academy regular since taking a tap/ballet class at the age of 3.

“Miss Val is such a hard worker as a teacher who’s a classically trained dancer, and she cares so much about dance and her students,” Cha says of the Kenosha, Wisconsin, resident and newlywed wife of Lake Forest Recreation Center Athletics Manager Anthony Anaszewicz. “You’d have a hard time meeting someone with more passion for dancing than she has. She’s big on technique, always making sure we look good while dance correctly and safely.

Gonzalez earned her BA in dance at Western Michigan University and landed prestigious gigs—locally, nationally, and internationally—before whirling and leaping her way to an MFA in dance performance and choreography at New York University’s Tisch School of the Arts in 2006. Her first paying job in her chosen field was a role in the Chicago Symphony Orchestra’s annual holiday show. She was in her early 20s when she nailed an audition—for only four dancers and four singers— to perform in a six-week, USO-type Mediterranean Tour.

“I had no idea what I was going for when I auditioned for that tour in Turkey, Italy, and Spain,” admits Gonzalez, who is a certified Progressing Ballet Technique teacher and has performed with such notable companies as Gus Giordano Jazz Dance Chicago II (two stints) and Joel Hall Dancers. “Back then I was told, ‘Audition for everything that comes up, because you never know what you’ll get to do or where you’ll get to perform.’ That was a great experience, entertaining our country’s military personnel in Europe. We knew they had appreciated it because we had brought them a piece of their home.”

Shy and quiet as a first-day tumbling/tap student at an academy in Hammond, Gonzalez got hooked immediately and eventually found herself in front of smiling dance audiences at malls, nursing homes, and ladies’ luncheons. A young Valerie often executed dance moves for her mother, Noelia, in the kitchen at home, and nobody could miss the most excited audience member—Valerie’s father, Raymond—at any of her shows.

“I remember, at an early age, feeling joy and excitement each time I left the stage after a performance,” Gonzalez says. “Having energy you can’t contain, that’s the best. You should have seen me at home; I couldn’t stop flipping. I had feared, before discovering how much I loved to dance, that I wouldn’t find my place in the world. Training and taking weekly dance classes gave me structure, made me feel that I belonged. I needed that feeling.”

Young dancers yearn for that today, too, Gonzalez acknowledges. Especially now, when homes away from home are scarce destinations in the era of the pandemic.

“Our class sizes (in February, at the time of this interview) at Lake Forest Dance Academy have been limited,” says Gonzalez, who is in her 18th year at LFDA, the last nine as director and choreographer of its Prelude Dance Theatre, and specializes in jazz and contemporary. “We’ve pivoted and made adjustments. What hasn’t changed is the impact dancing, moving your body, can have on a person. We look at ‘pandemic’ teaching as an opportunity for students to focus on dancing as an outlet or a release.

“We consider a dance class a safe place to explore and learn about yourself. A dance teacher’s dream is a student majoring in dance in college. But the larger dream for us is watching dance students grow up and navigate the world, make decisions for themselves, and thrive no matter what they’re doing with their lives.”

Cha was performing with her LFDA troupe mates on a stage, during a competition, when a joyous person appeared in her peripheral vision. It was Valerie Gonzalez. The director’s smile? Stuck, on high beam.

“We had worked incredibly hard in studio to prepare, and what I’d found so rewarding was noticing how happy Miss Val was for all of us, how proud she was,” recalls Cha, who is thinking of pursuing dance in college. “That’s when I realized, yes, all that hard work paid off.”