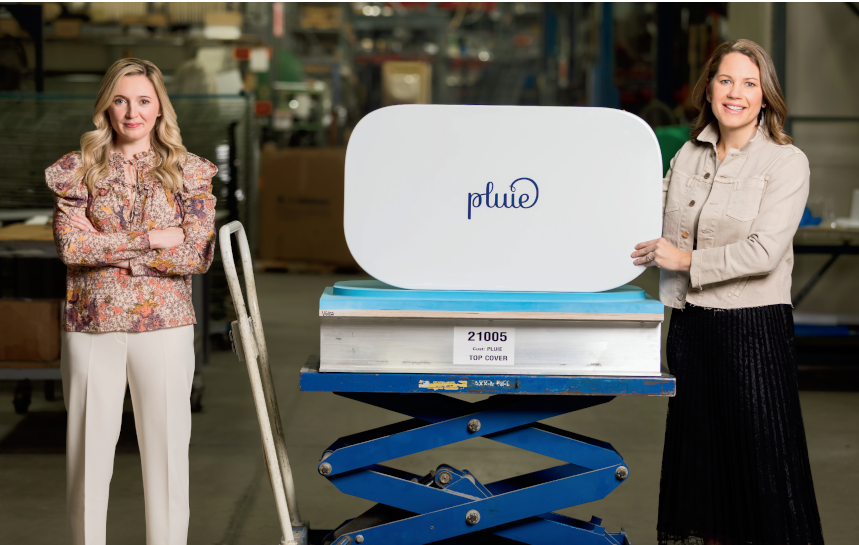 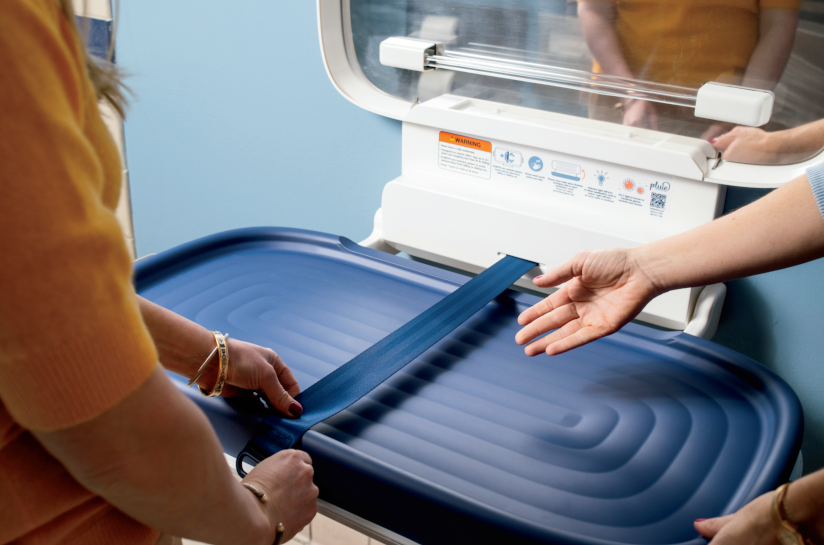 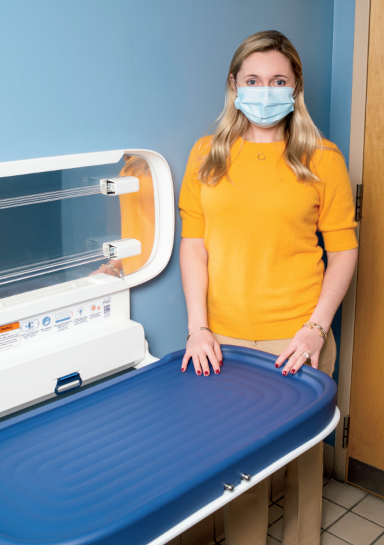 ADDIE GUNDRY has lived her life thinking outside of the box.

One day, she was having lunch with her husband Alex and their 1-year-old son Cooper. Before they left the restaurant, Cooper needed a diaper change. As is all too common, there was no changing station in the men’s room and the task was left to Gundry.

As she changed Cooper, she noticed how cumbersome the space was: there was no place to hang her diaper bag, the changing table was incredibly dirty, and its surface was cold, hard, and uncomfortable for the baby. As she walked out of the restroom to meet her husband, she knew there had to be a better way for changing babies in a public space. Before she fell asleep that night, she had an idea. What if there was a more modern and user-friendly changing table that cleaned itself?

Problem-solving isn’t something new for Gundry— she has made a career of it. After earning her culinary degree, she spent years in culinary design developing food products for some of the world’s largest brands. Her successes landed her in multiple television appearances on The Food Network.

“It’s kind of crazy thinking backing to 2019,” she says. “I’d be working in a test kitchen all day, and then I’d come home and work on these ideas I had for a changing table at night. I was obsessed with every detail for this product I called ‘Pluie,’ which means rain in French.” It was not long before she filed for a patent for her dream idea.

In the meantime, Gundry became pregnant with her second child Claire. “The hardest part of designing this product was essentially working alone without the experience needed for such a complicated, highly engineered product,” Gundry says. “I was used to working with a team of people who would take my ideas and run with them. Now it was just my husband and me trying to figure this out.”

While on her 10-week maternity leave with Claire, Gundry spent the baby’s nap times raising venture capital, no small feat with a new baby in tow. But she did it.

Once she secured funding, Gundry knew the first step was finding a partner who was just as eager to bring Pluie to life and launch nationwide.

“One day I was dropping Cooper and Claire off at day care and a friend who knew I was working on this product launch suggested I meet Brittany Hizer,” Gundry says. “They said she was this amazing person who was itching to start her own business after leaving the corporate world—she was just looking for the right thing.”

So in January 2020, Gundry and Hizer met for coffee. What should have been a one-hour “get-to-know-you” meeting turned into a five-hour lunch. Hizer’s 15 years in product development was just what Gundry needed. 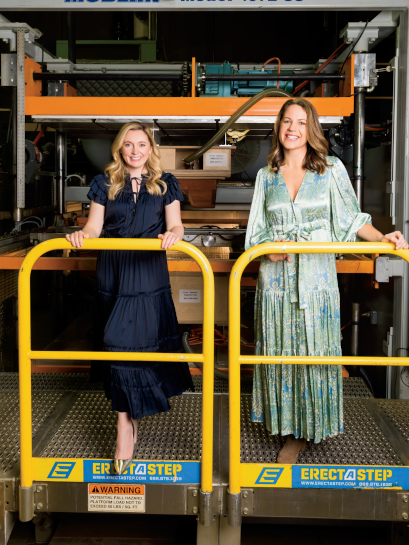 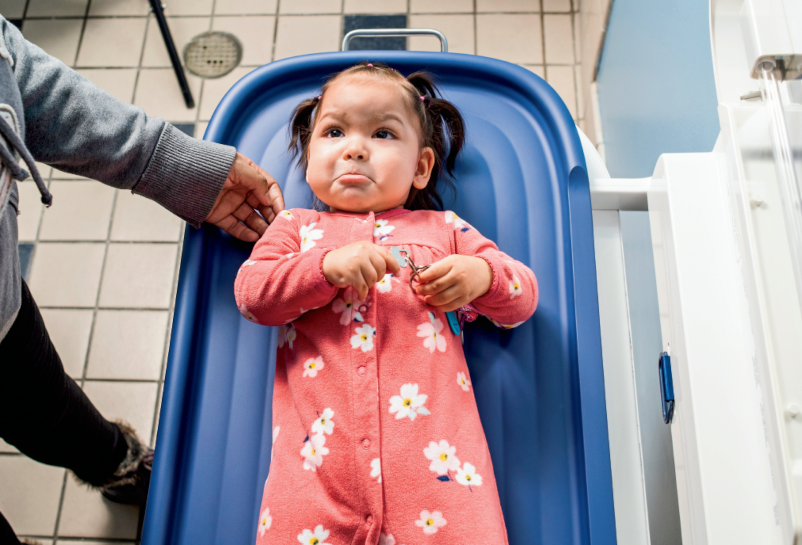 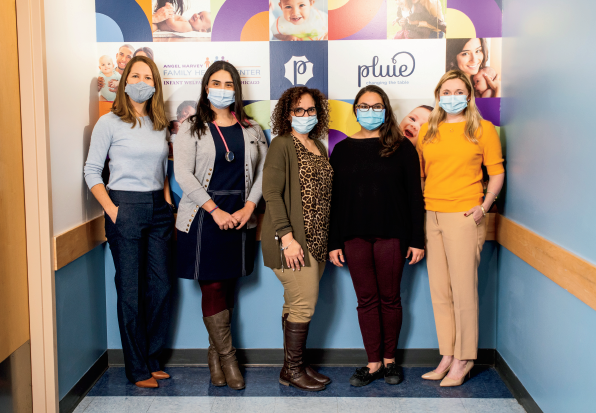 “I knew she was my perfect partner and new cofounder,” says Gundry. “It takes a special person who is willing to take the same amount of risk you are— and that was Brittany.”

And Gundry’s enthusiasm and confidence in Pluie was contagious.

“I fell in love with the idea behind Pluie and solving a decades-old problem, especially as a mom myself,” says Hizer. “I also couldn’t get over Addie’s passion and her amazing sense of drive. She knew at her core that Pluie could be anywhere, so I decided to dive in head first—why not? Addie needed help bringing Pluie to life and that’s where my experience came in.”

Before they parted from that first coffee, the duo took a bathroom selfie next to a grungy changing table, not knowing it would be months before they would be together in person again.

Pluie continued to evolve over endless text chats and Zoom calls as Gundry and Hizer navigated a new business during the pandemic. The result: the world’s first self-sanitizing and most advanced public diaper changing table with a UV-C light system (placed behind a protection panel) that sanitizes the changing space when closed and not in use. UV-C light is known to kill 99.9% of germs, bacteria, and viruses through a photochemical reaction that damages their DNA. Pluie’s signature table, proudly made in the USA, also includes first-to-market features such as a plush, leak-proof cushion, a retractable security strap, and multipurpose durable handles—all of the things Gundry wished for that day she struggled to change Cooper and came up with the idea for Pluie.

Pluie received its patent earlier this year, and is now being installed in bathrooms across the country, the first of which was at the Angel Harvey Family Health Center of the Infant Welfare of Chicago—an organization near and dear to Gundry.

“This was an important install for many reasons,” Gundry explains of the center that remained open during the pandemic’s shutdown. “It communicates to Angel Harvey’s families that this center is a safe place to bring your baby, that it doesn’t discriminate, that all families are welcome.”

Additionally, for every Pluie table Gundry and Hizer sell, they are donating diapers to Angel Harvey. It supports their company’s message that everyone deserves a clean place to be changed and a clean bottom, too.

Success will have many definitions to Gundry and Hizer as Pluie tables continue to be installed in public restrooms around the world. But to Gundry, there is one point of measurement she hopes for more than most.

“Success to me is making my kids proud,” she says, “that they will one day look at a Pluie table and think, ‘wow, Mom built that.’ What Brittany and I are doing is incredibly hard. I can’t wait for my kids to one day understand this and be proud of what we did.”