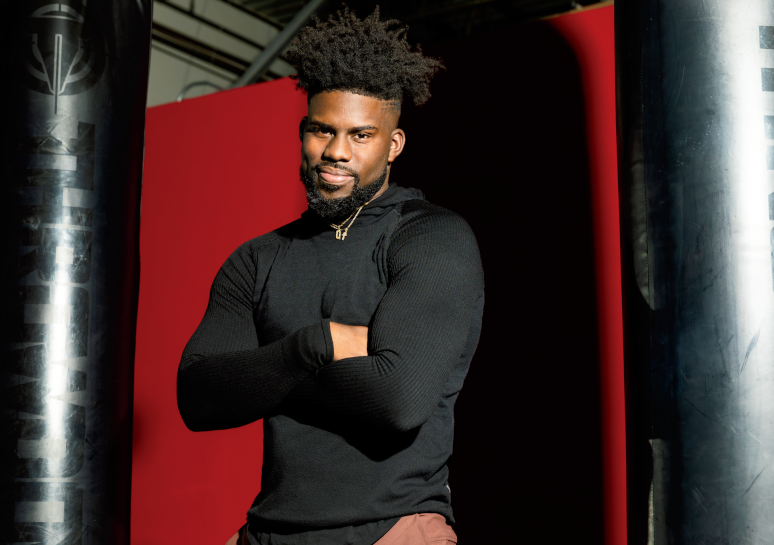 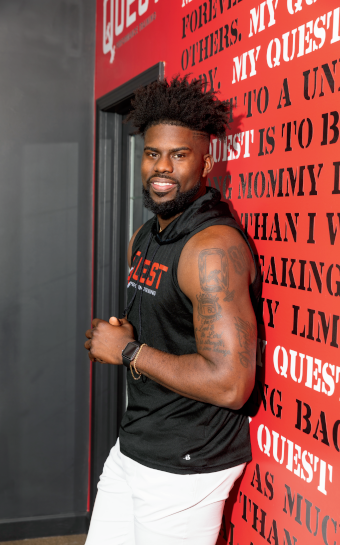 FOR ANYONE who follows Mar’quone Edmonds on Instagram, he is likely to be the first post you see in your feed when you wake up in the morning. Because while the rest of us are squeaking out those last few minutes of beauty sleep, he is hitting the gym before his first clients arrive for their 5 a.m. workouts.

“I’ve never been a great sleeper,” says the larger-thanlife, former football player turned personal trainer who owns Quest Performance Training in Lake Bluff. “If I start to toss and turn and can’t fall back to sleep in five minutes, I’m up.”

Early mornings were something that started for Edmonds when he was a child growing up in Waukegan. His father was a deacon at the local church, his mother was involved with many of the church’s ministries, and he had one brother—just 10 months older, who ignited a fire in him to want to be the best.

“My older brother was good at everything,” Edmonds says. “He was the quarterback for the football team, homecoming king, prom king, and all of the girls thought he was pretty cool. I was just his younger brother.”

So when Edmonds was a freshman in high school, he would wake his father up at 5 a.m. to take him to the gym.

“I knew if I was working out, I’d have a chance at making a name for myself like my brother did.”

It paid off. Edmonds was heavily recruited to play college football, ultimately shaking hands with 28 NFL recruiters before he decided to play in Germany after graduating.

Knowing football wasn’t going to be his life forever, Edmonds joined the charismatic team that opened Orangetheory in Lake Forest in 2015. It was here that he first felt the pangs of being called to be a coach.

“That’s when my life really changed,” says Edmonds. “After five years with them, I got to a point where I knew it was time to do my own thing,” he says. “One of the Orangetheory trainers I worked with was Anthony Campo. His passion for coaching was contagious and I knew that coaching was the best thing for me. It was the only thing I ever worked harder at than football.” In 2019, with some seed money from his former college roommate Tim—a police officer in Park Ridge who was injured while on duty responding to a burglary—Edmonds opened Quest Performance Training.

It was not long before Edmonds—or “Coach Q” to most—reached household-name status. That is why when COVID-19 hit and he was forced to close his newly opened gym Edmonds really got to work.

“There’s a quote I heard a long time ago about how with big issues come big innovations,” he says. “I was able to sit, observe, and come up with a plan to overcome this situation.”

Edmonds recruited his friend and videographer to spend a day with him recording a week’s worth of exercises. In no time after making them available, 20 people purchased the workouts.

“I knew I was on to something,” he says. “People wanted to keep going. Each week, I released new workouts and then I realized people were going to need equipment, so I started renting out different pieces from the gym. New week, new exercises, new equipment.” 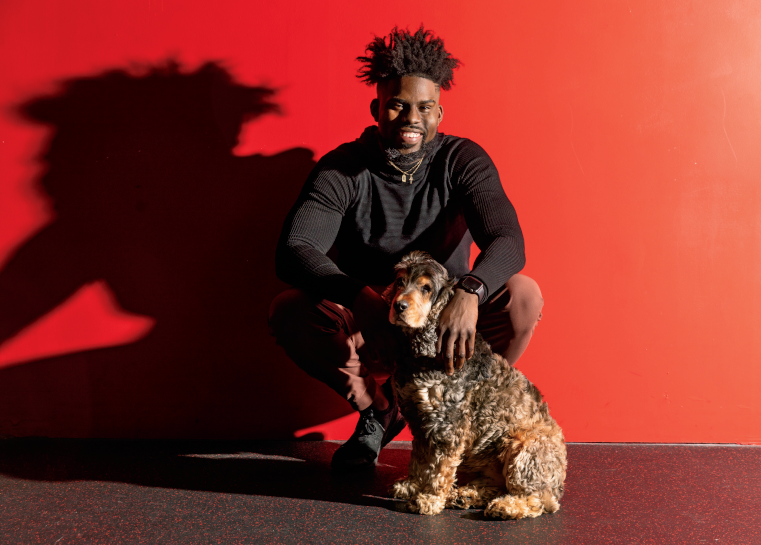 Edmonds with his adopted dog and constant companion, Boomer.

Then, as the weather improved, fitness studios were told they could hold classes outdoors. Edmonds was fortunate to receive permission from Lake Forest Academy to use their fields. Soon, he was leading five classes of 20 people per day.

“And from there it just kept going,” he says. “We were finally allowed to have classes again indoors and I knew I needed more space.” And with the larger gym came the addition of two new coaches, Courtney Johnson and Danny Gomez.

Part of the reason Edmonds moved Quest to its current larger location was his desire to coach the youth.

“I couldn’t stop thinking about the high school kids,” he says, “what it must have been like for these young athletes to all of the sudden have their seasons canceled. Quest became their sanctuary. And then the little kids— our mini questors—they came next. They maybe needed
this space the most.”

Even though the move to a larger gym was not supposed to happen for another year according to the goaldriven Edmonds, he knows it is part of a bigger plan that the universe has for him.

“I’ve never been one to put my spirituality on to other people, but God is a huge part of my life,” he says. “I chose the name ‘Quest’ for my gym instead of ‘journey’ because the word ‘quest,’ in its definition, says there’s an end goal. There’s a purpose to what we do. I believe that’s why I’m here—to help as many people as I can to be the best they can be. I’m so grateful every day that I get to do this.”

Best advice you’ve been given? “Control what you can control, but remember you can only control so much.”

What does Quest look like in 5 years? Slightly bigger space, another coach or two, on-site daycare, and my fiancé Abbey working alongside me with her own office to see her physical therapy clients.