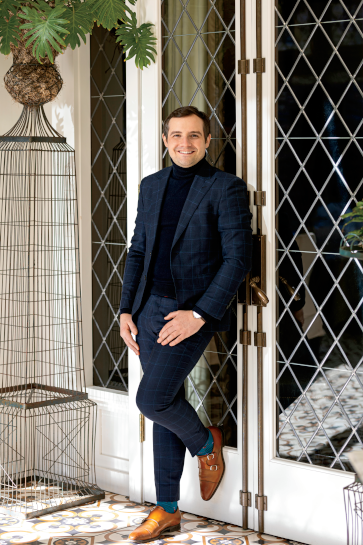 WHEN WORD was shared late last year, that Matt Barba—The Deer Path Inn’s general manager who had led the Inn’s staff through a multi-million dollar renovation as well as the challenges that COVID-19 presented— was leaving the Inn to take a new leadership role at its parent company, it left many wondering—who could fill his shoes?

But on January 1, there was a peaceful transition of power at the Deer Path Inn when Parisian-born Patrick Lacassagne took the reins.

“The Deer Path Inn is a beautiful, magical property,” says the incredibly charming Lacassagne. “I couldn’t believe my eyes that such a place existed outside of the city.”

Lacassagne always knew he wanted to be part of the hospitality world—studying the food and beverage side of the business at the Jean Drouant Hospitality Management School in Paris.

“I actually thought I wanted to become a chef,” he remembers. “But the further I progressed in my studies, the more I was drawn to the hospitality side and the guest experience. I liked that the hotel world could offer me all of this.”

Lacassagne’s hotelier career has taken him all over the world—from Europe to the Middle East to the United States. He has worked for companies like Relais & Chateau, Sofitel, Waldorf Astoria, and Highgate. His most recent assignment was as the acting general manager for the Knickerbocker Hotel in New York City.

“The last big event I helped oversee at the Knickerbocker was our New Year’s Eve party to ring in 2020,” he says. “We were right on Times Square, watching the ball drop. Who knew all that was to come in the new year?”

When the hospitality industry took a devastating blow with the onset of COVID-19, Lacassagne and his fiancée found themselves at a crossroads wondering where they might go next.

“Chicago has always been my favorite city in the USA,” he says, thinking back on his years with Chicago’s Waldorf Astoria that he helped reopen after its renovation. “It’s a mix of Paris, New York City, and Washington D.C. You get the best of all. The busyness of a city center like Manhattan. As clean as Washington D.C. And as wild as Paris.”

Through his network of hotel colleagues, Lacassagne was introduced to Barba, who invited him to come and visit The Deer Path Inn.

“The Deer Path Inn is such a unique place,” he says. 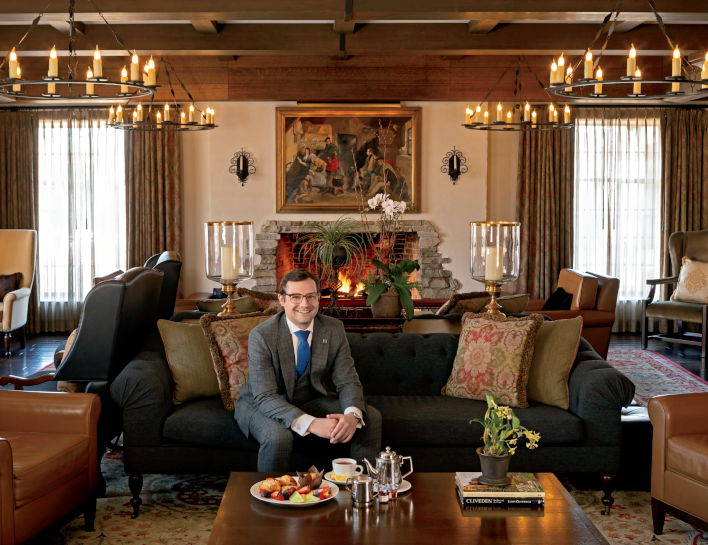 Lacassagne in the Hearth Room.

“I lived in Chicago for two years and never heard of it. When my car pulled up outside of the inn, I had no idea of what to expect. But the minute I walked in, I felt the warmth. The architecture, design, and atmosphere were also just amazing. There are no two rooms that are the same. If you go from corridor to corridor, there is always something different. And then to know that a number of the staff—some of the most
genuine people I have ever been lucky enough to meet— have been here for 20 or 30 years—there’s nothing like that anywhere else in the world.”

Lacassagne and Barba hit it off quickly, as Barba shared stories of how the inn has evolved since it was renovated, how they have engaged with the community since the shutdown began, and what Lake Forest and the surrounding suburbs mean to the Deer Path.

“Meeting with Matt was such a discovery for me,” Lacassagne adds. “The Deer Path Inn doesn’t need the rest of the world to work. It’s a stand-alone property that is supported by the surrounding community and protected by it.” Lacassagne was in awe of how the proactive the Deer Path Inn was with its resources in 2020. In his career, he has never seen a hotel’s carryout business as strong as the Deer Path Inn’s was.

“I loved how Matt used Instagram to connect with the outside world and to talk about our incredible staff,” he says. At press time, the Deer Path Inn had just surpassed 10,000 followers on the platform. “Instagram is such a powerful tool and Matt was so gifted in how he used it,” says Lacassagne. “On New Year’s Eve, they posted a photo of a special New Year’s cocktail. I learned on my first day here that from that post, we sold more than 200 of them. Incredible.”

The new innkeeper says it has been advantageous to transition into his role at a time when the hotel and restaurants aren’t at full capacity. It has given him time to take in all that the team has created, understand and know his staff, and up his Instagram game.

But in a world where timing is everything, Lacassagne believes he is absolutely where he is supposed to be, looking forward to building on the strong foundation that was left for him.

“I’m a city person,” he says. “But where I am right now in my life, I like Lake Forest a lot. It’s a diamond near Chicago that needs to be talked about more. Matt’s advice to me before he left was to just be myself, engage with the community, and learn what DPI is all about. the Deer Path Inn is not like any hotel you’ve ever worked for. He was absolutely right.”

To learn more about the Deer Path Inn, visit thedeerpathinn.com.