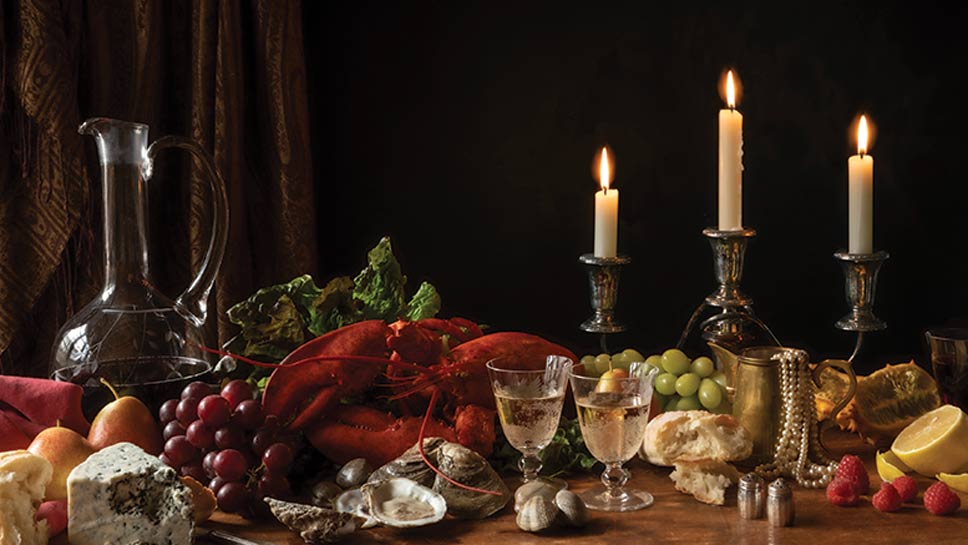 SUMPTUOUS displays of earthly delights were the subject of Dutch still life paintings in the second half of the 17th century. Oysters—considered to hold aphrodisiacal properties—were often depicted, as were half-peeled lemons, which connoted social status and allowed the artists to show off painting prowess. The presence of silk and precious seasonings like salt and pepper represented far-flung luxuries flowing into Dutch ports, and the placement of cheese showed pride in Dutch agriculture. Jewels, silver, and venetian glass vessels holding wine were quintessential symbols of luxury as were lush fruits and lobster, which could not be fished off the Dutch coast.

Many of the objects displayed in 17th century still life paintings— and in the photograph above—hold the same connotations in today’s world. Sumptuous, silky, and aphrodisiacal … what more could one want out of Valentine’s Day?

The hidden beauty in this suggested celebration lies in the absolute lack of cooking required:

STEP ONE. Call Burhops. Order a pre-steamed two-pound lobster that easily serves two (it will set you back a pretty guilder, but nothing kills the mood faster than crustacean murder), and a dozen oysters. Next, stop at the market to pick up good champagne, a fresh baguette, and nibbles—including his or her favorite cheeses and chocolates.

STEP TWO. Pop into a local jeweler for pearls or cufflinks. It can’t hurt.

STEP FOUR. Pour yourself drink and set a beautiful table while listening to the playlist you’ve curated for the evening.

STEP THREE. Cut a lemon into small wedges for the oyster platter. Shuck the oysters no more than two hours before serving. Place with their shells rounded-side down on a platter filled with crushed ice, preventing them from spilling their delicious briny liquor. Cover and chill until ready to eat.

STEP FOUR. Lay out the non-perishable elements of your Dutch still-life inspired side table, if desired. A stunning, pre-ordered floral arrangement for the dining table (no last-minute grocery store flowers allowed) is a suitable replacement.

STEP FIVE. Preheat the oven to 350 degrees. Wrap the pre-steamed lobster in foil with four pats of salted butter and place on a baking sheet. Set aside while you slip upstairs and put on something fabulous.

STEP SIX. Pop lobster into the pre-heated oven until heated through—about 20 to 30 minutes. Pour melted butter from the foil into a bowl for dipping. Keep warm.

STEP SEVEN. Plate the nibbles. Pour the champagne. Set out the oysters. Restart the playlist while your significant other tears apart the lobster for the two of you to enjoy … it is time to relax and enjoy the (17th century-inspired) fruits of your labor.