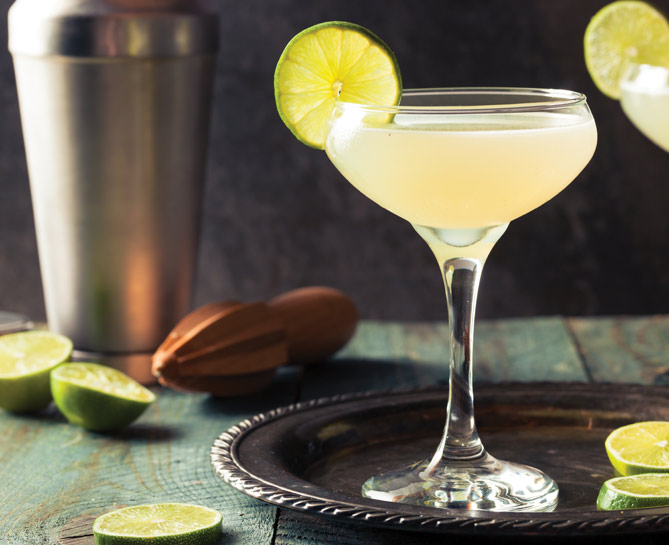 THE DAIQUIRI resides in the same family as the most classic of cocktails: The Martini, the Manhattan, the Sazarac, and the Old Fashioned. Its history is over 100 years old, originating in pre-Prohibition and Prohibition era Cuba when the country was open for tourism and its nightlife thrived. The Tropicana Club with its “Las Diosas de Carne” (translation—Goddesses of the Flesh), burlesque dancers, the Buena Vista Social Club (from the popular Artisan Entertainment documentary), and the New Year’s scene from the Godfather II all reflect the environment that conceived the Daiquiri.

The drink was created by Jennings Cox, an American engineer who managed the Cuban properties for two American companies (credit as co-creator is also often given to a Cuban engineer named Pagliuchi). With important guests on the way and finding himself without a source for gin—the genteel spirit at the time—Cox worried that they would not find the local tipple palatable if served neat. He added lime juice and sugar to the island’s pure cane rum, and a classic was born.

It is believed to have been the favorite cocktail of Ernest Hemingway and Jack Kennedy (ironic considering he is responsible for severing diplomatic ties with Cuba in ‘61 … perhaps Bay of Pigs was intended to oust Castro in an effort to save his beloved cocktail? But I digress). Ultimately, it was the United States Navy—specifically Admiral Lucius Johnson—that brought the cocktail to the mainland via the lounge at the Army and Navy Club (of which I am a proud member). Located on Connecticut Avenue NW in Washington, D.C., active and retired officers can still host happy hours in the lounge, which is now named for the cocktail.

Now that we’ve covered the historical commentary and, hopefully, established the Daiquiri’s historical bona fides—let us move on to the technical aspects of mixing this cocktail. The Daiquiri, like any great cocktail, consists of a base and a modifier. In this case, the base is light rum and the modifier is citrus (lime juice) and sweetener (simple syrup). The purpose of the modifier is not to mask the base liquor but, rather, to enhance its flavors on the palate. The base liquor is always the main event. Never use premixed sweet and sour mix unless you are looking to have a substandard cocktail with 5 times the calories!