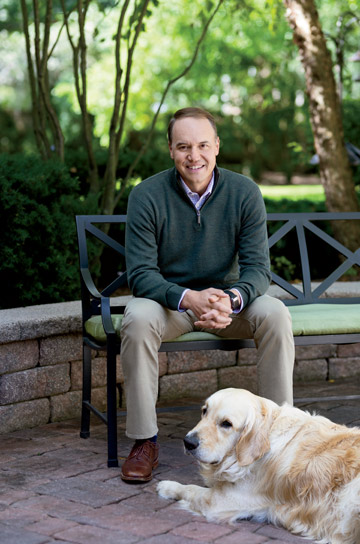 Philanthropist Jamie Wildman is honored to serve as the new Board Chair of the American Red Cross of Greater Chicago. Photography by Monica Kass Rogers / Styling by Theresa DeMaria

WALTER WILDMAN drove an American Red Cross ambulance in France during World War I. He was a Quaker. Quakers are to wars what trees are to loggers.

They stand in opposition.

“But he wanted to serve his country,” says Walter’s grandson Jamie Wildman. “So that’s what he did.”

Jamie Wildman, of Lake Forest, began serving his two-year term as board chair of the American Red Cross of Greater Chicago in late June. The chapter serves 7.7 million people in five counties. The 45-year-old—a partner and managing director at William Blair & Co., and father of two daughters, with wife Kristin—had been a board member of the largest American Red Cross of Illinois chapter for eight years before succeeding Theodore Dysart as chair.

“Former board member Jim Farrell [also of Lake Forest] invited me to the Red Cross’s biggest fundraiser, Heroes Breakfast, years ago,” Wildman recalls. “Afterward he said to me, ‘How could you not get behind an organization like this? It comes to the aid of people in times of their greatest need.’ ”

Ninety percent of the American Red Cross workforce is made up of volunteers, and 90 cents of every dollar it spends is invested in delivering care and comfort directly to those in need.

“I’m proudest of that, of only 10 percent of our funds designated to cover administrative costs,” Wildman says. “Not many organizations can make such a claim. Our funds provide clothing and shelter after fires and other disasters. Our ‘Sound the Alarm. Save a Life’ program installs free home smoke detectors. Donating blood is a great way to get involved with the Red Cross. It’s also the simplest.”

An Ohio native, like his wife, Wildman attended North High School in Springfield and worked summers at a local factory from the ages 16-18. He toiled with a man who pressed two buttons eight hours a day, five days a week, securing sponge mops to handles.

“I then boxed the sponge mops,” says Wildman, who also served tennis balls to deuce- and advantage-side boxes on courts for North High’s varsity squads. “That was an eye-opening experience, spending all those hours in a warehouse. The man in charge of pressing buttons and I had great chats every day. He was making minimum wage, not looking for a promotion. He seemed content.

“Some of the happiest people I met back then were assembly-line workers.”

Wildman, armed with a potent work ethic, graduated with a degree in economics at Vanderbilt University and earned his MBA at the University of Chicago Booth School of Business. He has been living in the Chicago area since 1999, except for a year in New York. He started his tenure with William Blair, the global investment banking asset management firm, 16 years ago.

“What I’ve always loved about Chicago is how its civic and business communities are intertwined,” Wildman says. “People here really care about organizations. People are truly passionate and want to make a difference.”

Nurse Clara Barton formed the American Red Cross in 1881. Its mission is to prevent and alleviate human suffering in the face of emergencies by mobilizing the power of volunteers and the generosity of donors. September 2020 was a particularly busy month for Red Cross volunteers nationwide, with wildfires and hurricanes raging. The pandemic exacerbated the disasters.

A sampling of recent honorees: a youngster who had jumped onto L tracks to rescue an adult who had fallen; a trained paramedic/ phone operator who had fielded a call from a panic-stricken woman and instructed her to administer life-saving CPR to her sister; and Lake Bluff-based Bernie’s Book Bank Founder and Chief Advancement Officer Brian Floriani, the 2017 Community Impact Award recipient. “It’s a moving event every year, our Heroes Breakfast,” Wildman says. “It’s wonderful. Unfortunately this year’s Breakfast had to be a virtual one because of the pandemic. You can’t help but get inspired while listening to what each Red Cross hero did the previous year, no matter the format. Our Youth Award one year went to a kid who arranged the deliveries of stuffed animals to kids.”

Philanthropically driven throughout his life, Wildman is the immediate past Chair of Bernie’s Book Bank’s Board of Directors. He serves on the Northwestern Medicine Lake Forest Hospital philanthropic advisory council and the men’s golf pro-am committee for the Ann & Robert H. Lurie Children’s Memorial Hospital. And he is a former treasurer and board member of the Gorton Community Center in Lake Forest. In his precious free time, Wildman golfs, skis, and bikes, and never turns down an opportunity to play a racket sport. If he could change one thing about his tennis game, it would be his serve.

He is also enjoying the challenges and rewards of his new position at American Red Cross-Greater Chicago.

“I’m a big believer that people who feel blessed have a responsibility to serve others,” Wildman says. “I hope to do just that, to leverage the skills I have to make a positive impact.”

For more information about the American Red Cross of Greater Chicago, or to make a donation, visit redcross.org.