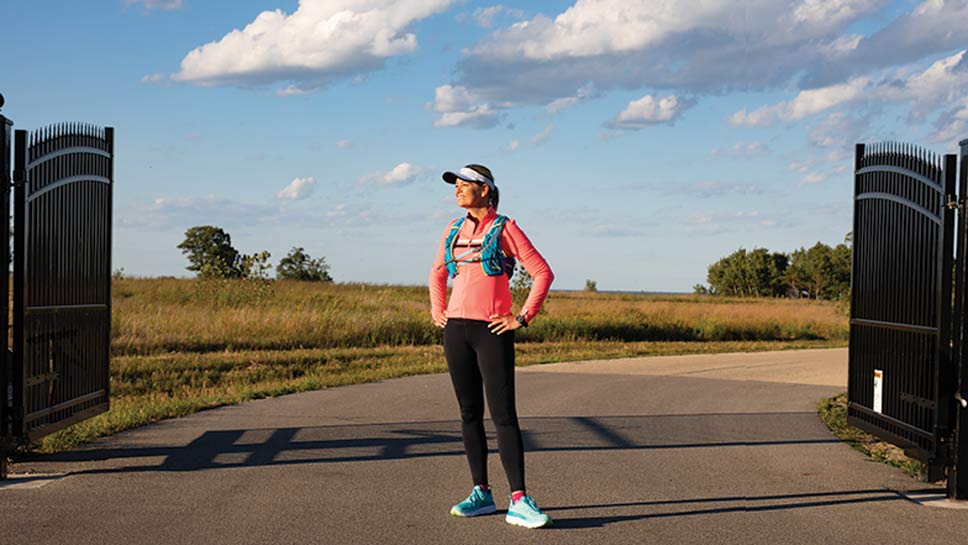 Loacker takes in the trail ahead. Photography by Robin Subar

TWO YEARS AGO, Erich Loacker’s knee-jerk reaction to his wife’s seemingly audacious goal came from his mouth. He laughed. The exchange took place in their Lake Forest kitchen.

“My husband thought I was kidding,” Courtney Loacker says.

She was not. Loacker—a 1996 Lake Forest High School graduate and mother of son Corbet, 11, and daughter Mikaela, 7—had announced to Erich her intention to run a 50-mile ultramarathon in downstate Vienna in late 2018. Imagine tying the sneakers tightly near a welcome mat in Lake Forest and then pounding pavement all the way to Naperville.

The same goal-setter, remarkably, had never attempted to race in a regular marathon (26.2 miles) at the time of her startling in-house proclamation, and Loacker chose to play defense for LFHS lacrosse teams decades ago “because I had no desire to run up and down the field for an entire game.”

And in 2017, months before Erich’s chortle near the fridge, she lined up for her very first 5K run—a Down Syndrome Awareness event in Milwaukee—to support a relative with the chromosomal condition.

“Hated every minute of it,” admits the 42-year-old Loacker, vice president and senior relationship manager at Bank of America. “I was out of breath, practically the whole time. But I wanted to do it for my family member and because I was incredibly out of shape. I remember returning home and running around the block the next day, determined to stick with my goal. I ended up getting the running bug.

“Goal-setting,” she adds, “is extremely important to me. I don’t just set goals in athletics. Last year I wanted to live more in the present moment; I didn’t want to think so much about work when I wasn’t working. That was tough, too.”

But back to November 2018 and Loacker’s 50-mile Labor of Ugh. She did it, clocking the grueling test in 11 hours, 11 minutes, and 21 seconds, not all of it in daylight, and finishing in the top quarter among female entrants.

Erich witnessed the feet feat in Johnson County. So did their children and her parents, Bud and Judi. One of her kids held up and flapped a poster board with the message YOU’RE RUNNING BETTER THAN THE GOVERNMENT (It was an election year). A bursting-with-pride Bud, a former U.S. Navy Corpsman attached to the Marines, hugged his spent daughter afterward and told her about servicemen who had to tackle 50-mile training hikes. Some had not made it.

Each of Erich’s eyes afterward? Home to a puddle of happy teardrops.

You are not going to believe what Loacker plans to do in mid-November, in her return to the Tunnel Hill State Trail in Vienna. Then again, given her reservoir of resolve, you probably will. A ski instructor at Highland Park-based Snowflake Club, Loacker plans to ditch her poles and goggles and plow even terrain in a 100-mile run. Yes, 100 miles this time, or the approximate distance between Chicago and Benton Harbor, Michigan. A finishing time between 26-28 hours would please her. Any result faster than 24 hours would give her an excuse to take at least two victory laps around the Land of Lincoln.

“I’m cross-training more this year than I did while training for the 50-mile two years ago,” says Loacker, who, in addition to playing lax at LFHS, collected two varsity letters in volleyball and another in cheerleading. “I’m running, walking, biking. You’re asking for a broken body if you run only, though running, for me, is a meditative experience. But those first five miles, training or in a race, are brutal. After five miles, the runner’s high kicks in and I feel I could run forever.” 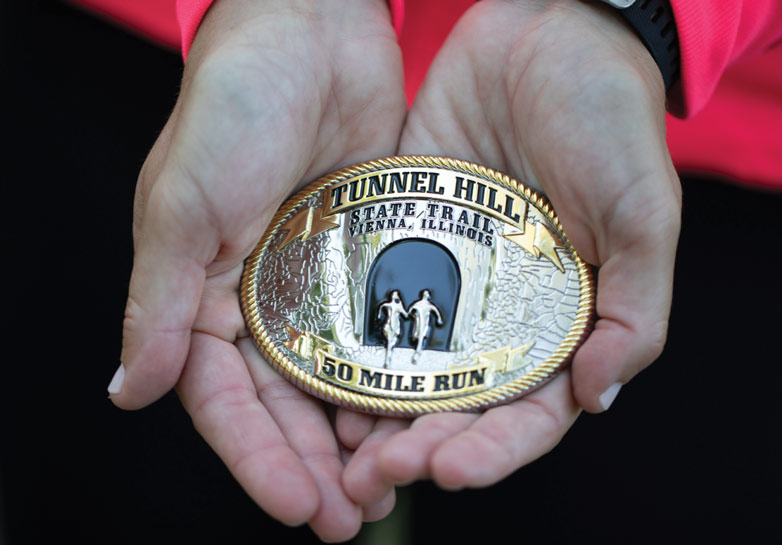 Courtney and Erich, a Highland Park native and Deerfield High School graduate, first met on a sand volleyball court in Highland Park as teammates in a 3-on-3 pick-up match. Love at first … spike. It was the summer before her senior year in high school and his freshman year at the University of Illinois at Urbana- Champaign. They bowled in Vernon Hills on their first official date and later wore significantly nicer clothes and shoes on the night of Courtney’s senior prom.

Courtney rolled to a degree in business administration at Marquette University and got married in 2003. Bank of America hired her in 2004. She works with mid-sized companies in all aspects of commercial banking and achieved VP senior relationship manager status in 2012.

“Seeing companies transform and pivot during the pandemic has been extremely rewarding,” she says. “We’re working closely with companies, helping them in these challenging times. We’ve seen growth, in addition to changes in their thought process.”

Being in a work from home environment has not disrupted Loacker’s strict ultramarathon training regimen in the least. Before tapering in October ahead of the Tunnel Hill 100, Loacker would run five miles on most weekday mornings and follow that up with 10 more in the afternoon. Weekends in September? Eighteen miles on Saturday, followed by five more on Sunday.

“My husband has been great,” she says. “When I run in the morning, Erich runs the circus—taking care of the kids—at home.

“I’m a lot tougher than I had given myself credit for before I started running seriously. There’s more grit in me than I had imagined.”