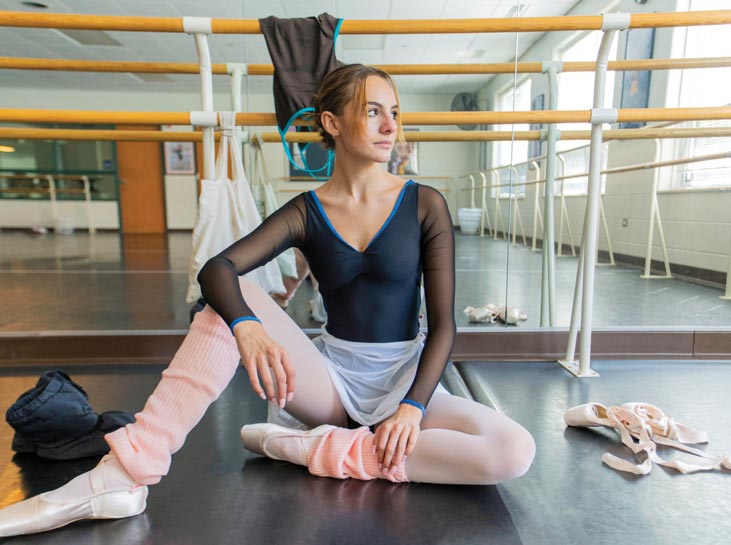 LAKE FOREST Dance Academy alumna Hannah Franzen took her first dance class at the age of 11. That is not late to the party—that is showing up for a centennial celebration in Year 150. Inspired and undeterred, she became super serious about ballet one year later. Her natural talent for and innate love of artistic dance more than made up for her relative tardiness to the world of pointe shoes and pirouettes.

“I’m a lanky gal, and when I was young, I was all arms and legs, no torso, never athletic,” the affable, 5-foot-8 Franzen says, adding her attempts to turn coaches’ heads in field hockey and soccer yielded blank looks instead. “That first dance class at LFDA, I came out of there thinking, Wow, I’m finally pretty good at something. I couldn’t wait to tell my parents how excited I was. My instructors, they were so great, always positive, always encouraging. I loved their guidance and feedback.”

A couple of years later—when her hometown friends were gearing up to enter Lake Forest High School as freshmen—Franzen was stuffing suitcases for the 350- mile trip to Michigan’s Interlochen Academy for the Arts, where she attended the renowned boarding school as a dance major.

She had to grow up in a New York millisecond, bonding with IAA classmates and faculty who became her de-facto family. Franzen’s ballet skills grew exponentially. She performed the coveted roles of Arabian in The Nutcracker and Pas de Trois in Swan Lake, and danced featured roles in Raymonda. During spring break of her junior year, ballet gold struck: Colorado Ballet offered Franzen a position in their Academy’s pre-professional division. In quick succession, she was granted early graduation from Interlochen, spent the summer dancing at San Francisco Ballet’s summer intensive, and took off for the Rockies.

Colorado did not turn out to be her dream destination.

Franzen was informed in March, after the pandemic hit, that Colorado Ballet would not be renewing her contract. She had been dreaming—for years, at night and with her eyes wide open during the day—of a professional career in ballet. Now the pandemic had turned studios’ lights off for months and the crucial in-person audition season was a thing of the past.

“I was devastated, at first,” admits Franzen, the self-described “annoying kid” who would shush disruptive classmates because she considered—and still considers—every minute of every class precious to her development in a discipline that demands undivided attention. “I was put through a trial. I needed to find a place to train. As a dancer, you have to know, though, that everybody in ballet has to deal with rejection. Hearing the kind of news I heard from Colorado Ballet wasn’t unique to me.”

But during the dark days of early quarantine, with far too much time to think, doubt began to surface as she searched for that aforementioned new place to train. The last question she had ever wanted to ask herself loomed large in her mind: Should I quit ballet? 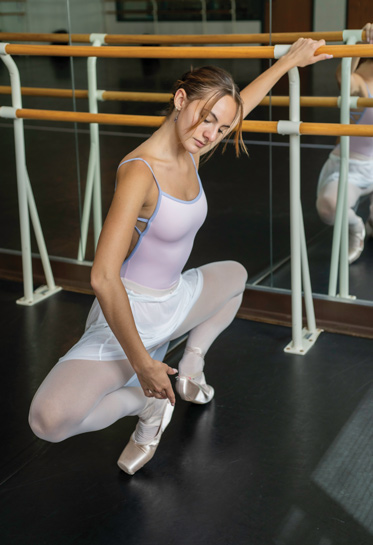 Franzen in a grand plié

Franzen, with time, answered her crossroads ballet question with an emphatic “no.” Quitting her No. 1 passion was off the … stage. For good. She emailed audition videos and cover letters to her dream academies in the spring, wanting the email recipients to know that her dedication to the elegant craft would tornado the doors off their institutions. The Washington School of Ballet in D.C. was sold. So was the Joffrey Academy of Dance’s Conservatory in Chicago, who accepted Franzen in July.

She jumped at the Joffrey offer and probably executed at least a pair of perfect jetes for good measure. Her first day at the Exelon Education Center at Joffrey Tower was September 8.

“Excited, really excited,” says Franzen, a hyper-mobile ballet dancer with bendy feet and a genuine effusiveness. “It’s an amazing school, an amazing opportunity to train with new teachers in beautiful studios and to develop new relationships. Its academy group is quite small, 10 to 14. I like that; it allows instructors to pay close attention to each dancer.”

She can now look back on her untethered time at home during quarantine with a new lens.

“I truly enjoyed being a regular teenager this summer,” says Franzen, who ate healthy fare and made time to work out regularly in her family basement’s makeshift gym during the sweltering months. “It was so fun hanging out with my friends and spending time in Lake Forest with them. But you know what? I found myself thinking, late in the summer, I’m ready to get back to work. I love what I do. I had missed the grind. When I’m in a studio, working my hardest, there’s nothing like the euphoria I feel when something starts to click. I almost feel like I’m floating, with my body moving faster than my brain.”

“I crave that feeling.”