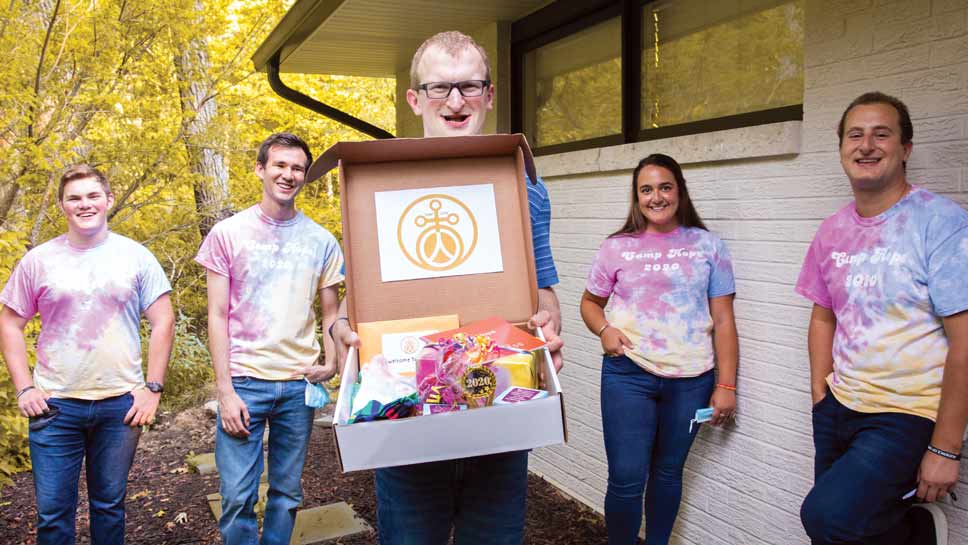 WHEN WORD CAME down in the spring that Camp Hope would have to be virtual this summer, even its steadfast supporters doubted it could work. “Camp Hope has the ability to make you feel as if you’re experiencing heaven on earth,” says long-time Camp Hope leader Joseph Santello. “We just didn’t know if we could recreate online what we feel when we’re all together at camp.”

But somehow, they did it.

To take a step back, Camp Hope is a five-day residential and recreational summer camp for adolescents and young adults with varying disabilities that is typically offered to about 50 campers over two weeks in July. It was started more than a decade ago in Lake Forest within the Church of St. Mary’s youth group. Camp Hope strives to give its campers a traditional summer camp experience, while providing their parents a much-needed break from the care many of the campers need. In their place, each camper is matched with a high school or college-age “buddy” who gives one-on-one attention to the camper for the week.

“We started meeting weekly this spring to figure out if it would even be possible to pull off a virtual summer camp,” explains Abby Bowman, who along with Santello and Kelli Jacobs, leads a group of young volunteers to make Camp Hope happen. “Our board really believed we could do this and did anything and everything to free us up so we could.”

Because Bowman, Santello, and Jacobs were all having to adapt to a virtual experience for their day jobs in education, sales, and communications, they were able to leverage what they learned about various online platforms and put this to work in structuring a camp experience.

“One critical step we took was to survey the campers’ parents to see if this was something they would be interested in,” says Jacobs. “We had to see if parents would be available to help their children log in, as well as if they had the technology at home to even make this a possibility.”

Once the team had an idea of what they were working with, they set off to create a plan that would make Camp Hope easy for parents to oversee.

“It wasn’t lost on us at all that we were going to need parents to be involved in order for this to work,” Bowman says. “And this goes directly against one of Camp Hope’s pillars to be a respite for these families. But what most parents told us was that their families needed some form of Camp Hope this summer—even if it was online.”

The team decided that Camp Hope would run for one week, with two one-hour sessions—one at lunch time and one later in the evening. Prior to camp starting, each camper received a box that was personally delivered by a Camp Hope buddy that included everything that would be needed for the week of activities. Additionally, each camper received a unique gift so they knew they were being thought of, as well as a photo book from last year’s camp.

“I loved putting together these boxes,” adds Bowman. “We all met in Andrea Perino’s garage for a box-making party and it was so much fun envisioning what the campers would think when they opened their boxes. Ann Burke literally had hundreds of things delivered to her house that we used to put them together. We couldn’t have done camp without these two amazing ladies.”

The last piece of the puzzle was convincing the campers that being together online was going to be as much fun as being on-site at camp.

“Lillie Romeiser, one of our former directors, put together a six-minute video to show the campers how great Camp Hope 2020 could be,” says Santello. “I talked with one of my favorite campers, Matt Carr, after he watched it. He said ‘Joseph, this is going to be ok,’ with the same excitement he brings to camp every summer. I knew he was right.”

So, camp kicked off with nearly all of its players from past years on both the camper and buddy sides. Each day, Camp Hope happened virtually with its arts and crafts, singalongs, disco parties, talent shows, s’mores making, and gift exchanges.

“I think we surprised ourselves at how well it went,” says Jacobs. “There was definitely some plan shifting and situation adapting that took place in real time if we sensed something wasn’t working, but what we really found out was how much the campers liked seeing each other and us online. Most of the time when we’d be done with a session, campers would ask if they could just hang out a little bit longer. It was so great to watch.”

Parents thoroughly enjoyed the sneak peeks they were given.

“We heard over and over in our feedback after camp how grateful parents were to see how this all worked,” Bowman says. “Even though it wasn’t exactly the same, parents could see the relationships the campers have with each other and what makes Camp Hope so special.”

Although there will never be a real replacement for two weeks of in-person summer camp for the Camp Hope community, this year—when they had to—they came pretty darn close.

“That magic that happens at Camp Hope, it was real this year,” says Santello. “I know we’ll all be feeling it until we’re back together next summer.”