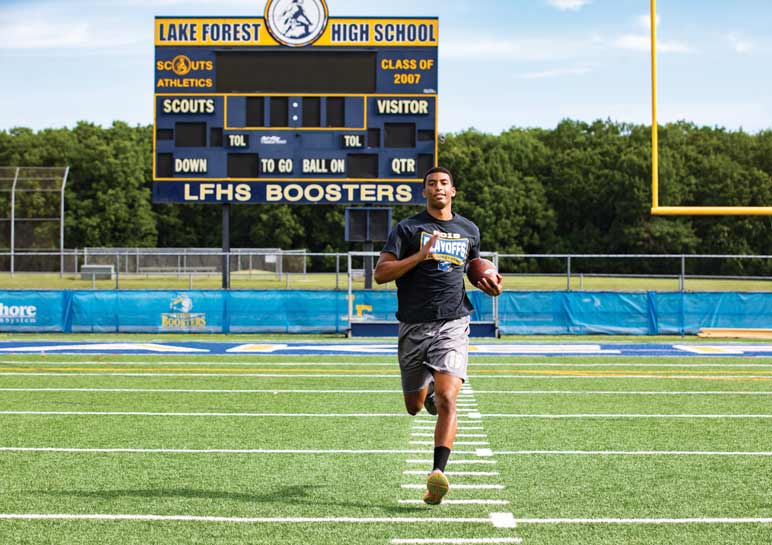 That’s akin to Paul Bunyan wanting to appear inconspicuous in a sandbox.

You see, Williams stood 6-foot-7 and weighed more than 300 pounds when he created countless acres of running room for NFL ball carriers from 1991-2002, and—before agreeing to serve as an assistant varsity football coach at Lake Forest High School in 2019—needed to be assured that his son, LFHS outside linebacker/tight end Jai Williams (Class of 2020), would not lose focus with a certain former Bear roaming around at practices and games.

“Jai and I sat down and had a long conversation,” recalls the father, an assistant football coach at Deerfield High School from 2017-18. “I wanted him to enjoy his senior season, without feeling any pressure to perform well near me.” Jai (pronounced “Ji”) eased his father’s concerns and welcomed his presence, figuring one of the “100 Greatest Bears of All-Time” would be a good thing—okay, a huge benefit—for the Scouts’ offensive linemen and the team’s quest to earn a 10th straight playoff berth.

A senior co-captain and member of all four special teams, in addition to his linebacker and tight end roles, the 6-foot-4, 205-pound Williams helped LFHS (7-5) reach a Class 6A state quarterfinal and earned all-North Suburban Conference honors last fall. He was also chosen to suit up for the Illinois High School All-Star Shrine football game in Bloomington and accepted preferred walk-on status, as an outside linebacker, from the University of Kentucky, a member of the perennially talent-packed Southeastern Conference and a program that capped an 8-5 season with a Belk Bowl victory in 2019.

“It was cool, having my dad around and seeing him at our games,” Jai says. “I liked seeing him on our sideline each game. My junior year he wasn’t able to attend all of my games because of his commitment to Deerfield’s football team. During games my senior year he’d only give me a hard time, with a look, if I missed a block or didn’t block well on a play.”

James Williams laughs. Yes, he admits, his son certainly understood the messages that “look” must have conveyed in 2019. But James has another confession.

The elder Williams had the good fortune of witnessing one of the most memorable—and most unusual—touchdowns in LFHS history in his final season on Deerfield’s football staff. It secured another postseason berth in 2018. It also involved Jai’s hands and a teammate’s foot, and it took place against Stevenson High School in Lincolnshire. Jai scored the game-winning touchdown on a 12-yard reception in a breathless 26-23 victory, after a pass thrown by Tommy Hanson had glanced off wideout Ryan Cekay’s left wheel in the end zone.

“Right place, right time,” says the modest Jai, refusing to take any credit for being alert and nimble at a pivotal juncture in the fourth quarter of the regular-season finale.

“I was watching,” James says, “from a spot near the other end zone. I didn’t get a great look at Jai’s catch. What I clearly saw was all the players celebrating after the TD.” 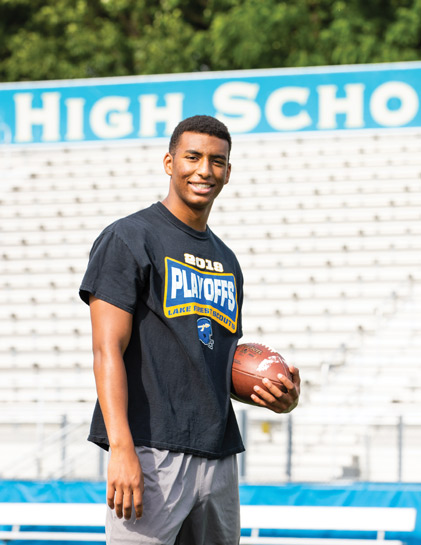 Jai Williams, who’s interested in majoring in architecture, plans to primarily prevent TDs at the next level. He was scheduled to report to the University of Kentucky for preseason camp on August 8, pandemic permitting. At a few hamburgers heavier than 200 pounds, Williams is light for a Division I outside linebacker.

“I told all of the college recruiters who stopped by the school that Jai’s best football is in front of him,” Spagnoli says. “He’ll be a bigger and better player in a couple of years, no question; you won’t recognize him.

“Jai,” the coach adds, “moves well for a player his size, and he worked as hard as he possibly could in his seasons with us. I have nothing but respect for him.”

Something special, from Spagnoli’s perspective, during the 2019 season: any interaction between Big Cat and the future Wildcat.

“Not many fathers and sons get the opportunities to experience what they did,” Spagnoli says. “I’m glad I witnessed the moments; they were heartfelt. You could tell family is important to both of them.”