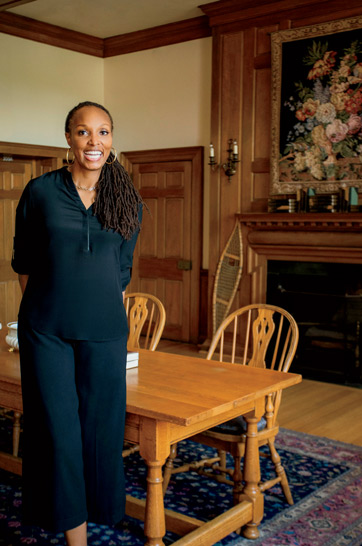 Six years ago, Dr. Chala Holland, Lake Forest High School’s principal, started her new career and her passion to make Lake Forest High School a place of validation, affirmation, and growth for all kids. The Ardmore, Pennsylvania native believes that education has the potential to shift life trajectories. She understands that education can help people learn about themselves personally, and in relation to other people and the rest of the world. She sees this as profoundly powerful. And one of the most important areas of this is inclusion.

“We really want to ensure that we are focusing on all of our students, not some, with the exception of others, but all of them,” says Holland.

She has always thought it important to meet students where they are in life. Students in high school are navigating social pressures, community pressure, and peer pressure.

“Part of that is to be attentive to who they are as people,” she states. “We should create a space where we’re listening, paying attention, and making sure students feel validated and affirmed in every aspect, not just by saying things, but by partnering with students to create a place where they know and feel that they belong.”

Believing that every student deserves to be educated alongside their peers is a core belief.

“None of us are the same,” says Holland. “All of us have a variety of different learning needs, and I do think that’s how we have to look at how we collectively support students.”

Six years later, the district has made true progress.

“For example, when I arrived, we had a significant number of students who were receiving special education services,” Holland says. “And during my time at the high school, we’ve been able to decrease that amount by 5%.” 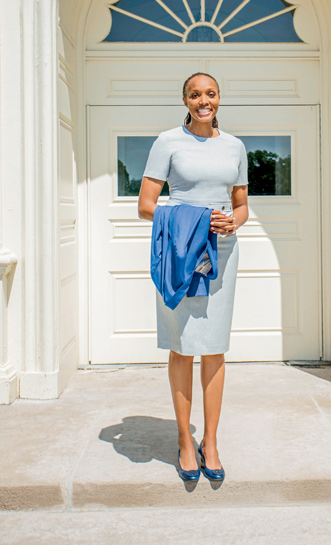 “And so that’s a huge shift. Because we didn’t have some fundamental supports in place that would benefit every kid—targeted and more intensive supports— students were being recommended disproportionately for special education,” she says. “By implementing tiered supports, we were able to gain a better understanding (with evidence) of the students who really needed that level of support and services.”

Holland says she’s very proud of the work the district has been doing to change things so that they reach all students, academically, socially, and emotionally. She believes in wholeheartedly adhering to the needs of her students and sees every kid as her responsibility.

“Engaging these types of changes required an entire systems-approach, from shifts in leadership, shifts in instruction, to shifts in our practices, our beliefs, and our values,” Holland adds. “Basically, it required us to really put our actions where our beliefs and our values were.”

Five years ago, her critics argued against her holistic approach to education. There was a change.org petition against her hiring. There were protests that she wanted to “bring down the AP system.” There were waves of press, criticism, and apprehension. Some in the district were extremely concerned about her plans. Now? She seems to have won them over. Her practice of inclusion, not exclusion, of everyone is hard to argue against.

“Our work around inclusion really focuses on membership, which connects to students having a sense of belonging,” she says. “It connects to engagement, how we’re bringing kids into the fold inside and outside of the classroom, and how we’re encouraging them to participate and be active members. I do think we should always go over and beyond for every single student that comes into the school, and that’s what this work has been about for us.”

To some, this might be enough for a fulfilling life. But Holland is one of those people who practices what she preaches. “I love to work out. I love sports, music, art. I love learning and growing so I like to take classes to further my education” she says.

“I have a lot of things that I’m interested in and actually still engaged in outside of work, but I think all of those things—all of my hobbies and all of my areas of interest—also show up with me every single day in school. As they should.”

Holland strives to live life in a way that is healthy and fulfilling for her. In doing so, she encourages her students to do the same.

“I embrace all parts of who I am—my race, my gender, my faith, my hobbies,” she shares. “I think it’s important to stay true to who I am and not allow a place, space, or experience to take away from that or try to suppress parts of what makes me, me.”

“And my hope is that kids in high school, if they run up against adversity, any type of adversity, that they go towards it and not away from it,” Holland says. “I think it’s important to stand and be okay with who you are and not waver.”

This school year brought unprecedented adversity to Holland and her students in the form of Coronavirus.

“Everyone experienced something in common that has shifted everyone’s life,” she says. “We’re looking at how we can be attentive to a variety of needs as well as making sure that our students and staff feel supported and have what they need to navigate all the things that come up with them, emotionally and socially, because of the pandemic.”

Holland knows the pandemic has put things in perspective in terms of what is important.

Six years later, she reflects that what she expressed before being hired is now a recap of what she has continued to prioritize and work to fulfill. “Recognizing the unique gifts that each of our kids bring every single day and working to maximize the potential of each student,” she says, “is what gets me fired up about coming to work every day.”