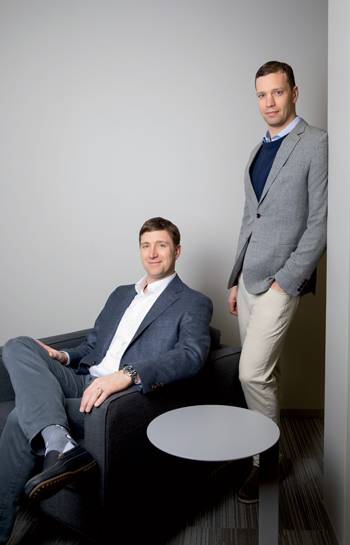 If you’re lucky enough to be invited to a family gathering at the Lake Forest home of Ed and Nancy Hamming and are in need of some medical attention, you’re in the right place. Ed, David, and Mark Hamming are orthopedic surgeons, Nancy is an ophthalmologist, and David’s wife, Katherine, is a pediatric otolaryngologist.

“To be honest, I don’t think I thought much about being a doctor when I was young even though both my parents were,” says Dr. Mark Hamming. “My parents didn’t talk much about work and both did such an incredible job balancing their demanding jobs with my brother, sister, and me.”

It wasn’t until Mark was a freshman in high school that he got to see his dad in action. “We were on spring break in Snowmass skiing and I broke my leg,” he says. “My dad took me down the mountain in a toboggan and then casted my leg right there at the mountain’s base. It healed perfectly.”

Today Mark and his brother Dr. David Hamming, who is three years older, work together in a practice dedicated to orthopedic medicine founded by their father Dr. Ed Hamming and their uncle, Dr. Bruce Hamming. The elder Hammings blended their practice with another surgical group that is today called Illinois Bone and Joint Institute (IBJI).

“When we were in high school, we used to work up in the hospital’s OR [operating room] in the summers,” David recalls. “That early exposure to medicine and the inner workings of the hospital definitely made an impression on us.”

Both David and Mark were accomplished high school athletes, receiving a number of commendations and state honors during their years at Lake Forest High School.

“The nature of orthopedics tends to draw those with an interest in sports,” Mark says. And depending on where they practice, being an athlete comes in handy for orthopedic doctors.

Following medical school and residency, both David and Mark had medical fellowships at the Steadman Hawkins Clinic that provided the official team doctors for the Denver Broncos and Colorado Rockies, as well as athletes training for the Olympics.

Mark was one of the team doctors that traveled with the Olympic ski team training for Sochi in 2014. He spent time with the team in Chili, New Zealand, and Slovakia, as well as training courses throughout the U. S.

“I was very comfortable skiing and that was pretty much a job requirement when working with the team,” Mark says. “We’d travel up these runs with the athletes and at the end of the day we’d have to ski down these mountains that were like ice rinks with 60-pound packs on our back. The athletes lived right on the edge and they used to like to see what the doctors could do. One German doctor accepted the challenge when we were in Chili and he ended up breaking his femur. I did double time that trip.”

But the life of a team doctor, with all of its excitement and in-the-field lessons, isn’t easy. So, both David and Mark, who today have growing families, made the decision to come back to their hometown of Lake Forest and join their father’s practice.

“It was interesting to become colleagues with men I’d known since I was a teenager,” explains David. “That probably made my transition into the group easier than most since there we already had such a good rapport with each other.”

Although both Dr. Ed and Dr. Bruce Hamming have since retired, David and Mark did get to work for several years with them before their careers with IBJI came to an end.

“There was actually a surgery where David, my dad, and I were all in the operating room together,” Mark remembers. “They didn’t really need all of us, but it was a chance for us to scrub in together so we did.”

But more than their father’s surgical techniques, it’s how their father treated patients and co-workers that is the legacy his sons want to continue.

“My dad had this way of making his patients feel like he had all day to talk with them. He really cared,” David says. “Surgeons also have a bad rap for not always treating the hospital staff with the respect they deserve. My dad wouldn’t tolerate that and we won’t either.”

Both brothers now enjoy being team doctors at a number of area high schools, while seeing patients from the community. “It’s pretty neat how this has all come full circle,” adds David. “When I see kids from Deer Path Middle School, I like to tell them how I went there. It’s great to be able
to see these kids in the office and then follow their care.”

While the brothers claim they chose their specialties independent of one another—never considering their mother’s ophthalmology path because of their “fear of operating on eyeballs”—they find great comfort practicing together.

“I think both David and I feel so lucky to have the colleagues that we do,” Mark explains. “They all are truly amazing. But to be able to run things by my brother is on a whole different level. Last week, I found the X-ray from when I broke my leg. Without telling him it was mine, I asked David how he would handle this broken leg of a 15-year-old kid. He said he would “cast it’,” Mark says with a laugh. “He gave the right answer. Dad would be proud.”