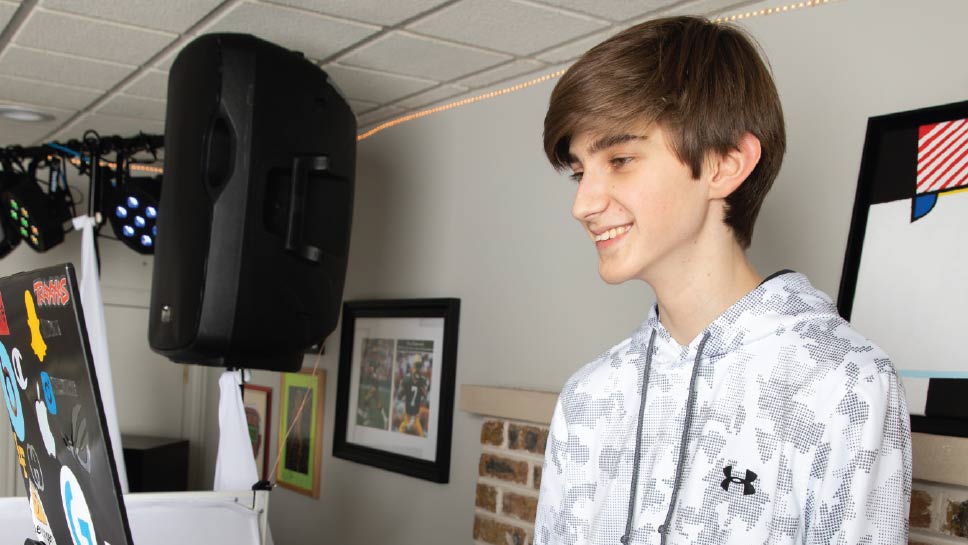 A Lake Forest teen navigates his freshman year by building a name for himself as a professional DJ. PHOTOGRAPHY BY ROBIN SUBAR

Last spring when Heather Fowler was asking friends how to make sure her son Aidan was ready for his freshman year at Lake Forest High School, she got lots of advice.

“The thing people said to me over and over was that Aidan should do a fall sport,” she says. “My friends thought this was the best way for Aidan to meet a lot of other kids since he was coming from St. Mary’s.”

But Aidan had other ideas.

Even though he was an avid golfer, he was drawn to music. A long-time follower of music disc jockeys on YouTube, Aidan thought that mixing music looked like a lot more fun than making it. So, with some money he received as a gift for his Confirmation last April, he bought his first piece of DJ equipment.

“I’ve always been more of hands-on learner,” says Aidan. “I like being able to play around with all of the cords and knobs to make it work. It wasn’t quite as easy as I thought.”

But Aidan is being modest. For a 14-year-old teenager, he is self-taught on his growing allotment of equipment. “It usually takes me two weeks to really figure out how the pieces work together. But it’s fun for me. It doesn’t feel like work.”

And that part is clear. Aidan is a self-proclaimed “techy” and the machinery of his DJ life is just as exciting to him as entertaining guests.

“The lights are actually way harder to work with than the controller and mixer,” he explains. “I like when the lights to match the music—this is what makes what I do a show. The lights are just as important as the music I play.”

Aidan stays on top of all the new music releases and invests his extra spending money into elements that make his DJ set up more professional. He recently purchased some “scrims” to disguise some of the cording and mechanisms used to hold his machinery.

“We are so proud that Aidan has found something he is so passionate about,” his mother Heather says. “He is thinking about it all of the time. When you ask him a question about being a DJ, you get a very detailed answer. Sometimes when we ask him about school work, not so much.”

“DJ Aidan Fowler,” as he’s known among the locals, is making quite a name for himself. He recently played at a grade school dance for 300 in Libertyville, donated his DJ services to the Spirit of 67, and has been tapped for some DJ duties at Lake Bluff’s 4th of July festivities this summer.

When asked if he gets nervous before working a gig, Aidan shakes his head no. “I always try to get to the site a little early and get everything set up,” he explains. “I then do a sound check so I don’t blow out anyone’s ears. Once I get that right, I don’t really worry. I do know that I need to invest in some equipment to get my gear from place to place. I’m not sure what I would do if my dad couldn’t help me.”

Even though Aidan is new to the industry, he has a strategy for how he plays his music to make sure everyone hits the dance floor. “I like to play some older songs that people recognize and put them in a good mood and then I’ll follow it up with a song that’s really popular now,” he says, acknowledging he’s playing a lot of Roddy Rich these days. “It’s hip-hop, but it’s cleaner than most. But it gets everyone going and when I see people out there dancing, I know that I’m doing a good job.”

Although his mom has dreams he might one day grow up to be the architect he once talked about, Aidan pictures himself spinning tunes on a big stage at Coachella, California’s largest music festival.

“That would be so cool,” he says, surely picturing that far-off day in his head.